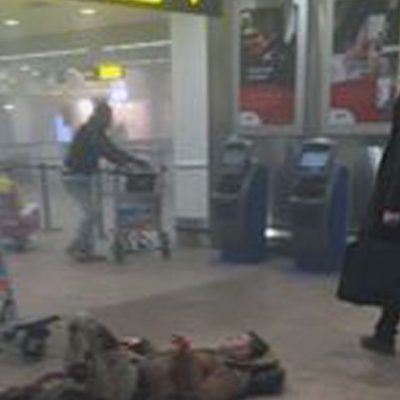 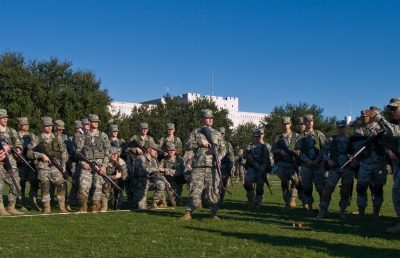 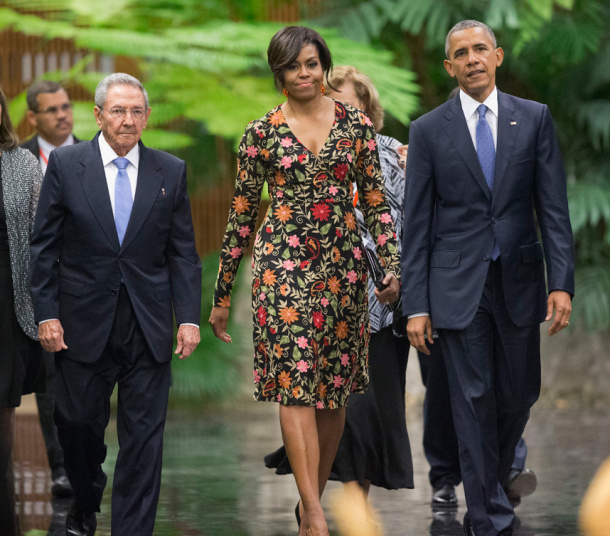 The Obamas went on a much-maligned trip to Cuba, rubbing elbows with Raul Castro. The administration showed excitement and enthusiasm about spending their Spring Break with a brutal dictator, even as hundreds of refugees continued to risk their lives to flee the regime, and countless others are held in prisons where they are beaten and tortured. The Castro regime has committed genocide against its citizens, aided by the left’s murderous idol, Che Guevara. Indeed, there is no shortage of atrocities in Cuba, with countless human rights violations given legitimacy by our useful idiot of a president. On top of all that, Cuban residents live in extreme poverty. So of course, it was the perfect time for Michelle Obama to flaunt her wealth with thousand dollar designer dresses.

When the president and his family landed in Cuba Sunday, the first lady descended Air Force One wearing a sleeveless, rose-print dress made by designer Carolina Herrera. The dress is currently sold for $2,190 at Bergdorf Goodman, an upscale department store.

Later, on Monday evening, Obama dressed in a floral, knee-length dress from designer Naeem Khan to attend the state dinner at the Palace of the Revolution in Havana, Cuba. A similar frock from Naeem Khan, a Barack Obama donor, available in the designer’s pre-fall 2016 collection costs $4,490.

Over 12 months, therefore, the average employee’s wages in Cuba totaled $288 in 2014. The Carolina Herrera dress Michelle Obama wore when arriving in Cuba Sunday costs nearly eight times this amount. The Naeem Khan dress costs almost 16 times this amount. The total price tag of the two outfits, thus, is more than 23 times the average annual salary in Cuba estimated in 2014.

Nice going, Michelle. You can see the dresses for yourself here:

Like a denser, Caribbean version of Detroit, the better-off central neighborhoods had rotting, caved-in buildings, porous infrastructure, and pervasive grime. In the outer slums, living conditions were even worse — similar to Third World favelas.

They often don’t have access to clean drinking water, or hot water. Food is rationed. Getting basic necessities or household goods takes months and months, if not years, of saving. There is no internet access, because most Cubans can’t afford it. Things that we take for granted, like soap and toilet paper, are considered luxuries. Many women are forced to prostitute themselves just to survive.

For those less fortunate, the only way to make some extra cash or eat a decent meal can often be to sell their body to a – usually much older – European or Canadian tourist.

This reality hits you as soon as you step inside a restaurant or hotel in Havana. In every direction are girls who look no more than 16 accompanied by sagging and pale tourists approaching pension age. For at least some of these western tourists who flock to Cuba each year, the failure of communist economics has been the greatest boon to their sex lives since Sir Simon Campbell accidentally stumbled across the formula for Viagra. These decrepit lotharios often look like something the Caribbean Sea has puked up; but it hardly matters, for if you are a poor Cuban, all you see is the next meal (and if you are really lucky, marriage and a ticket off the island).

Arthur Koestler once referred to pro-Soviet communists in the rich world as voyeurs, peeping through a hole in the wall at history while not having to experience it themselves. The Stalin Society is a lot smaller today (though you can still find the Cuba Solidarity stall at Labour party conference) but the mindset persists: Cubans are the unwilling participants in a communist experiment, there mainly for affluent westerners to gawk at and, when the ‘chemistry’ is right (i.e. when you’ve paid for everything) to take back to the hotel room.

And here comes Michelle Obama, prancing around in designer dresses as these people live in fear for their lives, struggling to be able to feed their families, reduced to prostitution and hoping that the buildings they live in don’t collapse around them. Tone-deaf isn’t a strong enough phrase to describe this clueless woman. But then, she’s just following the lead of her despicable husband, who went out of his way to validate the Castro regime. What’s adding a little insult to injury?