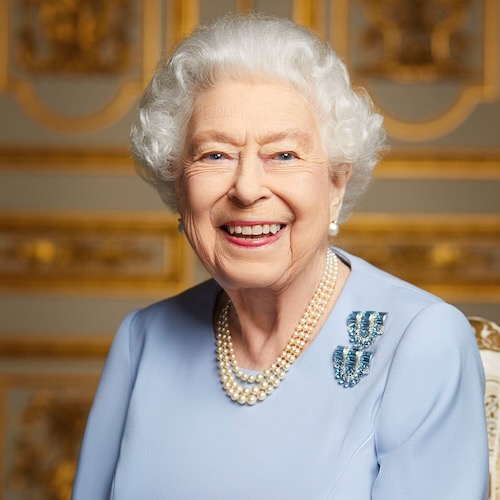 Queen Elizabeth II was laid to rest today. It was a day of honor, respect, and tears for a woman who impacted the world in innumerable ways.

As we did on September 8, we can point out the impact Queen Elizabeth had on the Commonwealth and the world during her 70 year reign. But to see the hundreds of thousands of people line up for over 14 hours to pay their respects these last four and a half days was incredibly moving.

As she had done for the entirety of her reign, everything about her coffin symbolized both the Monarchy and Queen Elizabeth II herself.

At The King's request, the wreath contains foliage of Rosemary, English Oak and Myrtle (cut from a plant grown from Myrtle in The Queen's wedding bouquet) and flowers, in shades of gold, pink and deep burgundy, with touches of white, cut from the gardens of Royal Residences. pic.twitter.com/5RteIWahuW

Around 100,000 people have gathered on The Long Walk in Windsor to say goodbye to The Queen. pic.twitter.com/8KvRJqtRNN

And that did not include all those who were outside Westminster Abbey and Buckingham Palace.

The funeral at Westminster Abbey, the first in over 200 years, held 2,000 heads of State and other dignitaries. All in attendance as the Royal Family said their goodbyes to their Queen, their mother, their grandmother and great grandmother (‘Gan-Gan’).

Heir-to-the-throne, George, nine, and his younger sister Charlotte, seven, joined senior royals at the historic event, beginning their day bypassing thousands of mourners on the streets of London as they travelled to Westminster Abbey with the Queen Consort and the Princess of Wales.

Kate, clearly aware that her two elder children would find the day emotionally difficult, provided a constant source of comfort to George and his younger sister, who wore a smart black hat with a bow and a horseshoe brooch given to her by the late Queen, as they prepared to bid a final farewell to their beloved ‘Gan-Gan’.

It was clear from the first sighting of the siblings, who travelled in a royal car with their parents, the Prince and Princess of Wales, before later transferring to a procession car with Kate Middleton and Camilla that both children appeared to grasp the enormity of the day in spite of their tender years.

Two of the Queen’s beloved corgis welcomed her home to her final resting place.

Queen Elizabeth II’s corgis welcomed their late owner back to her royal residence, as they stood by during the monarch’s funeral procession.

The pair of beloved dogs, Muick and Sandy, were seen Monday as Elizabeth’s hearse made its way to St. George’s Chapel at Windsor Castle as part of her state funeral. Barks were heard as the canine duo were held on leashes by staffers.

This was a lovely tribute to both Queen Elizabeth II and all those she served so well.

A day of profound sorrow, and tears, but of beauty and celebration for an extraordinary and historic life.

Our country and much of the world will come to a halt, or a pause at least, to mourn.

It is hard for Britons to fully comprehend our Queen’s global fame.

By the end of the day — after millions, including 2,000 VIPs, have descended on ­London and Windsor from across the world and as much as half the planet’s population have watched on TV — it may finally have sunk in.

I don’t know that it will sink in for quite a while, but for those who paid their respects, it was an honor and experience they’ll never forget. The wait in line was hours long, but many described it as a pilgrimage to honor a woman who was their guiding hand.

“She’s been there all my life, a very steady pair of hands, a very steadying force in extremely turbulent times,” Murrell told PEOPLE. “One thing that really strikes me is she had integrity. It’s a rare thing nowadays and it will be her legacy.”

Queen Elizabeth II has indeed left both the Commonwealth and the world a legacy of faith, courage, honor, and integrity.

The Queen’s Piper plays a lament from the North Quire Aisle, the sound of which slowly fades as those inside St. George's Chapel remember Queen Elizabeth II. pic.twitter.com/Rc2t1w0K2e

Queen Elizabeth II served her country up until the day she died. We will indeed never see one such as she again.

RIP Your Majesty, and thank you for your service and the example you set for the world.