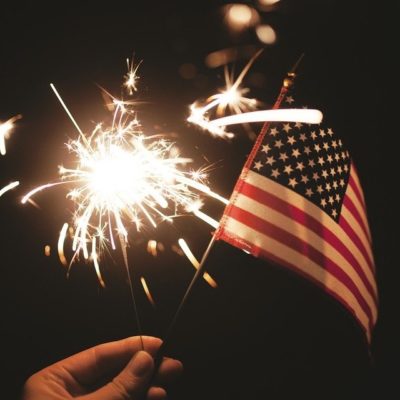 Today is a day to protest. Yes, really. But do it like Americans.

Now, I’m not talking about the mixed messaging that is coming from elected officials, who are so badly trying to keep coronavirus numbers down while allowing social justice protesting.

We’re going to have to celebrate differently this year. Everyone should cancel plans with others for the 4th of July. You shouldn’t gather with anyone who doesn’t live in your household.

Please stay home and save lives — it’s that simple.

The city is prohibiting a gathering in one place and blocking off the streets in another to provide for a gathering of 1,000? pic.twitter.com/Sqphc8FFd9

Now, this is not to say that protesting like an American should involve risks with one’s health or safety. You can definitely protest without even setting foot outside your door. So, let’s consider all the ways that an American should protest on Independence Day.

Oh, what are we protesting? The tyranny of King George III, of course. So if you decide to have a backyard barbecue today, and the neighbors complain, tell them that you are protesting the unjust rule of government. Leave it up to their own minds whether you are talking about Great Britain or your current city government. But if you are choosing not to gather with anyone for a myriad of reasons, here’s what you can do to protest for America.

1) Flood social media with American flags and music.
Hang a flag and take a picture. Post it to every media platform you’re on. Post videos of big sweeping concerts of years past that celebrate America. Post this absolutely great video by Black Rifle Coffee Company.

Right now, we are engaged in a battle with the media, and social media is one of the battlegrounds. It’s time to fill it up with the images and sounds of American exceptionalism. I can’t tell you how many teenagers are on social media right now, being bombarded with anti-American loathing for Independence Day. It’s time for us to protest proudly on behalf of our country on that same battlefield.

2) Watch a movie that tells or shows something important about our history with those who live with you.
There are so many options here. But since I have young children, movies like “The Patriot” or “Glory” are not on my list right now. We make a habit of watching “This Is America, Charlie Brown: The Birth of the Constitution” and the Disney classic “Ben & Me” on Independence Day. Watch movies about great Americans (always making allowances for age) like Jackie Robinson and Harriet Tubman and John Adams. You want to protest against the ignorance of the mob that is tearing down statues? Make sure that the kids around you know American history – and do it in the most entertaining and fun way possible.

3) Act like you are proud all year long.
How about not taking down the flag when the day is over? How about not concealing your love of country for fear of offending someone? How about not being ashamed of the faults of our past, but showing a willingness to go forward in grace and strive toward the ideals laid out by our Founding Fathers in the the future? We proclaim our allegiance in so many ways – we wear the logos of our favorite sports teams, the colors of our alma maters, slap bumper stickers with catchy slogans on our cars, and choose to spend our money on certain items. Proclaim and protest the awesomeness of the American experiment every day like you believe it.

THAT’S how you protest like an American. You can acknowledge the country’s faults without throwing out every single good thing about it. Despite the cloak of social justice holiness that people like Robin DiAngelo and the mob of writers at the New “Woke” Times wrap themselves in, they are sinners just as much of any of us, busy pointing out the specks in others without removing the planks in their own eyes. Being American means believing that you are equal to every other American, not better, and not lesser.