Recently, Argentinian Pope Francis has decided to join the ranks  of socially progressive academia, the artistic community, corporate, and the political elite to present Climate Change as one of the most perilous conditions facing mankind. In 2015, the Pontiff plans to address the 1.2 billion Catholics worldwide and impress upon them the moral and social imperative to view the impending disastrous “global warming” as a threat of the first order to the fate of man and the Earth as we know it. As reported by The Guardian:

“In 2015, the pope will issue a lengthy message on the subject to the world’s 1.2 billion Catholics, give an address to the UN general assembly and call a summit of the world’s main religions.

The reason for such frenetic activity, says Bishop Marcelo Sorondo, chancellor of the Vatican’s Pontifical Academy of Sciences, is the pope’s wish to directly influence next year’s crucial UN climate meeting in Paris, when countries will try to conclude 20 years of fraught negotiations with a universal commitment to reduce emissions.” 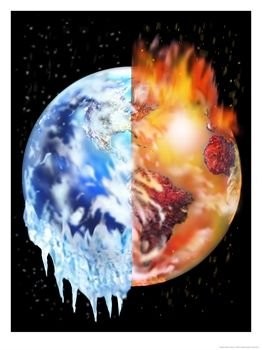 Those of us skeptical heretics and “deniers” aside, the real question begs to be asked: Has the Climate Change movement, whose zealous adherents remain faithful regardless of all the Global Warming model failures, the blatant lies and cover-ups of the Intergovernmental Panel on Climate Change (ICPP), and the fact that there has been no correlation found between rising CO2 levels and global warming/ climate change, finally found the spiritual leader for their state-sanctioned, world religion? The Guardian goes on to say that evangelical Christian organizations in the U.S. do not support the position the Pope is taking on Climate Change:

“Francis will also be opposed by the powerful US evangelical movement, said Calvin Beisner, spokesman for the conservative Cornwall Alliance for the Stewardship of Creation, which has declared the US environmental movement to be “un-biblical” and a false religion.

“The pope should back off,” he said. “The Catholic church is correct on the ethical principles but has been misled on the science. It follows that the policies the Vatican is promoting are incorrect. Our position reflects the views of millions of evangelical Christians in the US.”

Meanwhile, for such extraordinary measures to be taken by the reigning Pope of the Catholic Church on what many would say is a political or social issue, the “consensus” on Climate Change, even among those that support the belief, cannot seem to stop contradicting itself. Just a week ago, December 24th to be exact, White House Science Advisor John Holdren held a Q & A session in which he stated the following as reported by the Examiner:

“We know beyond any reasonable doubt that humans are the main cause of the warming of the earth’s climate that has been measured over the past few decades. The warming is unequivocal.

“While the climate of the earth has changed over the millennia as a result of natural factors – principally changes in the tilt and orientation of the earth’s axis and rotation, and in the shape of its orbit around the sun – those changes occur far too gradually to have noticeable effects over a period of mere decades. In their current phases, moreover, they would be gradually cooling the earth – taking us to another ice age – if they weren’t being more than offset by human-caused warming.”

Say what??? This is the Science Advisor to the White House? So, in essence, he’s stating that if we weren’t causing global warming through anthropogenic activity, we’d be headed for another ice age. Terry Hughes, glacier scientist and professor emeritus of earth sciences and climate change at the University of Maine, was quoted as stating this in the Capital Journal:

“The way to answer the question of whether human activity is driving climate change isn’t with a “yes” or “no.”

He prefers to answer: “It doesn’t matter.”

He goes on to explain that while he believes global warming is occurring, he also thinks that it is a positive rather than negative occurrence, as all the environmental alarmists and those that would profit most would have us believe. He continues:

Global warming would thaw permafrost, opening lands in the arctic and subarctic to a boom in economic development in Alaska, Canada and Russia. For example, Hughes said, 18 to 24 hours of summer sunshine would deliver two agricultural harvests per year.

Thawing permafrost would increase by one-seventh Earth’s landmass open to extensive human habitation. That would be a new frontier in the same way the New World was, and on a similar scale. At the same time, the portion of Earth open to two annual harvests would increase by two-sevenths, Hughes calculates.”

This, coming from a scientist that believes that global warming is happening. Nothing against the Pope, but it would seem to me the church’s concerns should be with the salvation of people’s souls from eternal damnation and not with their temporal, fleshly habitation of earthly bodies here. As for me, being the skeptic and “denier” that I am after doing my own extensive research, I tend to hold to the belief that this is all a Ponzi scheme designed to prey upon those that have a spiritual vacuum in their lives by giving them a self-righteous cause to embrace, and upon the rest of us by stripping away our individual rights and personal wealth, enabling the super rich to get richer, and the majority of humanity to grow more equal in our poverty worldwide.