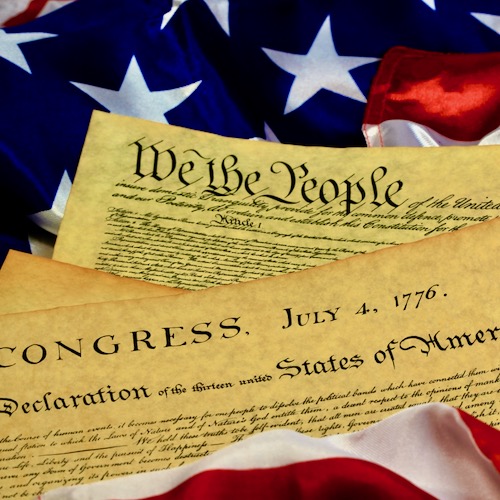 Our American story is that of Freedom.

“We hold these truths to be self-evident, that all men are created equal, that they are endowed by their Creator with certain unalienable Rights, that among these are Life, Liberty and the pursuit of Happiness.–That to secure these rights, Governments are instituted among Men, deriving their just powers from the consent of the governed”

Why did our Founders and my ancestors embrace those amazing words and take up the fight against the British? Because they realized that without Freedom, we wouldn’t have the Bill of Rights, instead we’d have no freedom other than what the government would deign to grant us. They understood that when our Founders signed the Declaration of Independence, and my ancestors understood that when they left their small farms on the east coast to join the American Revolution.

Against overwhelming odds, they prevailed. Then our Founders came together, all with differing views, all with their own ideas of how a new government should be. I’ve no doubt the discussions were rancorous at times, and I’d bet that there were several instances when papers were thrown down in disgust and people walked out of the room. But they prevailed because they ALL were intent on crafting a document that would give us a government FOR the people and run BY the people.

Today, however, we are being told our American story isn’t unique and should be destroyed. The divisive rhetoric, the censorship, and the very real worries about what the incoming Biden Administration is planning for our country is leading to ever growing concerns among all of us who love this Republic dearly.

Which is why I believe it is vitally important for us to arm ourselves with the words of wisdom from our Declaration, Constitution, Federalist Papers, and great Americans for the days to follow.

“All, too, will bear in mind this sacred principle, that though the will of the majority is in all cases to prevail, that will to be rightful must be reasonable; that the minority possess their equal rights, which equal law must protect, and to violate would be oppression.”

“All honor to Jefferson-to the man who, in the concrete pressure of a struggle for national independence by a single people, had the coolness, forecast, and capacity to introduce into a merely revolutionary document, an abstract truth, applicable to all men and all times, and so to embalm it there, that to-day, and in all coming days, it shall be a rebuke and a stumbling-block to the very harbingers of re-appearing tyranny and oppression.”

“I have said that the Declaration of Independence is the RINGBOLT to the chain of your nation’s destiny; so, indeed, I regard it. The principles contained in that instrument are saving principles. Stand by those principles, be true to them on all occasions, in. all places, against all foes, and at whatever cost.”

“`Hello, American sailor. Hello, freedom man.”
A small moment with a big meaning, a moment the sailor, who wrote it in a letter, couldn’t get out of his mind. And, when I saw it, neither could I. Because that’s what it was to be an American in the 1980’s. We stood, again, for freedom. I know we always have, but in the past few years the world again — and in a way, we ourselves — rediscovered it.”

Words of wisdom we need now, more than ever. Freedom and everything it entails should be the hallmark and lodestar of how WE govern. Our elected officials are answerable to the citizens of this Republic, that is the brilliance of our Constitutional design.

"To live under the American Constitution is the greatest political privilege that was ever accorded to the human race."
—Calvin Coolidge pic.twitter.com/l9q5FcdqwU

Our knowledge of our American greatness is equally important. Some months ago, President Trump started the 1776 Project as a way of countering the 1619 project that was solely designed to decimate our history in favor of racial political correctness.

On Monday, the first 1776 report was published. I urge ALL our readers to read every word, especially now.

In 2020, we saw that resiliency put to the test, and Americans stepped up in ways large and small. Our distilleries rebooted and made hand sanitizer, vaccines were made at Operation Warp Speed, and Barstool Sports Founder Dave Portnoy is giving local restaurants grants to keep afloat. Families and individuals have provided food, clothing, and resources to those laid off, communities provided laptops for kids so they could conduct remote learning, the stories are too numerous to recount. We didn’t wait for the government. No, WE the People did what Americans do best. We stepped up.

Now more than ever, we are reminded of the power of Dr. Martin Luther King Jr.’s words, calling on all of us to have ‘the courage to face the uncertainties of the future,’ ‘as we continue our forward stride toward the city of freedom.’

We’ve got to do a better job of getting across that America is freedom — freedom of speech, freedom of religion, freedom of enterprise. And freedom is special and rare. It’s fragile; it needs production [protection].”

Hold on to those words. Our American story is unique and worth celebrating even in times such as these. While some do wonder if our Freedom has an expiration date, we should use that instead as a challenge to recommit to our Constitutional roots. As President Reagan reminded us, be an informed Patriot and teach those around us to be the same. Let us remember that we are always WE THE PEOPLE and our FREEDOM and Liberty are worth everything.

Feature Photo Credit: Royalty-free stock photo ID: 101947531 Preamble to the Constitution of the United States and American Flag by larry1235 via Shutterstock, cropped and modified