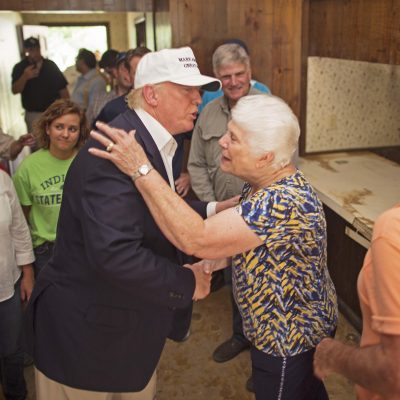 Donald Trump and Mike Pence have visited flood-ravaged Louisiana, causing President Obama to sit up and take notice, and Hillary Clinton to just plain wake up, as Nina wrote earlier today. The optics of a Republican presidential candidate outdoing a Democrat just won’t fly in an election year. So Obama will be interrupting his Martha’s Vineyard vacay to visit Louisiana on Tuesday. 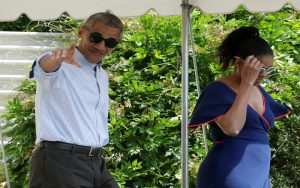 But prior to his visit, Obama and his Justice Department made sure to wag their fingers at the devastated residents, reminding them that any kind of racial discrimination among them would not be tolerated. A 16-page memo was thus issued to warn recipients of any kind of disaster assistance that yes, Big Obama and Big Justice were going to be watching them.

You can read a pdf of the entire memo here. But let me wet your whistle with these words from the second paragraph of the Big Warning:

In the aftermath of Hurricanes Katrina and Rita, we have learned many critical lessons about how recipients of federal financial assistance engaged in emergency management activities can more effectively ensure that all members of the community receive services, regardless of race, color, or national origin. Pursuant to Presidential Policy Directive 8, the Federal government issued the National Response Framework and the National Disaster Recovery Framework, guides on national response to all types of disasters and emergencies and effective recovery support to disaster-impacted areas. The Recovery Framework notes that “care must be taken to assure that actions, both intentional and unintentional, do not exclude groups of people based on race, color, national origin (including limited English proficiency), religion, sex or disability.” Both Frameworks highlight the importance of complying with the nondiscrimination requirements of civil rights statutes, addressing the needs of the whole community, and ensuring equal opportunity to access recovery efforts.

Louisiana residents are, in a word, pissed.

Still, it’s more than a little jarring to have spent time in a shelter watching people of all races working their asses off to help people of all races in their hour of great and overwhelming need, and to be seeing in our local media abundant evidence of the same thing, of people in our community pulling together, and … well, I’ll let my friend Jimmy speak for me:

“Not many things get me seething, but this does. The narrative of this Administration as dividers instead of uniters is real. Look no further than this “guidance” press release telling us in the middle of it to be sure not to be racist, y’all. Meanwhile, our President enjoys golfing and Martha’s Vineyard and sunny skies. No visits, not even that reviled Bush flyover. Just politically motivated, racially laced memos. Meanwhile, we’ll keep on keeping on. Thanks, Obama.”

Maybe if Mr. Obama would’ve looked up from his golf game, he would’ve noticed people of all ages and races pulling together to rescue one another, as seen in this video highlighting the “Cajun Navy,” which is sort of like a Dunkirk of the American South.

Look, black people! Being rescued in a boat with white people! Who knew?

And relaxing from all that rescuing in a makeshift swimming pool! Together! Blacks and whites!

Even animals were saved! Not even species discrimination in Louisiana. 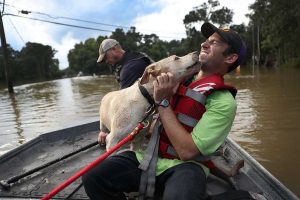 Some 30,000 people have been rescued — people of all ages, races, nationalities, creeds, etc., etc. — many by their friends and family, and others by complete strangers. They did so without the guidance of an insulting memo. They did so by following what Jesus described as the second great commandment — to “love your neighbor as yourself” (Matthew 23:39).

No offensive 16-page memo needed from the Divider-in-Chief.