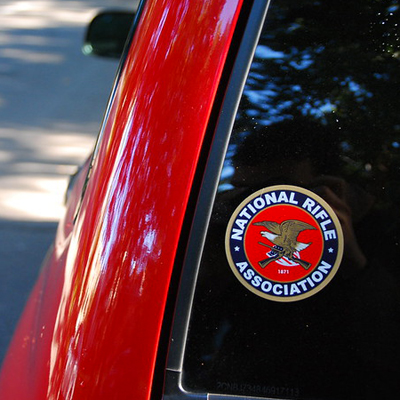 Anti-gun protesters, members of the media, and the Twitterverse wanted the National Rifle Association to cancel their convention in Houston. But the NRA began its meeting as scheduled on Friday.

Speakers and No-Shows at the NRA Convention

Several major speakers and entertainers pulled out of the convention. These included Rep. Dan Crenshaw (R) and Sen. John Cornyn (R). TX Gov. Greg Abbott, who is in Uvalde, addressed the group via video. Plus, Lt. Gov. Dan Patrick withdrew, “after prayerful consideration and discussion with NRA officials,” he said.

As for the entertainment side of the convention: singers Don McLean, Larry Gatlin, and even Lee “God Bless the USA” Greenwood decided against appearing. They made their decisions in light of the school massacre.

Sen. Ted Cruz, for example, called for his fellow Texans to care for the stricken parents in Uvalde.

"All of us in Texas need to come together and comfort those families right now. We need to love them, embrace them, and take care of them."

– @SenTedCruz on the unthinkable anguish of the families in Uvalde. #NRAconvention pic.twitter.com/phhFHDttOY

While NC Lt. Gov. Mark Robinson said that patriotic gun owners have the responsibility to be first responders.

"I am a law-abiding, armed, patriotic American. … In this nation, you are not the second responder, you are the FIRST responder."

“Restricting the fundamental human right of law-abiding Americans to defend themselves is not the answer. It never has been.”

“We need to protect our schools, because our children deserve at least, and in fact more protection than our banks, stadiums and government buildings … so that every school has a comprehensive security program tailored specifically to that school to meet its security needs.”

“Whatever our differences may be on other issues, what on earth is stopping Democrats from immediately passing measures to ramp up school security.”

Protesters and Social Media Rage at the NRA

Anti-gun protesters appeared outside the convention hall in Houston where NRA members were meeting. Not surprisingly, the always irritating man-child David Hogg showed up, revving up the crowd:

📣'Let me be clear: the enemy of this movement is gun violence,' Parkland survivor @davidhogg111 says at Houston protest outside of @NRA convention. pic.twitter.com/AzB57MgbFF

“Who else agrees the NRA should be held financially liable for mass shootings?”

Because the NRA conducts school shootings?? Sure, Jan.

And this pathetic attempt at humor:

As always, there was an abundance of class and sophistication among the anti-NRA protesters, too. 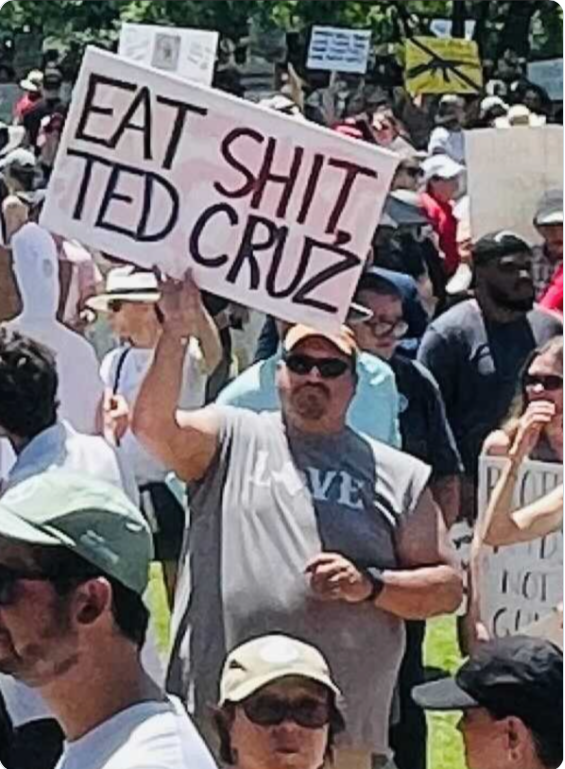 When you have no cogent argument, go for the ad hominem attack, right? Especially while wearing a t-shirt that reads “Love.”

The New York Times Piles On

The NRA convention sent the New York Times into hissy fits, too.

“What’s clear, however, is that the very people who shout most about “freedom” are doing their best to turn America into a “Hunger Games”-type dystopian nightmare, with checkpoints everywhere, loomed over by men with guns.”

Leave it to Krugman to supply the dramatics.

Another Shooting From Another Time

Shootings which have shocked us are not recent, however. My husband, in fact, was caught up in a shooting event in Wichita, KS, in 1976, when a sniper fired down upon citizens from atop a Holiday Inn in the downtown area.

He and a friend were driving back from lunch to their place of employment when they heard gunshots and frantic warnings on the radio. Their office, in fact, was just to the west of the Holiday Inn; fortunately, the shooter was firing to the south. But there was no way of knowing, so they parked near trash dumpsters and ran behind them until they reached their building.

Eleven people were shot, and three people died that day after a gunman fired upon them for no reason. In the Heartland, of all places.

But this was not the first mass shooting — indeed, far from it. Wikipedia lists a host of mass killings throughout the 20th century.

Certainly disturbed young men have always been with us. So what has changed?

What Has Brought Us Here?

On Friday, our Cameron wrote that “More Fathers, Not Fewer Guns Are a Better Solution.” She’s absolutely right, but I would add that the overall collapse of family and community are devastating our social order.

John Daniel Davidson, writing in The Federalist, notes that school shootings aren’t about gun laws, but family collapse. The Uvalde shooter personified all of it:

“A broken home, no father or father figure in his life, no church or community of any kind, no real friends except those he met through social media. Here we have, in brief sketch, not just a profile of a school shooter, but an indictment of our entire culture.”

Our culture has rejected God and religion at the urging of progressives and media. People who attend religious services and pray for others are portrayed as backwards, as well as those who believe unborn human life is precious. Our elites celebrate killing children in the womb.

Man has replaced God with himself. We no longer worship a Supreme Being, rather we’ve made ourselves supreme. Social media feeds this self-adoration; how many teenagers no longer view service to others as a worthy vocation? Instead, they long to become famous social media “influencers.” Even if it means shooting up a school.

And speaking of social media — how often do young adults eschew contact with families or friends, preferring to pour over posts on Instagram or Facebook? Add to that the forced isolation of Covid lockdowns, and no wonder we have a perfect storm brewing. Our kids are growing up in a culture of rot, yet our media can’t figure out why school shooters exist.

It’s All About Evil, Said Trump

During his speech at the NRA convention, Donald Trump referred to the “existence of evil in our world.” I often disagree with comments the former president makes, but I’m in full agreement with him here. Evil does exist in our nation, and our rotten culture is breeding more of it.