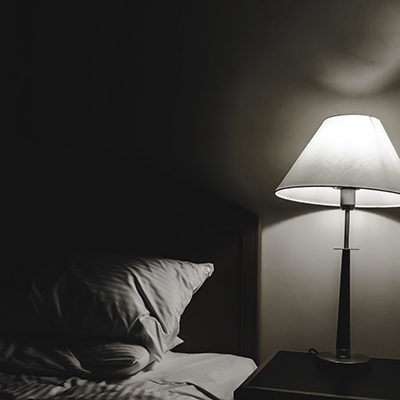 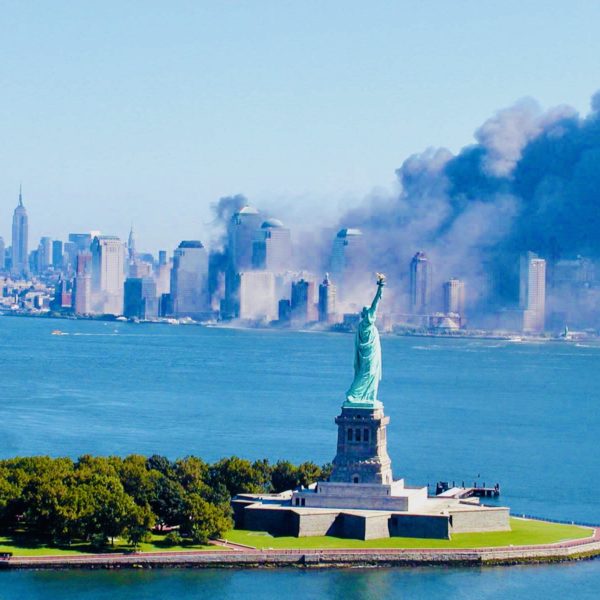 The NAACP decided to reclassify 9/11 as an “incident.” No, I’m not kidding. Below is the tweet they sent out.

Today we remember all the lives lost and families affected during the horrific incident that occurred in 2001. #NeverForget pic.twitter.com/63FVBl2qu8

This is SERIOUSLY the equivalent of Ilhan Omar’s “some people did something!” 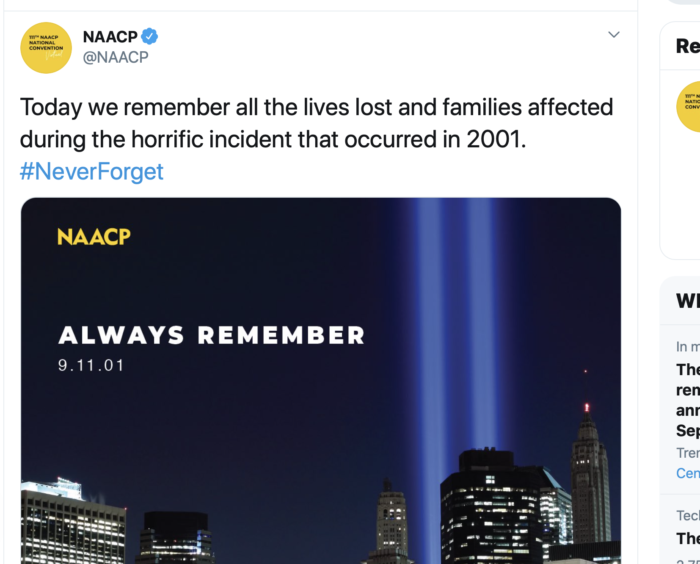 It’s unfathomable to me that we’d have to REMIND people that what happened on 9/11 was a full out attack on our country by Islamic terrorists. It was an attack against FREEDOM. Yet here we have the NAACP, a civil rights organization, classifying this day as an “incident.”

Rick Rescorla wasn’t just some people. If it wasn’t for him, the number of people killed would’ve been far greater. The Man in the Red Bandana, Welles Crowther, gave his life at age 24 while saving the lives of so many others.

Cops and firefighters ran INTO the towers, service men and women ran INTO the Pentagon. The passengers on Flight 93 attacked the terrorists so their plane wouldn’t be used to kill more Americans.

President Trump: "The heroes of Flight 93 are an everlasting reminder that no matter the danger, no matter the threat, no matter the odds, America will always rise up, stand tall, and fight back." pic.twitter.com/Sat4EWtAPh

For the children who lost their parents, this day will NEVER be just an “incident.”

“Matt Bocchi, who lost his father that day in 2001 when terrorists struck the World Trade Center, will never forget that day. His new book “Sway” is the first memoir told by a child of a 9/11 victim, and details the trauma he battled after he was told his father would never return home when he was 9 years old.”

Can you imagine NAACP? A bewildered 9 year old boy finding out that his father will never come home because of terrorists? Matt’s father worked at Cantor Fitzgerald in the North Tower. His office was above the area where the first plane hit. It took a WEEK for the Bocchi family to find out their husband and father had not survived.

Not only that, but Matt suffered additional trauma years later when he was sexually abused by one of his uncles. Yet you, NAACP, want to classify 9/11 as an “incident.” Matt doesn’t and never will consider 9/11 as a minor blip on the radar.

“Bocchi is keeping his father’s legacy alive by enjoying the little things like his father would want him to. But he fears 9/11 may one day become a tragedy that is forgotten, especially after cancellation of tributes to victims, such as the reading of the nearly 3,000 victims’ names by family members, amid the coronavirus pandemic.

“For them to cancel that stuff is a slap in the face,” Bocchi says. “They never talked to 9/11 families about cancelling. A lot of [9/11 families] looked at it as a hurtful action because you promised you’d never forget, but here we are, nearly 20 years later, on our way to forgetting.””

As Kate wrote, it has been 19 years and America isn’t the same. Yes. It is indeed our obligation, our burden, our responsibility to NEVER FORGET that day.

Instead we have the NAACP brushing that day off as if it was a fiery but mostly peaceful traffic accident. Sadly, the NAACP is in good company.

The Lincoln Project co-founder decided to declare that President Trump staying in office is equivalent to one of the Towers crashing down.

Meanwhile many in the media are now comparing those who died on 9/11 due to a pre-meditated terrorist attack to the number of those who have now died from Covid-19!!

CONSIDER THIS: The United States has lost 64 times more people to Covid-19 so far this year than we did in the 9/11 attacks. How will Americans mourn those losses, and how will it change our politics?

It wasn’t just Karen from ABC News. George Conway, Charlie Sykes, Paul Krugman and others had to politicize this day, and minimize the suffering and loss from that day in order to slam President Trump.

It is sad and yet illuminating that politics couldn’t be put aside to honor and remember those lost to a massive terrorist attack. For the NAACP to minimize and overtly diminish that day says a great deal about their organization’s character.

Dan Hill said it best when talking about Rick Rescorla.

“One of my life’s biggest regrets is that I couldn’t have been with Rick at the moment of his great challenge and crisis of his life. Then again, maybe it was so destined, because if I didn’t survive, there would be nobody left to tell the story.

Kipling wrote that “all men should count with you, but none too much.” I failed there. Rick counted as the world to me.

Two thousand nine hundred and ninety six families lost their world that day. To them that terrorist attack will never be just an “incident.”