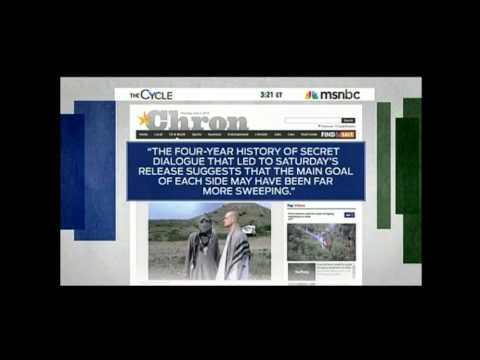 by Kate in Headlines 10 Comments

You know our War on Terror? Well, apparently we’ve been doing it all wrong. Do we want to end terrorism? Then we need to “talk” to terrorists; we need to “give them a job”; and really – most importantly – realize we can’t “kill our way out of this War on Terror”… Yes. All this wisdom from one of the members of the co-host brain trust at MSNBC, aka Touré Neblett, in the aftermath of the Bowe Bergdahl prisoner exchange.


Note to Mr. Neblett: Terrorists do not have time to go look for a job. They’re simply too busy terrorizing (see what I did there?) by kidnapping, maiming, and generally beheading innocents around the globe. Personally, I prefer the FOAD method, myself. Thanks, though.

Pure jackassery over there and the stupid hurts.

The Other McCain has many good blog posts up including this one by Stacy on “Terrorism and Euphemism.”

ST at Sister Toldjah has up this post on “Exhibit A from @Politico on how the media manufactures “outrage”.”

Professor Jacobson at Legal Insurrection has up this post today on “Voter ID law wins big in Mississippi primary, even though not on ballot.”

V the K at Gay Patriot has up this blog post called “Government Union Demands Luxury Offices for Bureaucrats.”

Glenn Reynolds, Instapundit, has many great posts at his blog hub from all over the blogosphere so go check them out! And you can read Glenn’s latest article in USA Today on “VA scandal exposes greedy socialism”, here.

Dana at The First Street Journal has up a great post called “Perhaps the left’s ideas about addressing income inequality might not be the better ones?”

As always, Michelle Obama’s Mirror has up a great post called “Moral Narcissism in a Week of Anniversaries.”

Jammie at Jammie Wearing Fools has up this post “How Bad Are Things For Obama? Even Mike Lupica Shreds Him Over Bergdahl.”

This Ain’t Hell has up a lot of great posts this weekend, but I especially like this post by Jonn called “Blue Falcon: I make too much money as a vet.”

Donald Douglas at American Power has up this blog post on “’Think Progress’ Blames #Berghahl Desertion on Army’s Failed Efforts to Treat ‘Combat Stress and PTSD'”.

Neo at Neo-Neocon is writing about “They were for Bergdahl before they were against him: those terrible GOP flip-floppers.”

Jeff at Protein Wisdom has this post up, “Pre-dry wall inspection today. Plus, societal upheaval at every level.”

Mr. Wolf at Blackfive has up this post, “About That Bergdahl Thing…

Ann Althouse has up a number of great posts, but I like this one – “Love is all around.”

Jazz Shaw at Hot Air has up this post up… “Another 1st grader suspended for a toy gun.”

and finally, Ace at AoSHQ has up this post on “Dianne Feinstein: I Have Never Seen Nor Heard Any Claims That the Taliban Told Obama Not To Inform Congress About The Bergdahl Swap.”