Next post
Cuomo Behind The Eight Ball With Eighth Accuser 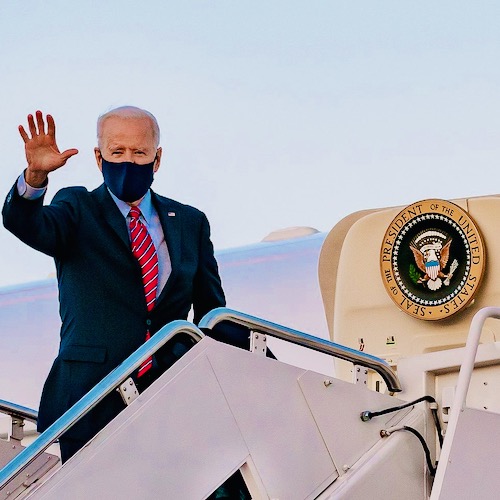 Biden did a triple trip up the stairs to Air Force One. It was painful and sad to watch.

Quite a number of people are appalled and horrified about what happened. I am also wondering why no one rushed up the stairs to help Biden? Quite honestly, as you watch both of the above videos, it is evident (at least to me) that Biden was less than half a step away from taking a serious tumble down the stairs.

Yes, I’ve fallen UP the stairs many times and have ended up barking my shins on some of those occasions. However, I’m not an eighty year old man who is dealing with some very concerning health issues and is recovering from a broken foot!

Many were wondering if the media would give this the triple trip the same treatment they gave to President Trump for walking down the steps slowly, or President Gerald Ford for tripping?

@ChrisCillizza, are we getting a 2,000 word story on Biden’s stumble? pic.twitter.com/zGtIPMD608

Ehhh, no. Instead we have them reassuring us that Biden is fine! He’s so fine, he’s 100% fine!

“President Joe Biden is doing “100% fine” after he tripped while walking up the stairs to board Air Force One earlier Friday, White House principal deputy press secretary Karine Jean-Pierre said.

Biden stumbled as he climbed the plane’s steps, initially appearing to trip, get up, then trip a second time. He struggled to get up the second time for a brief moment, before making it up, turning to wave at the top of the steps before hustling inside.”

Other media outlets are also being very reassuring. In other words, nothing to see here, move along! Let’s focus on Biden getting to Georgia so he can do a victory shuffle with the CDC. Let’s focus on Biden meeting with Asian American’s in order to reassure them that he’ll fix the violence problem.

Oh, ok. So he walked off the plane with no troubles at all. Except watch the video starting at about 1:10 in. Is Biden fine? It sure looks like he was having more than a little trouble figuring out which direction to go.

According to the White House deputy press secretary, there was a specific cause for Biden’s triple trip.

“It’s pretty windy outside, it’s very windy. I almost fell coming up the steps myself. He is doing 100% fine,” she said.”

WIND??!! I’ll admit, my jaw dropped at that one! You see, I grew up in the wind capitol of the West, Wyoming. Just this winter alone we’ve had 30+ days where the wind speed is 50 mph or greater. Several times, including during this latest blizzard, wind topped out at 90 mph for several hours. All that to say, it was NOT windy at Joint Base Andrews. It was, at best, a bare hint of a breeze happening.

"A light breeze knocked over the Commander in Chief" is not the spin of a strong nation. https://t.co/F2iVeMeou1

I agree. First of all, the WH is blatantly lying about the wind factor. Secondly, in light of China rolling all over us during the meetings yesterday, Biden’s triple trip up the stairs is a major concern for this country on multiple levels.

Using wind as an excuse makes the United States look weak when it comes to foreign policy. And right now, we absolutely CANNOT afford that.

Secondly, it goes again to the very real and valid concerns I and many others have regarding Biden’s health and well being. Biden’s stumbles during the campaign weren’t funny, they were very concerning. Yet now he is President. These fumbles and gaffes (such as addressing Kamala as President Harris just the other day) should have sirens blaring.

The media DEMANDED we be very concerned about President Trump’s health after the whole slow stair walking and holding a glass with two hands. Yet with Biden? Please ignore what you just saw and go on about your lives.

So yes, the media firefighters have swung into action to explain away Biden’s triple trip and “doctored videos.”

It’s sad for him/his family, detrimental to our country, & makes us a laughing stock to the world

Yes, we are weak, the world is laughing at us, and the Biden Family and Administration have much to answer for in what they are doing to Joe Biden.