Mayorkas: Resignation May Come To Fruition

Mayorkas: Resignation May Come To Fruition 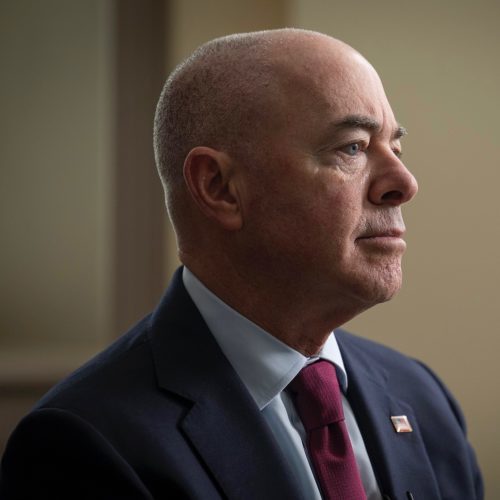 Alejandro Mayorkas, yet one more member of this incompetent administration was called out on the carpet last night. In fact, House Minority Leader Kevin McCarthy, called for the Homeland Security Secretary to resign or be impeached.

McCarthy promised to launch investigations into Mayorkas next year, and potentially impeach him over the handling of the crisis at the southern border.

We will use the power of the purse and the power of subpoena. Let me be clear, those responsible for this disaster will be held accountable.”-House Minority Leader, Kevin McCarthy

Wait a second….wasn’t Kamala Harris put in charge of this task? Oh, right. Biden put her in charge and then her team tried to distance her from the mess. Yeah, Kamala. YOU handle space exploration! (Cackle, cackle.)

Deaths at the southern border. About two million illegal crossings in 2021 alone, human trafficking and yet more death. Let’s not even talk about deadly drugs crossing the border, magnifying the opioid crisis and getting deadly fentanyl into the hands of children.

These were all just “challenges“, right, Alejandro?

No crisis then. No crisis a week ago. But boy-oh-boy, five days ago? Ladies and gentlemen, we have ourselves a crisis (just in case you did not know)!

We are seeing a significant challenge at the southern border, as we are seeing it throughout the hemisphere.”-Alejandro Mayorkas

BREAKING: Kevin McCarthy hints that if he becomes Speaker he will impeach Joe Biden's DHS Secretary Alejandro Mayorkas — Republicans hate Mayorkas because he refuses to brutalize migrants and separate families along the border. RT IF YOU SUPPORT KINDNESS TOWARDS MIGRANTS!

Kindness towards migrants? We see the Occupy Democrats are high once again on those opioids the cartel brought over the border. People are dying of heat and exhaustion while crammed inside of tractor trailers crossing the border. Some of these people are kids. No oversight at the border. I guess that’s cool because some family members were together in their death, right? This happened when Mayorkas said there was “no crisis” at the border. He had everything under control. Just like everything else in this administration. No train wreck to see here, folks. In fact, Mayorkas was quite proud of the job he, together with the Biden administration, was doing.

They also hate him because he’s a POC. They’re racist and bigoted people.

Oh, Lordy! No, people don’t hate Mayorkas because he is POC or an immigrant himself. They don’t hate the person, they hate the sin. The sin here? Utter incompetence.

Sophisticated transnational syndicates are notorious for using children to get single, adult males not just across the border, but through Border Patrol processing. Once these men are granted a stay, they smuggle the children back across the border where they will continue to be trafficked. Studies done by the Latin American branch of the Coalition Against Trafficking In Women estimates that 60% of Latin American children who set out to cross the border alone or with smugglers have been caught by the cartels and are being abused in child pornography or drug trafficking.

Under the Biden administration, human traffickers are busier than ever, expediting the flow of migrants across the southern border. The president has made it abundantly clear that his administration does not wish to stop illegal immigration, nor does it wish to enable necessary enforcement of the immigration laws that are on the books. It is factors such as these that drive large numbers of people to surge the border, overwhelming federal and local agencies and—most importantly—risking the lives of millions.”–Texaspolicy.com

The Occupy Demonrats can call us racist bigots all they want. But hell, no, we don’t criminals and perverts who abuse children crossing our borders. But, alas, thanks to Alejandro Mayorkas, they do so every day.

We know exactly what Secretary Mayorkas has done. We’ve watched across this nation, something that’s never happened before. We watched him time and again before committee say this border is secure, and we can’t find one border agent who agrees with him,” McCarthy said. “So we will investigate. If investigation leads to impeachment inquiry, we will follow through.”-House Minority Leader Kevin McCarthy

He’s done absolutely nothing. And, as a result, innocent people have suffered. We’ve gone from “kids in cages” to kids under the grip of addiction or death with rainbow fentanyl.

It is an honor to be nominated and entrusted by the President-elect to serve. It is no small task to lead the Department of Homeland Security, but I will work to restore faith in our institutions, and protect our security here at home.

My, oh, my, Mr. Mayorkas. That tweet certainly did not age well. Do we have any more faith in our institutions thanks to Alejandro Mayorkas? Do we feel safer at home? I think we all know the answers.