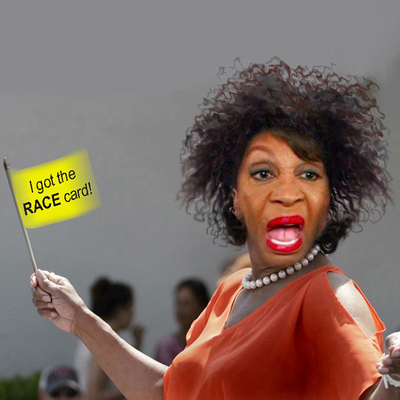 Full disclosure here: I’m not a fan of Rep. Marjorie Taylor Greene. However, I also believe that two things can be true at the same time. So while I don’t care for MTG’s former embrace of QAnon theories, I applaud what she’s trying to do to the execrable Rep. Maxine Waters.

She plans to introduce a resolution to expel the vicious Maxine from Congress for her “incitement of violence.” And I say, You go girl!

After all, if House Democrats could remove Marjorie Taylor Greene from committee assignments for embracing ideas that offended their tender feelings, then certainly MTG should be able to put the hurt on Maxine Waters for egging on riots in Minnesota. What goes around, comes around, kind of like karma.

And you know what they say about karma, don’t you?

Let’s briefly review what Waters said over the weekend, shall we?

Maxine Waters, from California, traveled to Minnesota to encourage “protesters” *wink wink* to “fight for justice” just in case the jury in the Derek Chauvin trial returns a verdict of less than guilty of murder. Chauvin has two murder charges against him: Second-Degree Unintentional Murder and Third Degree Murder. The remaining charge is Second Degree Manslaughter.

And Maxine won’t be happy unless Chauvin gets the murder rap.

Rep. Maxine Waters calls for rioters to "stay in the street" and "fight for justice" against police unless Chauvin is declared guilty for murder, not just manslaughter.

"We got to get more confrontational. We got to make sure they know we mean business." pic.twitter.com/YVdV8QHfUM

But Marjorie Taylor Greene isn’t the only Republican to finally put the kibosh on Mad Maxine and her Thunderdome antics. Sen. Ted Cruz, in fact, indicted not only Waters but the entire Democratic Party for tolerating her violent rhetoric. Cruz tweeted:

“Democrats actively encouraging riots & violence. They want to tear us apart. ‘We gotta stay on the street,’ Waters was recorded saying, adding that protesters needed ‘to get more confrontational’ & they should ignore the curfew in place.”

Plus, Rep. Andy Biggs tweeted that Waters is appeasing her leftwing base:

“The Radical Left don’t care if your towns are burning, if there’s violence in your streets, or if the police are too defunded to defend their communities. As long as the Left appeases their anti-America base, their job is done.”

“Maxine Waters is trying to create a Civil War, and her irresponsible rhetoric is inciting violence. House Speaker Nancy Pelosi should strip her of her committee assignments and move for a vote to remove Waters.”

However, Waters doesn’t see herself as someone who was trying to incite violence in Minneapolis. No, she was there as kindly dear “Aunty Maxine,” as she told an MSNBC host on Sunday morning.

But “Aunty Maxine” has a long history of inciting violence against her political opponents. Remember when she called for her followers to harass members of the Trump administration?

“If you see anybody from that Cabinet in a restaurant, in a department store, at a gasoline station, you get out and you create a crowd and you push back on them, and you tell them they’re not welcome anymore, anywhere.”

Or that time when she claimed Donald Trump was organizing to start a civil war?

.@RepMaxineWaters on DHS sending agents to Portland as riots continue: "As a matter of fact, it has been suggested that this is a trial run by the president of the United States who may be organizing to not accept what happens when we have the election if he’s not elected." pic.twitter.com/54a2DHDx7l

Yet the Left thinks that Marjorie Taylor Greene is the kook. Go figure.

It doesn’t take a crystal ball to predict that Minneapolis will burn if Derek Chauvin walks next week. Or even if he gets convicted of manslaughter. In fact, it wouldn’t surprise me if we see Minneapolis burn even if the jury finds him guilty of murder with the prospect of spending time in the slammer. Either way, it sucks to be a Minneapolis resident right now.

And part of that is due to the inflammatory rhetoric of Maxine Waters. Marjorie Taylor Greene is on the right track here in calling for Waters’s impeachment. Unfortunately, it probably won’t happen. But it should: Aunty Maxine, at 82, should be sent packing to her $6 million home which, by the way, isn’t even in her own district. Apparently the hellhole 43rd Congressional district in Los Angeles is too dangerous for her to live in.