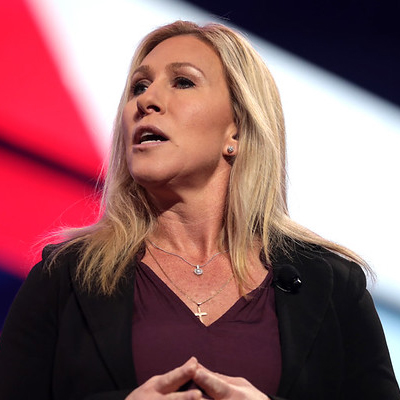 Love her or hate her, Rep. Marjorie Taylor Greene is a Congressional lightening rod. Because of that, liberals are trying to keep her off the ballot in a Georgia Republican primary next month.

A group calling themselves “Free Speech for People” insist that Greene (or “MTG” if you prefer) tried to cause an insurrection on January 6 at the Capitol. Therefore, she violated her oath of office, and should be disqualified from running for Congress — probably ever again:

“This is a serious case that the voters who we represent have brought in order to offer proof that their United States representative seeking re-election, Marjorie Taylor Greene, having taken the oath to support the Constitution, then broke that oath and engaged in insurrection.”

Okay. So what constitutional law did she violate?

It’s a little-known section of the 14th Amendment which came from the Reconstruction era and kept former Confederates from ever running for state or federal office. It reads, in part:

“… no person shall” hold “any office, civil or military, under the United States, or under any state, who, having previously taken an oath” to “support the Constitution,” had then “engaged in insurrection or rebellion against the same, or given aid or comfort to the enemies thereof.”

So was Marjorie Taylor Greene breaking into the Capitol during the riot? No, she wasn’t. In fact, MTG was hiding in the hallways after rioters broke down the doors.

But, but … she said “1776” in an interview with Newsmax, saying that challenging the 2020 election was “our 1776 moment.” Apparently that’s code word for insurrection or something. Even though she also pointed out that 1776 is on the state seal of Georgia.

MTG also found that time when Nancy Pelosi used “1776” in her call to impeach Donald Trump. Does that make Pelosi an insurrectionist, too? Maybe she used it as a code word to launch the BLM riots in 2020. Gasp!

According to the left, 1776 is a code word for insurrection.

Did @SpeakerPelosi use 1776 as a code word to the radical left’s domestic terrorists Antifa/BLM to launch insurrection in the city streets of America in 2020?

According to the left, she did.

Pelosi no more intended to start those riots by using “1776” any more than MTG used that term to start the riots on January 6.

On Friday, Marjorie Taylor Greene appeared before a court in Atlanta, GA, during which she acted “hostile,” according to the Associated Press.

Well, wouldn’t you be hostile if you had to listen to this codswallop for hours on end? Where Ron Fein, the attorney for the ironically named “Free Speech for People,” called your use of “1776” a dog whistle for insurrectionists? And then made you watch a clip of the movie Independence Day to prove you stole a line from that film? Supposedly MTG used Bill Pullman’s line that humanity “will not go quietly into the night” to spur insurrection.

“Well, that’s something that you borrowed, from a movie script, right? You borrowed that line from the movie Independence Day, right?”

“Well, let’s go to the tape. This is the one about the aliens come to the world, and then there’s a big battle on July Fourth to ward them off. And there’s a scene in that movie where the president addresses the fighter pilots who are about to go into battle. Do you remember that?”

“I don’t remember, but you’re going to show us.”

And show the court he did. In the words of Bugs Bunny, What a maroon!

Is Marjorie Taylor Greene a bomb-thrower in Congress? Absolutely. But do these examples prove that she tried to foment an overturn of the government on January 6? Absolutely not. This stuff is just plain silly.

The Fate of Marjorie Taylor Greene

I have an idea: how about let’s forget this clown show and let the people of Marjorie Taylor Greene’s district decide if they want her back?

In her Georgia District 14, MTG is facing a primary challenger who is nipping at her heels. According to the Federal Election Commission, Jennifer Strahan, a healthcare advisory firm executive with no political experience, has raked in lots of Republican cash. Does Strahan have enough to unseat MTG? Well, maybe, maybe not. After all, Greene has raised over $8 million, more than any other incumbent in the Peach State. Apparently lots of her constituents really like Marjorie Taylor Greene.

Dan Abrams, an attorney who hosts a program on NewsNation, is no conservative. But while he’s no fan of MTG, Abrams agrees that it’s up to the voters to decide her fate. Plus, he adds, using that Reconstruction-era reasoning is quite the stretch, too.

“MTG is a firebrand. She’s a bomb thrower, and every now and then, she does post something that’s a tad extreme. That’s not illegal. That’s not disqualifying. There are these things called elections. If you don’t like her, vote her out. That’s the logical route here, not a lawsuit.”

Frankly, if I lived in Georgia’s 14th district, I’d vote for MTG’s challenger. I don’t particularly like Greene’s shenanigans. She reminds me a bit too much of some of the lightweights I saw during the Tea Party years who were — well, let’s just say, “not ready for prime time.” And it takes more than just “owning the libs” to be an effective legislator.

But it’s not up to me, nor to any Democrats who are frantically digging up dirt to keep her out of Congress. Let the people of her district vote to keep her, or to vote her out.