Next post
Obama Says World Should Care About "Grievances" of Terrorists

Wednesday morning, while preparing to rush out the door for work, I happened to hear part of an exchange on Fox News between liberal Alan Colmes and Republican strategist Brad Blakeman. They were discussing the Marie Harf gaffe, with Colmes trying to buttress Harf’s contention that going after the ‘root causes’ of poverty could curtail the rapid growth of ISIS, especially among young adults. 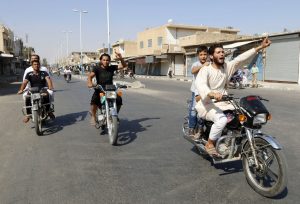 It dawned on me: Colmes, Harf, et. al., are naïve and mistaken to think that jobs and prosperity could help solve the terror problem. Adding to that belief, Barack Obama, in a Wednesday editorial, wrote that “economic, educational, and entrepreneurial development” can help address “legitimate grievances” (which he did not enumerate). This liberal, secular worldview leaves them unable to understand that of the devoutly religious, as they are convinced that the material blessings of the here and now can supersede spiritual blessings. They no doubt view religious practice as some sort of social exercise in which some people engage on weekends — Friday for Muslims, the Sabbath for Jews, and Sunday for Christians. The rest of the week belongs to the material world.

Only it doesn’t for the religiously observant. My Christian beliefs govern my daily life and activities. They are not something in which I engage in church only on Sunday, they are the deepest part of my identity. I would no sooner trade my faith for the riches of Bill Gates than I would trade any member of my family.

The Christian faith, which rejects theocracy, is well-suited for the Western world, but the Islamic State is not, and the secular idea of jobs and prosperity is anathema to those who embrace its harsh jihad and sharia laws.

Writer Graeme Wood, writing in a comprehensive and superb article in The Atlantic on the rise of ISIS, says:

They refer derisively to “moderns.” In conversation, they insist that they will not—cannot—waver from governing precepts that were embedded in Islam by the Prophet Muhammad and his earliest followers. They often speak in codes and allusions that sound odd or old-fashioned to non-Muslims, but refer to specific traditions and texts of early Islam.

Hence, perhaps, the incredulity and denial with which Westerners have greeted news of the theology and practices of the Islamic State. Many refuse to believe that this group is as devout as it claims to be, or as backward-looking or apocalyptic as its actions and statements suggest.

There were two shocking polls which emerged last summer and fall which found that the Islamic State had less support among Arab nations than among European nations. Just 3% of Egyptians, 5% of Saudis, and less than 1% of Lebanese supported ISIS, while 7% of Brits and a whopping 27% of French adults aged 18-24 viewed ISIS favorably. ISIS and its sharia code does offer free housing, food, and clothing; however, European countries offer lots of social services and consumer goods as well. The Islamic State, however, has enticed young Muslims to leave their comfortable European lives. Why?

There is a poverty among European youth, and it doesn’t consist of a dearth of jobs or opportunity. It’s a poverty of the soul.

Because, for all the awesome social services and consumer goods it can offer, Europe has become incapable of endowing the lives of its citizens, Muslim or not, with meaning. A generation of young European Muslims are giving up their relatively easy lives in Malmö, Marseilles, and Manchester for the battlefields of Syria and Iraq, because Europe is devoid of values worth living—or dying—for.

Furthermore, ISIS doesn’t only need killers. Its rapid growth requires cooks and mechanics, IT professionals, and bureaucrats, just like any military operation. In short, it represents a purpose-driven adventure to disaffected Muslim youth, especially those from Europe. There’s the ‘job opportunities,’ Miss Harf.

This is what liberals like Marie Harf, Barack Obama, and the rest of his administration fail to understand. They view the world through a secular prism, their zeitgeist promoting material values rather than spiritual. They do not recognize evil as a force. They believe that problems can be fixed by the application of temporal goods.

This is not to say that a non-religious person will always lack depth of life or purpose. I think of the courageous Ayaan Hirsi Ali, the former Muslim-turned-atheist who battles honor violence against women and girls. But when a nation or a people squander their spiritual heritage for empty materialism, a vacuum emerges in their culture, and a vacuum will always be filled. And what fills that void just might threaten our Western world.