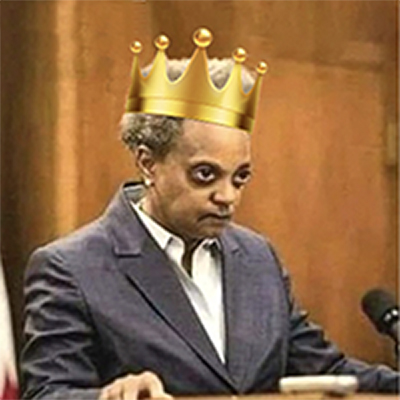 Lightfoot is running for re-election of the crime-ridden Second City, but her campaign is floundering. So her campaign deputy, Megan Crane, sent an email to Chicago Public School teachers asking them to encourage their students to help Lightfoot win re-election. She also sent the emails to teachers’ official work accounts.

The letter read, in part:

Crane also wrote that students would be able to earn class credit, too:

“Externs are expected to devote 12hrs/wk to the campaign. Students are eligible to earn class credit through our volunteer program.”

Forget the fact that the test scores of Chicago Public School students are some of the worst in Illinois. And that the scores haven’t returned to pre-pandemic levels, which were low to begin with. But priorities! Gotta get Lori re-elected!

This is unethical on so many levels. Promising rewards for students, using official work email accounts to send the solicitations — this stunt really stinks. 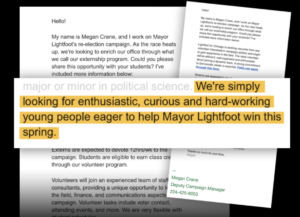 Deeply troubling news out of the Lightfoot campaign. It is completely unethical to pressure teachers and students to get involved in political campaigns. We shouldn’t be surprised. I am calling for a joint investigation by the City and CPS Inspector Generals. https://t.co/xPBExNSHC0

The Mayor should be more concerned about fully funding Chicago Public Schools than using them as a recruiting pipeline of free labor for her re-election campaign. This is deeply problematic. https://t.co/UIECLmirwb

Then again, Chuy has his own ethical problems; he has ties to crypto fraudster Sam Bankman-Fried and FTX. It appears that FTX made large donations to his campaign. Oops.

Plus, the Chicago Teachers Union — which are themselves hardly paragons of integrity — responded with their own letter to members. Claiming that Lightfoot was trying to “shake down CTU members,” the union wrote:

“This is the same Mayor who promised to clean up corruption and make good ethics an anchor in her administration. This latest scheme shows she’s a rank hypocrite on ethics issues — including her attempt to use our schools and students as her campaign tools.”

Shortly after the story hit Chicago media, Lori Lightfoot backed down, promising to stop soliciting CPS students for campaign work. Even if it meant extra credit.

Lori Lightfoot Lies About Crime, Too

Chicagoans have three big issues on their minds as they go to the polls on February 28 to vote for mayor:

But Mayor Lori Lightfoot says she has things under control.

Chicago police are reporting that major crime was up a whopping 41% last year. Not only that, but police staffing is down 12% since she became mayor in 2019.

Yet she wants voters to believe that she’s got it all under control.

Lightfoot tweeted on January 3 that “We’re seeing steady improvements in public safety efforts.” Two days later, she tweeted: “Much more to do, but we are on the right path.”

She capped those assertions off with a tweet on Tuesday, which included a new campaign ad.

When it comes to addressing crime in our city, I’ve got a plan — and it’s working. I won’t quit until we’re the safest big city in America. pic.twitter.com/SKQBlDw1iI

Her plan is working? C’mon mayor, don’t piss on our feet and tell us it’s raining.

In fact, CWB Chicago, the website which reports on crime which the Chicago Tribune and Chicago Sun-Times tend to ignore, notes that 21 of 22 police districts have lost cops during her tenure. Plus, major crimes have gone up in all 22 districts since she’s been in office. The overall police force in the city of Chicago has gone from 13,000+ when Lori Lightfoot took office to 11,731 as of this writing.

As for those “more police on the street” as the anonymous guy in the ad claims: that’s the number of police who protect Lightfoot’s home street. The “Detached Services Unit,” which provides mayoral security, has gone from 56 officers to 155.

“Otherwise, in districts from one end of the city to the other tell the same tale: Under the Lightfoot administration, the number of cops is down, and the amount of crime is up.”

Lori Lightfoot is so desperate to win re-election that she didn’t mind violating ethics laws so she could get school kids to shill for her campaign. Nor does she recoil from lying about crime in the city.

A great city is dying, and its shameless mayor will use any means to maintain her power.