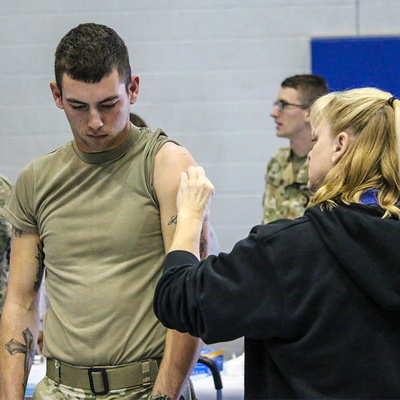 by Kim Hirsch in military 11 Comments

Defense Secretary Lloyd Austin will be making the Covid vaccine mandatory for active duty military, according to reports. That means that he will be asking President Biden for a waiver, since the Food and Drug Administration hasn’t yet approved the shots.

At first the Pentagon was waiting for FDA approval before making making the vaccines mandatory; however, that hasn’t happened. But on July 29, Biden said he would ask the Defense Department “how and when” the shot would be required. After Biden’s comments, the Joint Chiefs met to discuss a vaccine plan.

Then, while traveling in the Philippines last week, Lloyd Austin said:

“The President directed us to do something and we’ll get after it.”

Last week Biden also directed that federal employees give proof of vaccination or face regular testing or masking. So apparently Austin decided that this would be a good time to make his move.

The military already has a pretty solid vaccination rate, according to this video from early July. Of the four main branches, the Navy has the biggest percentage of vaccinated personnel, with the Marines bringing up the rear.

Of course some in Congress won’t be happy about Lloyd Austin making this step toward mandatory vaccines. Like Rep. Thomas Massie (R-KY), as seen in the video.

Last month, when rumors started to swirl about the shots, Massie tweeted that military members told him they would quit if they had to take the shots. So he sponsored a law to prohibit the requirement.

I’ve been contacted by members of our voluntary military who say they will quit if the COVID vaccine is mandated.

I introduced HR 3860 to prohibit any mandatory requirement that a member of the Armed Forces receive a vaccination against COVID-19.

It now has 24 sponsors. https://t.co/lbqYESmBYy

Except that’s not how it works. You just can’t give the military your two weeks notice.

But Denver Riggleman (R-VA), who retired from Congress in 2020, schooled Massie on that point. And Riggleman knows a thing or two, since he served in Air Force Intelligence.

They can’t just quit. That’s the whole oath to the constitution, service contracts and all that.

And as for Massie’s bill, HR 3860, as of this writing it has 29 cosponsors. It also has a 1% chance of being enacted into law, so good luck with that.

But back to Austin’s push to make Covid vaccines mandatory. . .

I view Lloyd Austin with some suspicion, since he seems more focused on racial diversity than military readiness. However, I agree with him on Covid vaccines being mandatory for military personnel, and here’s why:

Currently “R” is on shore duty on the East Coast, but in 2020, when Covid hit, he was on sea duty as the executive officer of one of the crews on a guided missile submarine. In March, when it was time to switch crews, the oncoming crew had an enlisted man who developed Covid. Of course the virus spread among other members, and the sub was not able to deploy. So R and his captain quickly had to contact certain members of the previous crew and order them back on the boat. They had to work fast.

R later told me that if too many people are sick, and boats and ships can’t deploy, that risks our national security. Now, extend that out to soldiers, or pilots, or the personnel who maintain the fighters and bombers, and on and on — and you can see how illness can quickly become a dangerous situation. As a civilian, I had never considered that before.

Those of us who cherish liberty condemn a government that seeks to force the Covid vaccine on American citizens. We find it abhorrent that Mayor Bill de Blasio is forcing vaccine “passports” on New York City residents, and worry that they’ll come to our towns too. Fear of a disease is making it too easy for government to take our rights.

So it makes sense that many Americans might also rail against making our military take the Covid vaccine. But it’s not the same. After all, when they took the oath of office, our military personnel also agreed to give up many of their liberties to protect ours.