Previous post
Impeach Or Resign: Neither Will Magically Solve The Problems We Face 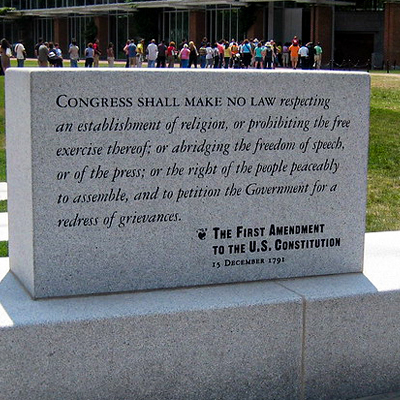 by Kim Hirsch in media 9 Comments

Attorney Lin Wood became a hero to conservatives when he took on Nick Sandmann’s defamation suit, and won. They cheered to see Big Media getting its comeuppance after it nearly canceled the young teen’s future.

But then the Georgia Senate runoffs happened, and Lin Wood advised Georgians to refrain from voting for the Republicans. And conservatives scratched their heads and went Whaaat?

It didn’t make sense that the strong Trump supporter would advocate for allowing GOP Sens. David Perdue and Kelly Loeffler to lose. That was just the start of Lin Wood going cray-cray, however.

On January 4, two days prior to the January 6 Electoral College challenge, Wood set off a volley of unhinged tweets. Not only did he accuse VP Mike Pence of being a “traitor,” he also pulled Chief Justice John Roberts, child rape and murder, and something called the Lizard Squad into a lengthy thread.

Here are just a few of the choice tweets:

“Mike Pence @vp @mike_pence is disloyal to @realDonaldTrump. Mike is also a traitor to We The People.

Mike is a good friend to CCP. Too good.”

“I believe Chief Justice John Roberts & a multitude of powerful individuals worldwide are being blackmailed in a horrendous scheme involving rape & murder of children captured on videotape.

I have the key to the files containing the videos. I have also shared this information.

“This blackmail scheme is conducted by members of 10 of world’s most well-known & “elite” intelligence agencies.”

“One of those groups was hacked by a group known as Lizard Squad. The blackmail files of rape & murder were obtained by this group & copy was provided to Isaac Kappy. — Lin Wood (@LLinWood) January 4, 2021”

But if you want to search out the entire thread at Twitter, you won’t find it. That’s because it kicked Lin Wood off its platform. However, you can read it at Legal Insurrection, the excellent conservative website run by William A. Jacobson, Professor of Law at Cornell Law School. Prepare to raise your eyebrows throughout.

I believe I captured a screenshot of Lin Wood’s final tweet, because within a few minutes poof! his account had vanished. 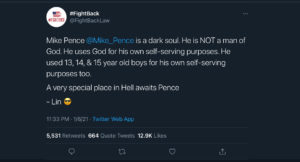 Lin Wood has also made his way to Parler, as have many conservatives. Right away he began ranting about Mike Pence and conspiracies to execute President Trump:

“Good afternoon! I am hearing rumors that Pence and leaders of coup are planning to arrest & execute President Trump and his followers.

He also threatened Pence with execution:

So guess what Parler did? They removed this comment.

Hold on — Parler is the free speech platform, right? So why did they remove this ‘parley’?

Because it does have its rules, and one of them is that members don’t encourage violence. Rule 6.1.2 states:

Plus it is against the law to threaten public officials — little thing like that, you know. So yes, Parler correctly removed this comment.

Parler CEO John Matze has also confirmed that the platform did remove some of Lin Wood’s more incendiary parleys. Wood, however, claimed ignorance and called his comments “hyperbole:”

“If such action occurred, I received no notification of it. My post about Pence was rhetorical hyperbole conveying my opinion that his actions on the Electoral College vote were treasonous to We The People.”

However, my search of Parler shows that Wood took down his @linwood page at Parler and replaced it with @theLinWood. It appears that he has quite the fan base there, too.

Which, if we’re going to be consistent about free speech, we should support.

Lin Wood, in my opinion, is an unhinged kook who dabbles in conspiracy theories and wild claims. His extraordinary accusations require extraordinary evidence — of which he has provided none.

But he should be allowed to run his mouth on social media, since the First Amendment guarantees freedom of expression. Moreover, the more he rants, the more reasonable people can see how demented he is.

Even his young client, Nick Sandmann, realized that Wood went off the deep end:

I’m sorry but what the hell https://t.co/oDBEmA8pwX

Lin Wood has cooked his own goose, and destroyed his credibility all by himself. He doesn’t need social media to shut him down and turn him into a QAnon martyr. Let him rant.