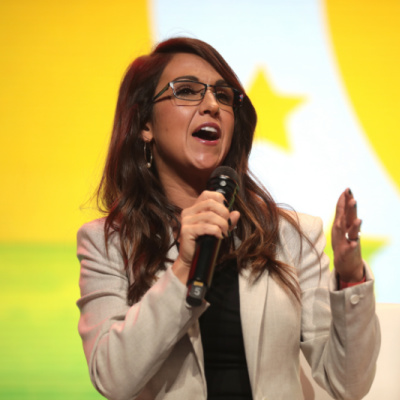 by Toni Williams in politics 3 Comments
Congresswoman Lauren Boebert (R-CO) has apologized to Ilhan Omar (D-MN) and the Muslim community for jokes she made about being in an elevator with Omar and the Jihad Squad. The Democrats are calling for more action against Boebert. The Republicans should just say no. Lauren Boebert is a pine cone up the backside of the elite managerial class in Washington, D.C.. She’s a high school dropout, who didn’t get her GED until right before her Congressional run. She owns a bar and she ran on carrying her Glock in Congress. The elites would say, “She is NOKD”. NOKD is something I heard a lot during my time in Connecticut. It stands for “Not Our Kind, Dear.” Just like Marjorie Taylor Greene (R-GA), Boebert is a take no prisoners, politically incorrect, straight-shooting woman. They drive the left crazy. When Paul Gosar (R-AZ) was censured and stripped of his committee assignments over a video supporting the Border Patrol, Lauren Boebert passionately defended him. She called out the Jihad Squad and Eric “Fang Fang” Swalwell.

“Brother husband.” You go girl. Back in her home district for Thanksgiving, Boebert did a stand-up style routine for some of her constituents, that I thought was pretty good.

Over the Thanksgiving break, Lauren Boebert said she was recently in a Capitol elevator with Ilhan Omar when a fretful Capitol police officer ran up.

Lauren Boebert said: “Well, she doesn’t have a backpack. We should be fine.”

Now, I didn’t take the story as true. It looked to me like Mrs. Boebert was just entertaining “some people” at a VFW Hall. Ilhan Omar was furious. Immediately, she called for censure and played the Muslim card:

Boebert, a Republican who represents Colorado’s 3rd congressional district, is also facing calls to be censured after a video was shared to Twitter of her relating a story about Omar and a Capitol police officer that concluded with a joke about a bomb in a backpack. Omar, a Democrat who represents Minnesota’s 5th district, responded to the video on Twitter and said “this whole story is made up.” She added that it was sad that Boebert “thinks bigotry gets her clout.”

Some social media users responded with outrage and called for Boebert to be censured by the House of Representatives. Mehdi Hassan, host of The Mehdi Hassan Show on MSNBC, was among those suggesting the Republican face censure. “This is disgusting,” Hassan tweeted, sharing the video of Boebert’s remarks. “How is this ok? How is this not worthy of censure? Of being stripped of committee assignments? I don’t expect anything from the GOP anymore but, hey, Dems? Anyone going to do anything about this racism and anti-Muslim bigotry? Do Muslim Americans not matter?” Hassan wrote.

Cry me a river. Some people did something, right? Let’s remember: Some people did NOT do something. Muslim terrorists killed nearly 3,000 people, not to mention those who have died since of diseases sparked by cleaning up Ground Zero. CAIR was not founded after September 11, 2001. CAIR was founded in 1994. And, Muslims were not losing their access to their civil rights. If I recall correctly, Americans walked on eggshells not to blame the Muslim faith. Ilhan Omar cannot hide her anti-Semitism. Even as recently as June of this year, she was spouting her ugly:

A US congresswoman has hit back after a rare rebuke from Democratic colleagues over her remarks seeming to liken the US and Israel to Hamas and the Taliban. A dozen Jewish lawmakers called on Ilhan Omar to “clarify her words”, but the Minnesota representative slammed the group’s “tropes”. This is not the first time that Ms Omar’s criticism of Israel put her at odds with members of her own party. In 2019, she apologised for implying money was behind support for Israel. On Monday, Ms Omar tweeted that “we have seen unthinkable atrocities committed by the US, Hamas, Israel, Afghanistan, and the Taliban”. “We must have the same level of accountability and justice for all victims of crimes against humanity,” she wrote, including a video of her questioning Secretary of State Antony Blinken during a committee hearing in the House of Representatives.

Quite frankly, I would like to see Ilhan Omar’s citizenship explored. Did she marry her brother? Did she commit any identify theft. She is untouchable because of her race and faith. Ilhan Omar kept her yap shut, too, when Maxine Waters called for violence against members of the Trump Administration. Bunch of hypocrites. They never apologize. They never back down. Lauren Boebert apologized:

Ms. Boebert issued an apology on Friday and said she had reached out to Ms. Omar to speak with her directly. “I apologize to anyone in the Muslim community I offended with my comment about Rep. Omar,” she tweeted. “There are plenty of policy differences to focus on without this unnecessary distraction.”

Too bad, Mrs. Boebert apologized. If you ignore the Jihad Squad, they will go away when the next shiny thing catches their attention. Marjorie Taylor Greene is standing with Lauren Boebert:

“Democrats want us censored, shut down, and imprisoned. Never apologize to Islamic terrorist sympathizers, communists, or those who fund murder with our tax dollars,” the far-right congresswoman wrote on Twitter.

Hale yeah. That’s how you hand these anti-Semitic, hateful, beastly women. Teach her how to do it, Marjorie. We need more bad-ass Republican women in the House. Featured Image: Gage Skidmore/Flickr.com/cropped/Creative Commons Attribution-ShareAlike 2.0 Generic (CC BY-SA 2.0)