Next post
NFL Will "Inspire Change" By Supporting Criminals 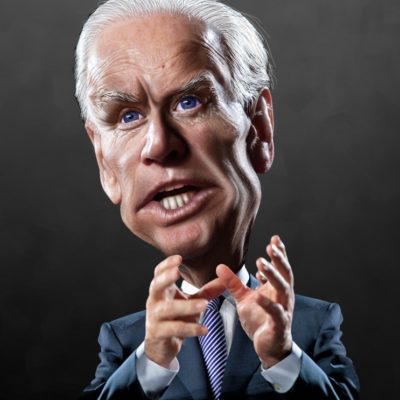 Joe’s visit to Kenosha shows how Democrats are willing to ignore their own “priorities” in order to beat Trump. Biden is scheduled to meet with Jacob Blake Sr., father of BLM’s exalted Jacob Blake Jr. Any further discussion of #metoo, #BelieveWomen et al should be banished from the party platform. Because Biden demonstrates that in the hierarchy of pandering, victims of sexual assault are low on his list. #meWho?

Democrats weaponize sexual assault, but only for party gain

Remember Trump’s hot-mic moment, when “grab them by the pussy” spawned mass hysteria in Democrat circles? The world would literally stop if there was a “pu$$y grabber” in the White House. (Well, a Republican one anyway). Fast forward to Brett Kavanaugh’s excoriation by Dems based on the completely insane ramblings of a woman who had zero credibility in her claims.

These, amongst so many others, are examples of Democrats “concern” for victims of sexual assault. A show of deep and abiding support extended to women who claim to have been assaulted by either Republicans or non-Democrat White men…. Until political expediency demands forgetting one victim in favor of a “more equal” victim.

Proof? Well, today Kenosha Joe is meeting with the father of accused sexual assaulter Jacob Blake Jr.. Jacob Blake Jr. happened to be shot by police after the sexual assault victim called them to her house, the scene of the alleged sex crime. In the mind of modern day Democrats, being shot while Black by police automatically overrides any and all prior bad acts. Even if those bad acts involve an alleged sex crime against a Black woman.

Democrats malleable stance on sexual assault is what allows them to overlook the fact that both Biden and Blake Jr are accused of forcing women to suffer through invasive and unwanted groping inside their vaginas. Slightly delusional that saying, “grab them by the pussy” gets more of a reaction than actually grabbing and penetrating them in the pu$$y. I guess running for President against Trump is as good as being shot by police while fleeing the scene of the alleged crime. Tally up the score, and that’s two women that Democrats are willing to put aside in hopes of winning an election.

And so, it’s here in Kenosha, Wisconsin, where we find Joe Biden planning a sit down with the father of a man accused of sexual assault. No mention of the victim of the alleged sexual assault. As someone who takes pride in having authored the “Violence Against Women Act” and the “1 is 2 many” initiative to combat sexual assault, he’s certainly embracing the current trend of “do as I say, and not as I do” practiced by so many in his party. Were he actually practicing the legislation he’s so proud of…

No one should have to live in fear of violence, especially in her home, and VAWA affirms that belief. Today’s signing ensures that victims and survivors can continue to be provided the vital resources they deserve. Our country is better off for it.”

If he was truly supportive of victims of sexual assault, he wouldn’t ignore a woman who is literally the truest victim in this event. She didn’t ask to be sexually assaulted. She didn’t ask to be afraid. She didn’t ask her alleged attacker to return to her house. She did ask the police to come and arrest him when he arrived at her home. What happened next was out of her hands, but I feel certain that she didn’t ask for her attacker to be held up as a hero because he was shot while fleeing from police. Every helmet, every jersey, every riot in his name minimizes what he did to her. Biden’s visit with the father of her alleged attacker renders her experience insignificant in the eyes of the public. Joe is rendering her existence as insignificant. Shame on you Joe Biden!

But please, by all means visit the father of the man who did this, The New York Post,

Blake, 29, was forbidden from going to the Kenosha home of his alleged victim from the May 3 incident, and police were dispatched Sunday following a 911 call saying he was there. The responding officers were aware he had an open warrant for felony sexual assault,”

If the optics couldn’t get any worse, Joe’s team failed him hard in setting up this meeting. Their rush to get him in the forefront and “do it better than Trump” has given a platform to a man who has a very comfortable relationship with anti-Semitic ramblings on social media.

Some FB posts by Jacob Blake, the guy @JoeBiden is planning to meet with.

If the investigation finds that his son’s shooting was unjustified those responsible should be held accountable, but there is no excuse for Biden to meet with a Jew hater. pic.twitter.com/5aoRZuftqc

That Biden and his team can see these public posts and yet still seek to meet with this man is very concerning. First because nobody should be comfortable meeting with racists. And make no mistake, Jacob Blake Sr. is coming off like a racist. Second, Biden and his team don’t think the American people will have a problem with this meeting. He thinks that the overriding dislike for Trump will be enough to excuse this abhorrent behavior.

And he’s correct. Democrats have already proven that the soul of their party is on the auction block if it means beating Trump in November. They dismissed allegations against Biden for sexual assault. They ignore allegations of sexual assault against Blake Jr, and idolize him as the face of aggressive policing. To the point that it renders a woman’s complaint insignificant, and compounds her experience while she watches her town burn in his honor.

Not even on social media can she be heard. Her Aunt was a vocal advocate for justice via Twitter. Before they suspended her account. Image via search using her Twitter name (soph@lifeisasoph) and internet archives. 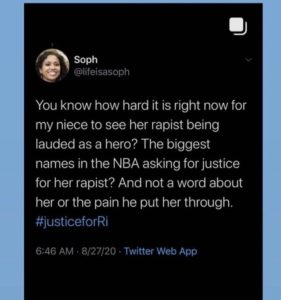 A presidential candidate, and former Vice President, is legitimizing mob behavior by pandering to their false narrative. Meanwhile, a woman who is the text book example of the person who should be protected by his legislation is cast aside. Ignored because she doesn’t fit their needs.

It’s obvious that Joe Biden is most comfortable when he’s pandering to current mob demands. As for his meeting with Blake Sr., I’m sure he can compare parenting notes. Seeing as both men have raised boys into stellar examples of exactly the type of men to avoid.

I suppose it’s better than comparing notes with Blake Jr.