Next post
AOC Wears Politics At The Met Gala 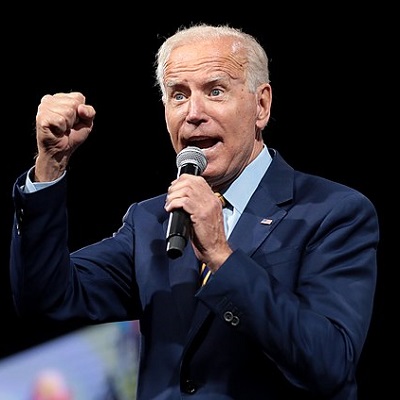 by Shelby Gallagher in Everything Else, Headlines 4 Comments

Monday, Joe Biden made what the left calls a speech only to have his staff cut off the live feed as he started to take questions knowing he can’t be trusted with words.

Like a vinyl record with a crack or a skip on a record player, there are a few moments where the music sounds stellar, but for the most part, the scratches make one want to throw out the record. That is the case with our President.

Joe came out of his basement and made a trip to Idaho Monday where he met with firefighters at the National Interagency Fire Center in Boise. To keep the photo op crisp, almost everyone around the President, including himself, were wearing a mask. Idaho isn’t instituting a mask mandate and we have plenty of examples where the President isn’t wearing one while within six feet of people. Keep this detail nearby, it will come up again as Joe’s day takes a strange path.

Some fun outcomes of the Boise trip include the chanting that has taken our nation by storm. A feisty crowd of hundreds of not-Biden fans gathered with signs emblazoned with “Fudge Joe Biden”, but the other word. You know what I mean. Seems anywhere a crowd is, not just college football games, there that chant will be.

Remember, eighty-one million people voted cheated, for him to be our sitting elected president. Mkay.

Speaking of words, Joe spun another one of his infamous lies. This time it is about his previous place of employment. Today, he reminisced about a job offer from Boise Cascade, a logging company in Idaho.

“Biden… said that he regularly mentioned the job offer to his Senate colleague from Idaho, the late Democratic Sen. Frank Church. ‘I used to tell Frank Church this, I got a — my first job offer, where I wanted — my wife, deceased wife and I wanted to move to Idaho because we — not a joke — it’s such a beautiful, beautiful state. And I interviewed for a job at Boise Cascade…And in the meantime there was a war going on. Anyway. But the whole point was that I used to always kid Frank.’”

The New York Post fact-checked the President and made a few calls revealing Joe can’t be trusted with words to tell the truth. No one at Boise Cascade has record nor can recollect such an offer recalled from the empty spaces of Joe Biden’s memories. The Post also tried to piece together a timeline based on Biden’s memories lie, and that didn’t compute either.

“The Post was unable to locate any prior record of Biden mentioning the company…Biden’s 2007 memoir ‘Promises to Keep’ does not mention the company or a desire to move to Idaho. It’s unclear where the Idaho application would fit in the president’s Delaware-centric legal and political career.”

Since Joe Biden went from law school to law clerking to the Senate during the Vietnam War; the man has held very few jobs in his life outside of the DC beltway. Few.

You must give credit to the President’s technical staff posted at the White House live feed on/off button. They know Joe can’t be trusted with words. After listening to the President’s twenty-six-minute word salad about fires, numbers of acres, thanking firefighters, job offers from Boise Cascade, climate change, global partners, paying for fires, climate change, yada yada yada…I am really missing those twenty-six minutes after listening to that mess of dementia-riddled yammering.

If you want to watch the Boise Cascade whopper, jump to the 20:06 minute mark. By this time, he had cracked a joke, got a laugh, and began spinning his lie; out of his deep, vast, empty memory….

Hold onto that video, it will come in handy. Normally Biden muttering the words, “I’ll take questions…” and pointing to Peter Doucy instead of Kelly O’Donnell, like he did three weeks ago, is enough to wake up the technical crew.

Today was a little different, at the 21:42 mark, he fumbles with what to do after reading from his script. He hands the mic to a George Geissler of the National Association of State Foresters at the table (not wearing a mask), who gives a well-prepared speech about emergency management and more climate change. He drones on for four minutes with his touting of all things firefighting efforts. Joe leans on his hand, appears to take notes, nods a few times. He’s looking Presidential, folks, maybe he can pull it off?

After the long speech of appreciation to our President, thanking him for taking climate change and wildfires seriously, Joe is looking good to get this presser complete with no gaffes, just a lie. Jump to the last six seconds. After receiving four minutes of Presidential strokes from the George at the National Association of State Foresters, Joe can’t help himself, and technical support saves the day.

“’Can I ask you a question?’ Biden asked.
‘Of course,’ Geissler responded.
‘One of the things that I’ve been working on with some others is —'”

Zip. Live feed done. Joe needs a nap. He can’t be trusted with words and only those in the room can reveal what Joe has been working on with others. I’m not going to lie–I don’t want to know how he’s screwing up our country any more than he already has.

While taking a nap on Air Force one, he was off to California to stump for Gavin Newsom who is facing a fierce recall election. Gavin needs all the Presidential help he can get.

Interesting thing media seems to have missed it–no one was wearing a mask. Joe heads to the microphone, near Gov. Gavin Newsom, without a mask. Interesting that he wore a mask in a ventilated room in Idaho but not a plane hanger in California? Idaho, after all, doesn’t have mask mandates and California does. Did anyone tell Joe his mask wearing was backwards? Or maybe it was a subtle jab at a red state’s mask-optional policy? You decide.

Another detail mainstream media seems to have missed in their reporting of Joe’s California trip; Joe is stumping for Gavin and says nothing about Gavin. Instead, Joe reads from a piece of paper about the coming doom climate change will bring, how his new 3.5 trillion-dollar infrastructure bill will save the day and we won’t notice the debt one single bit because it will be over time.

You can watch it. It’s your choice. If you suffer from insomnia, I highly recommend.

Technical support not needed for this speech. Joe knew he couldn’t be trusted with spoken words and did what was written on his speech and left. No questions taken because he can’t be trusted to make a coherent, Presidential answer.

Ladies and gentlemen, this is our President. A President where lies and embarrassments are the order of the day anytime he approaches a microphone—Monday was no exception.