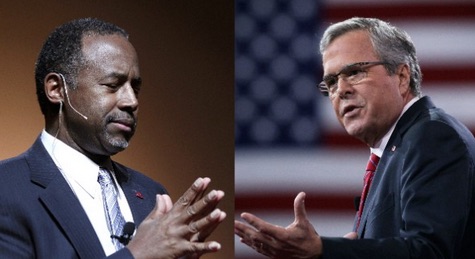 The 2016 election cycle continues to be one of rejecting the GOP establishment, whom many Conservatives hold partially responsible for the dire state of our nation. They told us, “If you just hand us the House, things will change.” They didn’t. Then it was, “If you just hand us the Senate, too, things will be different.” They aren’t. In fact, not only has the status quo been maintained, but one could argue the GOP-lead Congress has handed Barack Obama even more power via the trade deal Ted Cruz now realizes was a whopper of a lie on the part of Mitch McConnell. Well, voters are paying attention, and we’re fed up with the status quo. And Jeb! might want to drop that exclamation point, because the candidate perhaps feeling the brunt of that frustration is none other than the wannabe front-runner. Seems not only are the voters perceiving his candidacy as one faux pas after another, but now he’s shedding campaign fundraisers like Hermione Granger’s cat in August. From Politico:

Three top Jeb Bush fundraisers abruptly parted ways with his presidential campaign on Friday, amid internal personality conflicts and questions about the strength of his candidacy, POLITICO has learned.

There are different versions of what transpired. The Florida-based fundraising consultants — Kris Money, Trey McCarley, and Debbie Aleksander — have said that they voluntarily quit the campaign and were still working with Bush’s super PAC, Right to Rise Super PAC. Others said the three, who worked under the same contract, were let go because they were no longer needed for the current phase of the campaign.

None of the three responded to requests for comment.

Insiders say the campaign doesn’t have a fundraising problem, but rather is battling a “spending problem.” Kinda reminiscent of the current federal government, I’d say. You can read more about the departures here.

Of course, never one to resist ridiculing the competition, the Donald quickly did what he does best: Tweet.

Meanwhile, the Hair, still perched atop the packed field of GOP hopefuls, has another political outsider nipping at his heels, at least in Iowa: One Dr. Ben Carson, who’s bumped Gov. Scott Walker into third place. From Bloomberg Politics:

The latest Bloomberg Politics/Des Moines Register Iowa Poll shows billionaire Trump with the support of 23 percent of likely Republican caucus participants, followed by Carson at 18 percent. When first and second choices are combined, Carson is tied with Trump.

Although he isn’t generating the headlines enjoyed by Trump, Carson has quietly built a dedicated network of supporters in Iowa. During the past month, he also aired more ads than any other presidential candidate in Iowa. Carson has the highest favorability rating among Republican candidates, with 79 percent of likely GOP caucus-goers seeing him positively.

And that, folks, is what I’d call an anti-establishment horse race. Still, the most telling polls will be those released after the field whittles itself down to the true contenders.

Why is Dr. Carson surging in Iowa? Perhaps because, unlike too many of the other GOP candidates, he’s genuine. Here he is speaking at the Iowa State Fair:

The next GOP debate is less than three weeks away. If the twenty-four million that viewed Fox’s debate is any indication, the second just may be the most watched debate CNN has ever moderated. The questions are: Will Jeb! successfully jump-start his lackluster campaign following his less than impressive first debate performance? Or will he continue to sink in the polls? And will Dr. Carson continue to impress with his intelligence, honesty, clear understanding of the damage progressivism has done to minority communities, and recognition of Obama’s continued use of Alinsky tactics to try to bring this nation to its knees (note: he’s currently the only candidate who recognizes that Mr. Obama is not the “stupid leader” that Trump says he is, but rather is intentionally implementing Rules for Radicals upon America)? Or will he stumble and join Jeb! at the bottom of the Snoozer Candidate barrel? If the anti-establishment mood of the country is a reliable indicator, it’s highly likely Dr. Carson will be one of the last candidates standing.