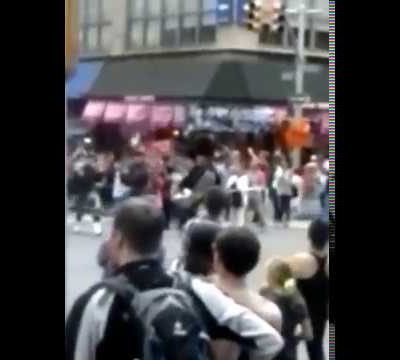 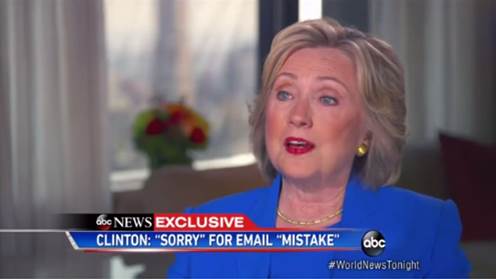 Everyone just needs to calm down now, Hillary said she was sorry.

“That was a mistake. I’m sorry about that. I take responsibility,” Mrs. Clinton said in an interview with David Muir of ABC News broadcast Tuesday night. “And I’m trying to be as transparent as I possibly can.”

So Hillary, in an overwhelming moment of moral revelation, choked back tears as she apologized for her actions. She woke up yesterday morning and suddenly knew that what she had done was wrong, and her supporters deserved an honest, heartfelt apology. Wait… No, that’s not it.

“I really didn’t perhaps appreciate the need to do that. What I had done was allowed, it was above board. But in retrospect, certainly, as I look back at it now, even though it was allowed, I should’ve used two accounts. One for personal, one for work-related emails.”

Better yet, was this almost apology due to a moment of conviction and concern for the truth? No, apparently this sudden wave of transparency came upon the Democrat front-runner after participants in a focus group said they wanted to hear more from Hillary concerning her server issue. It must have been quite the shocking discovery to learn that people actually want an explanation for the nefarious activities perpetrated by a presidential candidate while she was still Secretary of State? I can see why they needed a focus group to figure that out…

The focus group also showed that the email issue was drowning out nearly everything else that Mrs. Clinton was hoping to communicate to voters — something Mrs. Clinton and her husband have complained about to friends.

Read the transcript of the exchange here, or see the full interview below:

Is it too little too late? Better yet, was it even an apology? Commentator John Avlon had some rough words for the string of justifications slowly being released from the “new” Hillary when he appeared on CNN today.

John Avlon: Well, I mean, she has been kind of inching out the apology for a few weeks since I think the campaign realized that the status quo was not working. There are a times when her apologies feel like a bit of a hostage video, but as we learned from The New York Times yesterday, this is also supposed to be the rollout of the new, authentic Hillary, but the problem is that of course when you are telegraphing authenticity via memos, it cuts against the grain of what you need to do, which is be a real person, and that still remains her biggest hurdle as a candidate, and we are seeing the effects of that in the fall of the presidential year.

Joe Scarborough likened it to a hostage video, as well, and Mika Brzezinski noted that Hillary looked “unwilling.” Of course Mika went on to say she believes Hillary can do “ten times better than this,” and “I want it to work for her, which is frustrating.” Don’t worry, Mika, I’m sure her emotional software should have a Sincerity 2.0 upgrade coming down the pipe any day now…

Willie Geist and Chuck Todd even shared what some would label “harsh critique” of a Democrat for MSNBC:

Willie Geist: And Chuck, it did have a feeling of you want me to apologize? Fine, I’ll apologize. You happy now, let’s move on. But unfortunately for her, there’s still many, many more questions that have to be answered. There are emails that will come out once a month for the foreseeable future. This is not an issue that will go away with a single apology.

Chuck Todd: No, and it did feel like this is the correct answer that this is the, I think, Walter was putting it that this is what she is saying what a bunch of donors and a bunch of nervous Democratic activists want to hear from her. The email was the same way. But she is in a negative feedback loop right now. Which is even as she tries to move on, there’ll be a series of emails that come out, that’s a week worth of distilling the emails. Then, of course, she’s got the October testimony. I mean, it’s not going to be until January that there is no more new email information. And, you know, that’s a feed back loop she’s got to figure how to get out of.

It looks as though the vast majority of people remain unconvinced of her authenticity.

Hillary's apology was one of those "I'm sorry, BUT…" things. I've always learned that those types of apologies are insincere.

The inevitable “reboot” of Hillary Clinton’s apology will be fun.

Many are using “mea culpa” to describe her actions, which I find rather silly,

Yet, “mea culpa” means to admit that something is your fault, to embrace your full responsibility. However, this apology comes off as, “I followed the rules, sorry you’re angry.” Sure she says she could have done things differently, but the gist is a salty, teary eyed, emotionally bankrupt quasi-acknowledgment that we’re angry, while also affirming that she didn’t really do anything wrong. I believe that falls under “disingenuous attempt,” not “mea culpa.” Try again, Hillary.