GITMO Prisoner To Be Released With Some Righteous Cash

GITMO Prisoner To Be Released With Some Righteous Cash

Apparently we’re not the only English-speaking nation with politically correct lunatics running the show.

Yes, you read correctly. Saudi-born Shaker Aamer, who has been in prison for 13 years — 7 years longer than the last British prisoner there — is set to be returned to London to his wife and four children. And it appears that he has friends in some very high places: Prime Minister David Cameron pleaded his case to President Obama on a trip to the United States in January, which Obama promptly agreed to “prioritize,” and voilà — Aamer is set for release. Not only that, he’s about to cash in on £1 million in compensation for his troubles and woes at Gitmo.

It turns out that Aamer isn’t the only British jihadi to be paid large sums of money upon release. The British government has already paid out enormous compensations to released detainees to avoid costly court cases that could involve intelligence service members testifying.

If you think this amounts to sheer insanity, you’re not alone. Robin Simcox of the Henry Jackson Society, and author of a book on British Islamic terrorism, would agree. He said:

“. . . the consequences of the Government choosing not to fight its corner and simply cutting a deal are hugely damaging. It should be a source of great embarrassment to the Government that Aamer will earn more for his time in Afghanistan than any British soldier ever did.”

That’s correct. Aamer the jihadist will be rolling in British pounds sterling while about 4000 injured British veterans will have to pony up costs for their ongoing medical care due to paltry compensations from the government.

Oh, but this is justice served — or so says Aamer’s attorney Clive Stafford Smith. Aamer is as pure as freshly fallen snow on the Yorkshire moors. Smith is the Founder of Reprieve.org, an organization of self-described ‘human rights defenders.’ On its website, which also features a petition to ‘free Shaker Aamer,’ is found this heart-wrenching story of poor Shaker. Get your tissues out:

“Shaker is a permanent UK resident, married to a British woman, with four British children living in London. He was volunteering for a charity in Afghanistan in 2001 when he was abducted and sold for a bounty to US forces. He was tortured, and eventually cracked, agreeing to whatever his captors accused him of doing. Satisfied with the confession of an abused and broken man, US forces took him to Guantánamo Bay on Valentine’s Day 2002.”

Chiming in with the Free Shaker crowd is the Russian news site sputniknews.com. Their sob story reads like this:

“Mr Aamer, whose British wife and four teenage children live in London, was taken to Guantanamo in February 2002. He has never been charged with or convicted of any crime, and was cleared for release twice in 2007 and 2009. Yet, he is still languishing in the US detention centre — longer than any other British resident or citizen.” 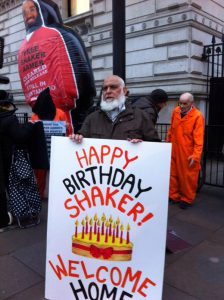 While it’s true that Aamer never faced any formal charges, and was cleared for release in 2007 and again in 2009, US authorities required that he be released to Saudi Arabia rather than London. Moreover, documents leaked by Wikileaks show that Aamer is anything but the innocent portrayed by his attorney.

From Department of Defense documents, November, 2007:

Detainee received advanced terrorist training, indicated his willingness to become a martyr, and served as a sub-commander of al-Qaida forces in Tora Bora. JTF-GTMO determined this detainee to be:

A HIGH risk, as he is likely to pose a threat to the US, its interests, and allies A HIGH threat from a detention perspective
Of HIGH intelligence value

Evaluation of Detainee’s Account: Detainee is uncooperative and continues to withhold information of intelligence value about his extremist activities and associations. Detainee has failed to fully account for his travels and high level associates which have been reported by other JTF-GTMO detainees. Detainee is extremely egotistical, has manipulated debriefers and guard staff, and will continue to attempt to do so to support his political agenda. Detainee refuses to participate in direct questioning, often citing imaginary, or assumed mistreatment of himself, or others, as justification of this refusal in a classic example of al-Qaida counter interrogation techniques.

The entire set of documents can be read here.

Former Florida Representative Col. Allen West is disgusted by this turn of events. He wrote:

So once again, we will release someone who will become a role model and a leader in the Islamic jihadist movement in the U.K. Furthermore, he’ll be rather viable financially — and you can bet he’ll also apply for more government benefits – I doubt he’ll be seeking out employment.

We are restocking the enemy’s leadership while the enemy is still fighting us. We are basically putting the sharks back in our swimming pool while we’re going for a swim — and their ravenous hunger has not subsided, only increased.

The crazy train rumbles on. I’m afraid we’re about to enter a very long and very dark tunnel, and remain there for the next two years.