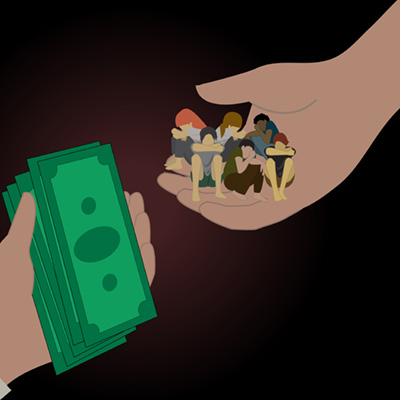 As Newsom gears up a run for the Presidency, he’s been all-in on exploiting every radical Leftwing notion that will get him media tongue-bathing and sweet donations. From his ridiculous Green New Deal stylings – banning gas-powered lawnmowers, cars, trucks, and natural gas hookups for new home construction – to his running political billboards and ads IN the states of Texas and Florida, Newsom is anxious to fire up the Leftwing base with Biden’s fascist claim that Republicans are enemies …

(Newsom) went on, over the course of the next hour, to call DeSantis and Abbott’s treatment of migrants “disgraceful,” to cast MAGA Republicans as “functionally authoritarian” and to chastise his own party for what he has been saying for months is its failure to adequately counter the GOP in the political message wars.

And if you find his crossing state lines to campaign within a number of red states against their duly passed laws only disturbing, well hang on to your hat, Newsom has signed a law that strips custody from any parent anywhere in the nation whose child shows up in California for “gender-affirming healthcare”.

Under Senate Bill 107 introduced by San Francisco-area State Sen. Scott Wiener, California will now become a “refuge” for trans-identifying minors who seek irreversible medical treatment for gender dysphoria. The legislation was supposedly aimed at blocking red states from enforcing laws barring extreme treatments for underage victims, and instead invited those minors to seek surgeries in California.

Newsom, of course, is pretending this legalized child trafficking is all about giving parents the right to seek having their daughters’ breasts removed or their sons castrated far from those icky, hatey hate hate hate Red States who are passing laws that children under 18 should not be medically maimed and sterilized. But the law is quite clear here (all new changes are in blue at link):

3424. (a) A court of this state has temporary emergency jurisdiction if the child is present in this state and the child has been abandoned or it is necessary in an emergency to protect the child because the child, or a sibling or parent of the child, is subjected to, or threatened with, mistreatment or abuse. abuse, or because the child has been unable to obtain gender-affirming health care or gender-affirming mental health care, as defined by Section 16010.2 of the Welfare and Institutions Code.

Read just that small section at the end again. It isn’t just the nightmare of having a non-custodial parent whisking a child to California for puberty blockers and law enforcement is forbidden from honoring any subpoena, warrant or custody orders from out-of-state, but that any trans-influencer on Tik-Tok can arrange to get your child California and parents lose all rights to their child.

As if California hasn’t had issues with child trafficking for things like prostitution for ages, here’s a whole new, legally protected segment of the population to exploit.

But it gets even worse. Since the law forbids all healthcare organizations and doctors from releasing any information related to “gender affirming” drugs or procedures on children to their parents, even under a court-issued subpoena, a child anywhere in this country can, via telehealth, get a prescription for hormones on the downlow.

SB107 was another radical Left law by the very creepy Scott Weiner. His legislative endeavors are textbook, anti-family Marxism. SB107 is that in spades and Gov. Newscum has jumped on the bandwagon in order to pwn the Republicans and non-coastal rubes he loathes. And it isn’t as if Sacramento Marxists were unaware of the growing realization that gender affirming healthcare is creating a generation of victims.

My testimony against SB107 in front of Wiener and the Senate Judiciary Committee. pic.twitter.com/Jcy1gjiOXF

We even covered this transgender craze and the enormous damage it is doing here two years ago. The books, articles and testimonies sounding the real alarm of life-long medical capture of children are out there.

Yet, here we are. While the UK closed the notorious Tavistock Clinic and other countries are stopping medical transistioning for children, California is doubling down on the Lysenkoism. It can’t be because they don’t know.

It’s that they don’t care. These gender-confused children are not real people. They are political pawns to be used against their parents.

SB107 needs to be met by a lawsuit. Newsom cannot be allowed to take a piss on the “full faith and credit” clause of the U.S. Constitution (Article IV, Section 1).

This soulless, mirror-gazing pretender lusts for the Oval Office. And he will destroy children and their families to get there.