by Cassy Fiano in Headlines 11 Comments 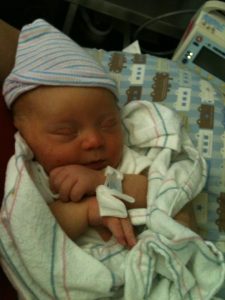 I still remember when I first found out that my son had Down syndrome. It’s not really something you forget. The week before, my husband and I had to decide whether or not to get the amniocentesis. We did, because I just had to know. I didn’t want to have an abortion, but I had to know. I couldn’t go the rest of my pregnancy worrying and stressing about whether he had Down syndrome or not. The next Sunday, which was January 1st, 2012, my husband deployed to Afghanistan. I was about 4 months pregnant. My amnio was scheduled for two days later, on a Tuesday. I received the results over the phone the next Friday at about 6:00pm. They were male, positive for Trisomy 21, or Down syndrome.

It was like my world shattered. I cried for days, and that isn’t an exaggeration. I literally cried, and sobbed, for days. I continued to cry for several weeks, although I guess you could call it an improvement that it wasn’t nonstop anymore. I was so scared. I felt so lost. And one thing I kept thinking over and over again was how he would be treated by the rest of the world. Would he be mocked and ridiculed? Would he be insulted and bullied? Would he ever have friends? Would people see him as a real person? 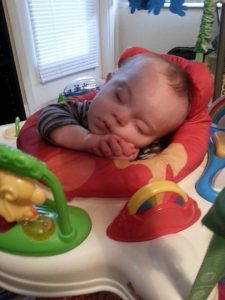 Most of the time, I look back and think about how silly it was to be so upset, to have so many fears. I love my son. He’s the sweetest little boy, and everyone who meets him loves him. There’s never a moment that I regret having him or wish he was different. It takes him longer to do things, yes. But other than that, he’s a normal child. He’s incredibly stubborn — no surprise, considering who his mother is — and really, really loves playing with his brother. His favorite show is Mickey Mouse Clubhouse, and his favorite movie is Frozen. He especially loves music. Normal kid, right? What did I have to be so scared of?

Unfortunately, something comes along occasionally to remind me that I wasn’t entirely wrong. People are still ignorant about Down syndrome. People are still hateful and cruel and thoughtless. A perfect example was a recent appearance by Gavin McInnes on the Hannity show. Check out the video:

Let’s be clear about something here: the use of the word “retarded” isn’t the issue. I don’t like that he said it, but that’s not the truly inappropriate comment. What Gavin McInnes said, and has been trying desperately to ignore ever since, is this:

McInnes: So when someone is as retarded as Al Sharpton is —

McInnes: Sorry. As seemingly similar to someone with Down syndrome as Al Sharpton is… uh… (laughter)

Get it, guys? Al Sharpton is so dumb, he’s just like someone with Down syndrome? Isn’t that funny? Isn’t it hilarious?

McInnes commented on the Youtube video, acting as if his insulting people with Down syndrome is somehow a noble act of taking the stigma away. Because using Down syndrome as an insult is totally a great way to make Down syndrome seem less negative, right?

OK I’ll bite. This is what I said to another mom with a Down’s child…

I get what you’re saying. You hear me say “Al Sharpton’s a retard” and that translates as “retards are garbage.” You’re going through a lot and when people dismiss your child as worthless, it’s painful.
My point was that Al Sharpton is not qualified to be a reporter or any kind of political figure. He has a low IQ. I’m guessing it’s around 90. The average IQ for someone with Down’s is just above 80.
Look, I swear a lot. I see “nigger” and “cunt” as the same as “fuck” and “shit.” I wasn’t trying to say retards are garbage. I was trying to say retards aren’t qualified to have their own news show.
I would recommend getting over that word soon because you’re going to face it a lot over the years and so is your kid. You can make it into a big bad monster or you can laugh it off. It means “slow” or “hindered.” Don’t let it mean more than that.

BTW as someone who is pro-life, I feel I am more pro-retard than any pro-choice liberal. While they worry about offensive terms, they are simultaneously wiping these people from existence.

And finally, as Ann Coulter pointed out, we would never, ever use this term to describe someone with actual Down’s.

My opinion is being too sacred about the word makes these kids some kind of untouchable pariah. When I was young, there were kids with Down’s everywhere. Now they’re gone.
Also, I saw a post where they had a Down’s kid and the words “This is who you hurt when you use that word.” Not if you don’t tell him. When Tropic Thunder came out with the term “full retard,” people decided it was offensive (even though they were making fun of actors who do those roles to get a cheap Oscar) and told kids to go demonstrate. By handing those kids those signs, they took a benign joke (that was in their favor) and made it into hate speech. I can’t pretend to know what you’re going through. I can only tell you my motive behind this stuff and it’s not creating stigma. It’s about taking it away.

He also decided to open his mouth on Twitter, only this time he went after the parents of children with Down syndrome, for having the gall to be offended by what he said.

I have an apology to make about Down's Syndrome…

I used to think the parents of DS kids were selfless but I'm learning they are as sanctimonious and self-indulgent as all parents.

The National Down Syndrome Society has already issued a statement condemning McInnes for his remarks. I personally messaged McInnes telling him that his comments were hurtful and that he should apologize, and this is the response that I received:

And yet, they wonder why so many mothers choose to have an abortion after receiving a prenatal diagnosis. Gee, I don’t know — could the fact that people like Gavin McInnes still find it acceptable to use Down syndrome as an insult have anything to do with that? Could our societal view of Down syndrome possibly play a role?

I’ve said it time and time again. People often blame advancements in prenatal testing for the high abortion rate, but it’s not true. It’s people like Gavin McInnes and Sean Hannity, who either actively further the negative view of people with Down syndrome in our culture or passively do, by sitting there and doing nothing when a person uses Down syndrome as a political insult. It’s situations like this one that proves our fears right. And when the person having those fears proved right is a pregnant mom with a prenatal diagnosis of Down syndrome, what do you think she’s a little bit more likely to do?