Previous post
Picking a guy up at the gym? Totally the same thing as dragging someone out of combat! 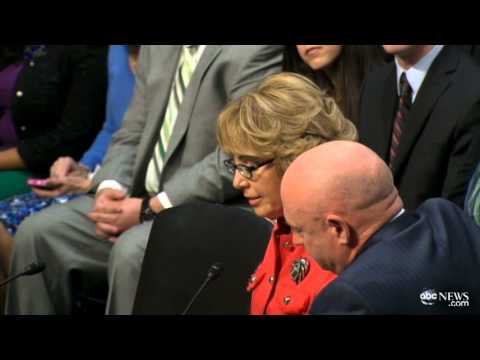 The faux debate over gun control had its first congressional hearing today since The Imperial President proposed his sweeping gun grab reforms aimed at *helping* what the Left is calling “escalating gun violence” in the United States. And who did the Left trot out to further their agenda? Gabby Giffords of course, and her husband, Astronaut Mark Kelly.

I’m sure you’re like me and will never forget what happened to Gabby, who survived a shot to the head two years ago in Tucson during an assassination attempt by a mentally ill stalker which left six people dead. That was an awful event and she is still clearly recovering from that. But the Left in this country is using this woman and her husband as tear-jerker props “for the CHILDREN.” She even said, “speaking is difficult, but this is important.” Really? *insert even more sympathy here* Well played.

Gabby and her husband like to say they are gun owners. So I suppose that, combined with her being shot by a mentally ill stalker, makes her the Left’s ultimate arbiter on the issue of unconstitutional gun grabbing. What will The Kelly’s say next on behalf of the Left? “I’m a gun owner and I’m willing to turn in my weapons, so should you”?

Former Rep. Giffords delivered today’s speech herself with her husband by her side. When she said, “Be Bold, be Courageous” it was a powerful moment and painful to hear – we all know what she’s been through and she’s one brave woman. And as you can imagine, there was the expected widespread emotional reaction to her speech. But interestingly, we’ve now learned that Gabby did NOT write that speech but rather her speech therapist wrote that “wonderful, powerful” statement the Left is so enamored over. It’s nothing new. We’ve known that the Left is especially good at using optics – kids, shooting victims, scared old people – to sell their disgusting and vile agenda. Now if we can just find the speech therapist’s notes on how we address the problem of the violently mentally ill…

Here’s the photo of Gabby’s handwritten testimony and you can watch a video of her testimony below. 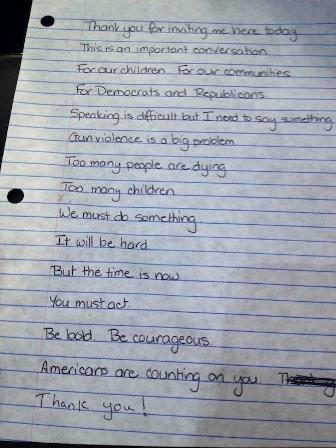 We wish the Kelly’s only the best during this recovery period. Are they sincere about gun control? Probably. But I must ask one question for former Rep. Gabby Giffords and her husband Mark Kelly: please explain to me how what you advocate for in any way comports with the words “…shall not be infringed.”?