by Kate in Headlines 8 Comments

Day 3 of the Olympics and people are still talking about Irina Rodnina, the racist FOV (friend of Vlad) Russian politician, elected to Putin’s United Russia party, and former legendary Olympic figure skater. Apparently, she doesn’t like the Obama’s very much.

Last September, Irina Rodnina made headlines around the world when she tweeted a Photoshopped pic of Barack and Michelle Obama appearing to stare at a banana. You’ve probably all seen the photo. It’s pretty awful and has been around Facebook quite a while. The photo and tweet outraged the Obama administration and prompted outgoing U.S. Ambassador Michael McFaul to denounce Rodnina’s “outrageous behavior, which only brings shame to her parliament and country.” Rodnina did erase the tweet shortly after that, but refused to apologize, making some sort of “freedom of speech” speech, which is entirely ironic coming from a Russian FOV, right? 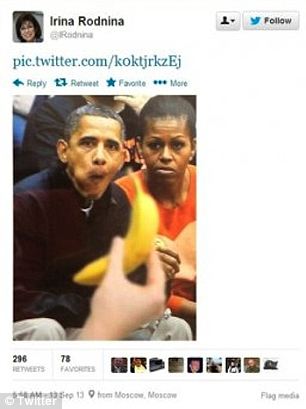 In spite of this pretty outrageous international incident, Russia still gave the great honor of lighting the Olympic torch this past Friday night to Irina Rodnina, along with fellow Olympian Vladislav Tretyak. The Sochi Games’ organizing committee president and CEO Dmitriy Chernyshenko defended the honor of the racist Rodnina by saying this:

“She is a three-time Olympic champion, one of the most respected in the world of Olympic athletes. I want to stress that Olympics is not about politics, and any political talks about discussions are inappropriate.”

Seriously? That’s pretty lame. When haven’t the Olympics been political? And for the record, everyone who reads our blog knows we are not Obama fans here, but there’s just no place whatsoever to interject racism into the discourse. 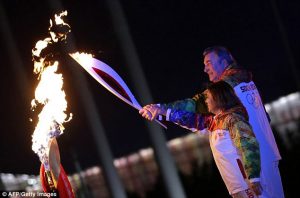 But whatever. So knowing all of this would just add to the whole #SochiFail vibe, why did Vlad choose Irina Rodnina to light the Olympic torch? I don’t really know for sure, but I suspect part of it was a big public “FU, Obama!” for not coming to his “Worst Games Ever” Olympics.

Teach at Pirate’s Cove is blogging about “NY Times: The End Of Snow?”

The Other McCain has many good blog posts up including this one by Stacy on “The Renegade Jesse Myerson”. It’s a must read.

ST at Sister Toldjah has up this post on “#NCPOL: A primer of sorts on the Saturday activist left #MoralMarch in NC”.

Professor Jacobson at Legal Insurrection has up this terrific post today on ““The Patriarchy in Tighty Whities” Week at College Insurrection”.

V the K at Gay Patriot has up this blog post called “Not a Smidgen of Corruption…”. A must see video if you haven’t already.

Glenn Reynolds or Instapundit has many great posts at his blog hub from all over the blogosphere so go check them out! And you can watch Glenn discuss his book “The New School: How the Information Age Will Save American Education from Itself” on John Stossel’s show, here.

Emily at NakedDC has a blog post up called “Skinny Puppy wants royalties for when their music was used as torture at GitMo”. 🙂

Dana at The First Street Journal has up a great post called “We told you so!”.

As always, Michelle Obama’s Mirror has up this fun post “Bliss” in the time of Obama: off grid and down the rabbit hole.”

Jonn at This Ain’t Hell has up a video called “Walking Tall”. Go watch it!

Evil Blogger Lady has up a lot of great posts today including this one “Sochi Olympic Russian Rule 5 with bonus Bob Costas Rant”.

B5 at Blackfive has up this post called “PFC Mark Deville – Silver Star Awarded for Actions in 1984! – SYSK”.

Carlos at Babalu Blog has up this post “A tale of two morons: Charlie Crist and Bill Maher display their ignorance and bigotry”.

Donald Douglas at American Power has up this blog post on “Fifty Years Later, Audience Members Recall the Beatles on ‘Ed Sullivan Show'”.

Neo at Neo-Neocon is writing about “Grammy glamour”.

and finally, Ace at AoSHQ has up this post on “Some Thoughts on the Tea Party and the Evolution of Political Parties”.