Previous post
Zeldin As New RNC Head? Why Not?

Next post
Student Loan Bailout Blocked At Court Of Appeals 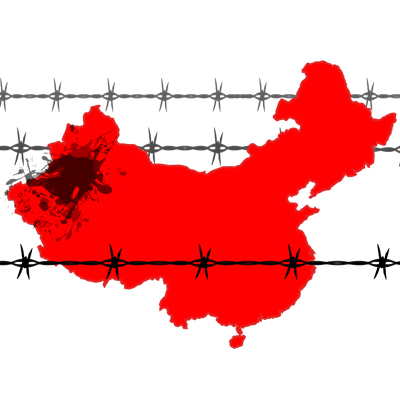 The Chinese REALLY don’t want people asking if there will be discussion concerning human rights violations. So much so that a female journalist was manhandled by a Chinese official.

A member of Xi Jinping’s entourage became physical with an American television producer when she asked a question about human rights in China ahead of President Biden’s first in-person meeting with China’s president on Monday.

White House staff members intervened on the woman’s behalf after the man “yanked the producer backward” after she asked whether Mr. Biden would raise human rights during the meeting, according to an account by another journalist present.

"She lost balance without falling and was pushed toward the door. Two White House staff members intervened saying the producer should be left alone."

One: Kudos to her for addressing one of the many elephants in the room. Two: by the Chinese reaction, it’s glaringly evident that they don’t want to answer any questions pertaining to human rights violations. In fact, one would presume by that reaction, that China has much to hide on this.

It’s the Uyghur Muslim concentration camps for one. The world knows that China has been involved in the most egregious human rights violations pertaining to those poor souls, and yet world leaders, sports teams, and Olympic officials say nothing. Shame on them. Furthermore, additional human rights violations involve how China has atrociously mishandled Covid. Zero Covid will never be attained yet China kept persisting with lockdowns and testing (sometimes multiple times a day), combined with law enforcement action against those perceived to have broken protocols. Only now, three years after all this started has China begun to show signs of relaxing the zero Covid protocols.

China may indicate they want to play ball with the U.S., but I’m willing to bet that it is only because their economics are in the toilet. As Deanna wrote in April, China’s GDP was cratering. It has only gotten worse. It hasn’t helped China that they were cozying up to Russia while Putin was attempting to flex what little muscle he had left.

Except, as a U.S. female journalist was being manhandled by a Chinese official, what does the U.S. decide to do? Back down militarily because it might send the wrong signal.

Republican lawmakers are sounding the alarm over the Pentagon’s plan to pull dozens of U.S. F-15 Eagle jet fighters out of Japan while Tokyo looks to beef up its defense forces and expand coordination with the U.S. in the face of rising North Korean provocations and China’s growing assertiveness in the region.

Pentagon officials say the U.S. will maintain a “steady presence” of fighter jets at Kadena Air Base in Okinawa through rotational deployments of other aircraft, including F-22s currently positioned in Europe, but the plan has drawn increasing scrutiny on Capitol Hill.

Sen. Marco Rubio of Florida and several other Republican lawmakers have questioned the Pentagon’s decision to retire its entire F-15 fleet at Kadena without finding a permanent replacement for the jets. The decision would involve half of the roughly 100 Air Force fighters in Japan.

Yet, as Biden blunders around at the G20 summit, we are supposed to believe that he had a cordial conversation with Xi about all the important topics at hand, or ‘top of mind’ as is now the current idiotic phrasing in politics.

You can darned well bet no one from the Biden camp nor Biden himself discussed the manhandling of a U.S. journalist.

Well, I guess it’s good that human rights violations in Taiwan were discussed. However, as is pointed out, no mention of the Uyghur Muslims (are there any left??), or Covid. I guess those two topics will never be on the table, to the detriment of those suffering and to the detriment of our foreign policy.

Furthermore, this is how Biden handled the meeting with Xi?

What an absolute trainwreck. It got even worse when Biden discussed his meeting with Xi.

Biden reiterates that China isn't an adversary or an enemy but merely someone the U.S. will "responsibly" "compete" against "vigorously" while making sure both countries are "abid[ing] by the international rules of the road." pic.twitter.com/RGlNShKEo3

That is just pure horseshit. China hasn’t abided by ANY international rules for YEARS NOW. The climate change crap and Covid are key examples. The Paris protocols have never been followed by China and never will. *Still waiting for Greta to throw a ‘how DARE YOU’ at Xi and find out what happens. It’s well documented that China has refused investigation or oversight into what happened in Wuhan and the labs.

Finally, a U.S. journalist was manhandled for asking if questions would be asked about China’s human rights violations IN CHINA and reporters are kept from asking about that during Biden’s presser??

Xi is likely laughing his ass off right now. The U.S. is weak, and we’ve just shown again how weak we are. An Administration can’t even issue a statement of protest when a journalist (female at that) is manhandled by Chinese security. Yet we are supposed to believe we aren’t in a Cold War with China right now. Uh huh, sure. Pull the other leg.