Previous post
Spy Satellite With Creepy Octopus "Nothing Is Beyond Our Reach" Logo and Weekend Links!

Next post
Snowden: NSA Spying on World of Warcraft

by Catherine Wilkinson in Headlines 9 Comments

Yesterday, on “Fox News Sunday“, Ezekiel Emanuel the infamous architect of Obama’s signature piece of legislation, pompously declared that a “big PR campaign” will solve the problems of the abysmal and predictable failure of Obamacare.

Here’s the video for your entertainment enjoyment.

It’s also the same video where Dr. Emanuel claims Obama didn’t lie.  You CAN keep your doctor…but you’ll just have to pay a lot more for it.

(I apologize for not being able to post the actual video within this post – having trouble with the linkage.  I blame the NSA and Dr. Emanuel’s big PR campaign!)

Hey Doc, what about all those insufferable television ads (paid for by taxpayers) that have been running non-stop for weeks during prime time hours?  That’s not enough propaganda?  What sort of additional PR could possibly lure the large numbers of young people absolutely necessary to buy into the Ponzi–style scheme of affordable-for-nobody “healthcare” you designed for Americans?

“No one has launched a big PR campaign to get these people signed up because of the problems with the federal website,” he told “Fox News Sunday”.  “We are about to launch a big PR campaign, and that, I think, is going to persuade of lot of people to sign up”.

No one has promoted Obamacare?  Are you freaking kidding me??  That’s all this President, his minions, and the raving lunatics on Facebook and Twitter have blathered and raptured on about for the past 5 years before it was rammed down the throats of Americans.

My ears are still bleeding from all the “PR”.

And “these people” he so cavalierly refers to are actual citizens that have already gotten notifications of cancellations and huge increases in their insurance costs.  And they are pissed.  I don’t think any additional huckstering will help halt the catastrophic avalanche of incompetence and failure that is Obamacare.

Furthermore, Dr. Emanuel, like any other smug and arrogant “architect” of socialist and progressive policy, is underestimating “these people” and their awareness and understanding of a “healthcare” system that burdens them with the cost and very restrictive options for determining their own care.  Yes, there are lots and lots of dummies who think Obamacare is “free” but the majority of “these people” Dr. Emanuel refers to, especially the “millennials”, clearly understand just how “not free” Obamacare is.

More from the Fox News Sunday article linked above:

“The Harvard “Millennials” poll, released last week, found only 22 percent of young Americans — defined in the survey as between 18 and 29 years old — plan to sign up for ObamaCare.  “Actuarially, the (Affordable Care Act) depends upon these young Americans signing up,” Trey Greyson, director of Harvard’s Institute of Politics, said last week.  “Our survey shows that the administration has a lot of work to do to get them on board.

The Affordable Care Act relies on young, healthy people to sign up.  If this doesn’t happen, it could create what some have referred to as a “death spiral,” where insurance companies are taking on older and sicker Americans, causing premiums to skyrocket and risking the health of the whole system.”

Like with all of Obama’s various schemes, his supporters continue to believe that razzle-dazzle, promotion, idolatry, demonizing the opposition and just plain, outright lying will continue to blind American citizens to the truth about Obamacare.  And we’ve seen that belief serve them well within the campaigns, election, and re-election of Obama as POTUS.  A totally unqualified, corrupt, lying, small, vain, and insecure man void of any leadership qualities was elected TWICE to be President.  Why and how this happened will be written about for years and years to come.  People are indeed “blinded by bullshit”.

But for now, for once, I hope Americans are beginning to wise up and are wishing they had paid more attention to the substance of this man, Barack Obama and his ruinous, untruthful agendas.  Obamacare is a bait and switch game and people are beginning to sicken of the scam. 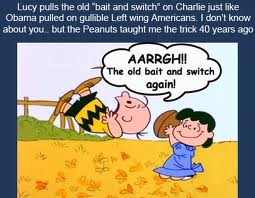 Dr. Emanuel may think more PR will help, but even if they send out twerkers, rappers, clowns, NFL players, and movie stars to “promote”  the glories of “free” socialized healthcare, it will make little difference at this point.  Although it would be fitting.