Previous post
Glenn Greenwald Quits His Own Site Over Censorship

Evita Had Nothing On Alexandria Ocasio-Cortez

Next post
Pregnant Model Worries About Birthing "Another White Man"

Evita Had Nothing On Alexandria Ocasio-Cortez 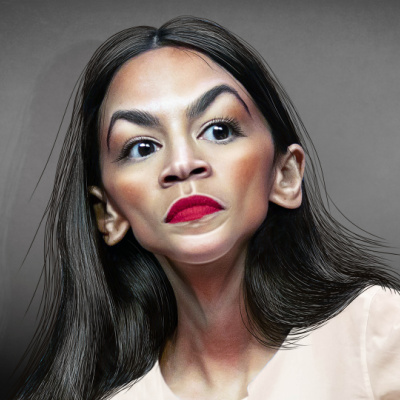 Vanity Fair magazine has as its cover model, this month, Alexandria Ocasio-Cortez. In her mausoleum in Argentina, Eva Peron, known affectionately as Evita, is totally jealous. It’s just not the power or the glowing picture Vanity Fair paints, it’s the awesome designer fashions that AOC wears.

a fair that goes on perpetually in the town of Vanity and symbolizes worldly ostentation and frivolity.

Frivolity and ostentation. If that’s not perfect for Alexandria Ocasio-Cortez, I don’t know what is.

In the Vanity Fair article, first Evita Ocasio-Cortez complains about growing up comfortably, while other immigrant family members didn’t. Then, talks about her poverty after her father died. She uses this to bash Republicans:

It should not be groundbreaking for a political candidate’s life to closely resemble that of her constituents, but AOC’s rise has proved the power of proximity. When a majority of Congress members are millionaires, having lived on the edge of poverty, Ocasio-Cortez says, “makes me better at my job than 90 percent of Republicans, because I’ve actually worked for a living.” While still waitressing at the outset of her 2018 run, she changed her shoes on the subway platform and pushed a granny cart full of fliers and posters around the Bronx. She Swiffered the steps of her own campaign office and lugged in an air mattress as a makeshift couch. She stumped in a pair of sneakers by the brand & Other Stories until they were toast. (They were later displayed in a museum at Cornell University.)

Exsqueeze me, Sandy? Maybe a little research would help you learn. Of the top ten wealthiest legislators in the U.S. Congress, it’s 50/50 between Dems and Pubbies. And, maybe you should talk to Representative Tim Burchett, of East Tennessee. He claims a friendship with you. He graduated from the same public high school as my husband and son, and graduated from the University of Tennessee Knoxville, the same public university my husband graduated from. If you had gone to a public university instead of a private university, Sandy, you might not have any school debt to kvetch about.

When we first sat down in her Bronx office, the New York Times had just published its bombshell investigation of Trump’s taxes. Talking about it winds up Ocasio-Cortez, her tie-dyed mask pulled down to eat a sandwich. “These are the same people saying that we can’t have tuition-free public colleges because there’s no money,” she says, “when these motherfuckers are only paying $750 a year in taxes.” Within a week Trump was in the hospital with COVID-19 and Mitch McConnell was plowing ahead with Amy Coney Barrett’s hearings. “Trump is the racist visionary,” AOC says, “but McConnell gets the job done. He doesn’t do anything without Trump’s blessing. Trump says, ‘Jump.’ McConnell says, ‘How high?’ Trump never does what McConnell says.”

AOC is about as deep as the puddle that Hurricane Zeta left outside my house. Trump only owed $750.00, because businesses prepay their taxes quarterly.

Alexandria Ocasio-Cortez is one of those educated but ignorant types who doesn’t know what she doesn’t know. And, she is completely lacking in intellectual curiosity. Vanity Fair was kind enough to give us a peak behind the scenes in the day of AOC. Yes, she is a lightweight, drunk off the cork.

What really put a knot in my knickers was the designer fashions with which AOC is draped in the Vanity Fair article. Christian Louboutin, Carolina Herrera, Bulgari and Wales Bonner are just a few of the names dropped in the pictures. That’s where the comparison to the late Eva Peron comes in.

Evita is jelly of AOC. Of course, Evita wore fashions better, but she never got this kind of treatment. Lord, please spare us. Let Donald Trump run reelection bigly. Please spare us from any more people like AOC.