Warren Wants to Be Your Tough, Smart Woman

Warren Wants to Be Your Tough, Smart Woman 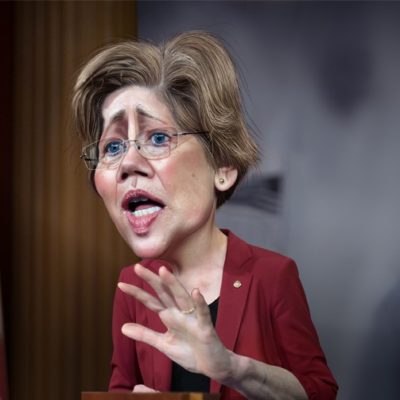 Poor Elizabeth Warren. No one gives her the respect she thinks she deserves. Last night, she was asked “how to get men to vote for a woman for president.” That set the stage for her to not only describe what men want–and I’ll give you a hint. She thinks it’s her–but how sexism is playing a role in road to the primary elections. Damn, but she’s getting awfully good at playing the victim, isn’t she?

Now, it might seem an innocent question. After all, we haven’t had a female president or vice-president. With the ongoing narrative being fed to us by the mainstream media that part of the reason for that is the fact men aren’t ready for a female commander-in-chief, it’s a question some folks feel needs to be asked. So what was Warren’s response?

How about we give them a tough, smart woman to vote for?” she responded at a town hall here in New Hampshire, to loud cheers from the audience.

Pardon me, but what? Can you imagine the outrage if a man said that? But that double-standard of what is or isn’t acceptable is nothing new to She Speaks With Forked Tongue And Raised Fist. As Mark Cuban pointed out, the senator has done a masterful job diverting attention away from her own wealth as she talked about taxing the rich to pay for all her “good” socialist plans.

Even more humorous is the idea Warren believes she is a tough, strong woman. First of all, she seemed to take offense that the question, and a follow-up after the town hall meeting, had been asked. Then there’s the fact she automatically assumed Joe Biden meant her when he made the comment that one of his fellow candidates was “condescending to the millions of Democrats” who didn’t agree with them. The former Vice-President went on to say this particular candidate demonstrates “angry unyielding viewpoint that has crept into our politics,” Now, he could have been referring to Mayor Pete or Kamala Harris. But, as is her wont, Lizzie accepted the title and ran with it.

After all, it presented her with another opportunity to play the victim in an attempt to win over voters. You’d really think she’d learn better but, so far at least, she hasn’t.

But going back to her response. I doubt there are many folks who would object to a tough, smart woman running for president. The question is, who on the Democratic primary platform fills that definition? It certainly isn’t Warren.

First, a tough, smart woman would realize her proposed wealth tax is not only untenable but would raise the hackles of many a liberal millionaire and billionaire. You see, they know what she is trying to do. While many of them don’t have a problem with the state having a hand in our pocketbooks, they do object if that pocketbook is their own.

Then there’s the fact a tough, smart woman would recognize when they’ve made a mistake and admit it. The media, even those outlets that are otherwise in Warren’s hip pocket, have received her Medicare-for-All plan with muted support. Oh, they all want something similar, but they also know the American people want to know how it will come about and what it will cost because we know it will cost something. What we don’t want is a repeat of the Affordable Care Act which did the opposite of what was promised, at least for a great many of us. But Warren isn’t smart enough or tough enough to admit she might have made a gaffe when she began pushing it as hard as she has.

A smart woman would recognize the inherent problem in both these examples–that of pissing off your supporters and driving them into your opponent’s camp. But then Sanders, in the same article in which he wrote about the “angry” candidate, had this to say:

It’s representative of an elitism that working and middle class people do not share: ‘We know best; you know nothing’. ‘If you were only as smart as I am you would agree with me.”

I don’t know about you, but that sounds a lot like Warren to me. What it doesn’t sound like is a tough, smart woman.

Of course, a tough, smart woman wouldn’t have to lie about being a minority to get ahead. Once caught, she wouldn’t continue to double-down on the lie, coming up with one story after another to justify not only the lie but the advantages she gained because of it.

Nor would a tough, smart woman allege she had been fired (or her contract wasn’t renewed) simply because she was pregnant.

But maybe Warren wasn’t saying she is the tough, smart woman men will vote for. . .and maybe I have some land in Florida I’d like to sell you.

But if having a tough, smart woman run is all it would take to elect a woman, why haven’t we had a female president before now? Among the women who have run for their party’s nomination have been Margaret Chase Smith, the first woman to represent Maine in either the House or the Senate and the first woman to serve in both Houses. Then there was Shirley Chisholm, not only the first African-American woman to run for president but the first to run for the Democratic nomination. And let’s not forget about Hillary Clinton. No matter what you say about the former First Lady, former senator from New York and former Secretary of State, she would certainly seem to fulfill Warren’s answer to that voter in New Hampshire.

Maybe Lizzie disagrees.Perhaps she needs to answer this question:

Warren may be many things, but she is not the candidate many men–and many women–will vote for. Her sex has nothing to do with. Nor does the fact she does always look angry (or is suffering a bad case of gas). What does is the fact her policies are not what voters in this country want. She might think we’re dumb enough to think we won’t have to pay for her universal healthcare or any of her other pie-in-the-sky programs, but we understand economics better than she does.

So to answer the question of what it will take to get a man to vote for a woman, here’s my answer: It will take a candidate with a firm understanding of economics, a solid grasp of the issues of importance to the average American and a respect for the Constitution and other founding documents of our great nation. What we don’t need is She Who Speaks with Forked Tongue and Raised Fist.