Next post
The Obama Marriage: Rock Solid or On the Rocks?

by Kate in Headlines 24 Comments

On Friday, Sarah Palin was in California promoting her new show on the Sportsman Channel called “Amazing America” premiering in April. While speaking to the Television Critics Association, she said this:

“I’m especially encouraged to have opportunities to empower young women to get outdoors, be self-sufficient, and work extremely hard so they can live life vibrantly. See, I’m convinced the world will be a better place when we have more girls holding fish in pictures and fewer holding selfie cameras in front of the bathroom mirror.”

So, Piper Palin, a 12-year old prankster with an awesome sense of humor, thought she would respond to her mom’s comments about “girls holding fish” and “fewer holding selfie cameras in front of the bathroom mirror” by taking this picture of herself and a friend, following their basketball game. 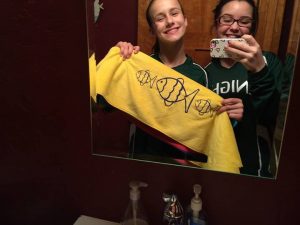 Adorable, right? Sarah Palin thought so, posting this tweet, along with Piper’s photo.

Oh what a 12-year-old sense of humor! Piper just finished up her basketball game, and I told her to read my… http://t.co/wELzSNVHAI

@SarahPalinfan93 Palin is a redneck whore, get over it, Todd has.

@SarahPalinUSA Is Piper the baby of Glen Rice? Afterall, she likes basketball.

There are so many more disgusting tweets that just aren’t fit to post on our blog. None of us can really be surprised though, right? Personal attacks are the specialty of the left. Their philosophy continues to be “disagree with us and we will destroy you and your family.” I mean, we know they will never stop. Ever. The deranged left in this country have a visceral hatred for Sarah Palin and her family. They love to try to relegate her to “irrelevant” or dismiss her as “dumb.” She is neither. She is a fearless and happy warrior, with a happy and stable family, living rent free in their heads, day and night. And Piper? Remember when she gave her baby brother, Trig, that spit bath at the 2008 GOP Convention? Yeah… she’s still a doll and clearly her mother’s daughter.

Our “Great Weekend Blog Reading Links!” are below the fold!

Teach at Pirate’s Cove is blogging about “No Faked Research On Link Between Hotcoldwetdry And Floods Is A Scandal Or Something”.

The Other McCain has many good blog posts up including this one by Stacy on “Lauren Harrington-Cooper and Other Teachers Arrested for Sex Crimes”.

ST at Sister Toldjah has up this post on “House Dems rebel on #Obamacare, vote w/ GOP on security bill”.

V the K at Gay Patriot has up this blog post called “Karl Rove Is on a Mission to Destroy the Republican Party”.

Glenn Reynolds or Instapundit has many great posts at his blog hub from all over the blogosphere so go check them out! And you can listen to Glenn talk about his new book “The New School: How the Information Age Will Save American Education From Itself”, here.

Emily at NakedDC has a blog post up called “Nancy Pelosi: “I have an extraordinary amount of bling.” 🙂

Dana at The First Street Journal has up a great post called “6.7%”. Go read it.

As always, Michelle Obama’s Mirror has up this great post “JOBS! JOBS! JOBS! or, “If you like your job, let’s HOPE you can keep your job.”

Jammie at Jammie Wearing Fools has up this post “Well, This is Interesting: Man Charged Wth ‘Atomic Wedgie’ Murder of Stepfather”.

Jonn at This Ain’t Hell has this post up called “Law Enforcement’s Legit Gripe with the Latest DOJ Nominee”.

Evil Blogger Lady has up this post on “Bob Gates on Hillary Clinton, Barack Obama, and Joe Biden”.

Blackiswhite, Imperial Consigliere at Three Sure Things of Life has up this post called “A Nation of Bullies”.

B5 at Blackfive has up a great post called “Legion and Carhartt Take Care of Those Who Care for the Fallen”. I love this story.

Alberto at Babalu Blog has up this post “Reports from Cuba: The Commander Erased from the Currency”.

Donald Douglas at American Power has up this blog post on “House Democrats Break Ranks With the White House on #ObamaCare Vote”.

Neo at Neo-Neocon has up this post “Criticizing Christie”. It’s just great.

and finally, Andy at AoSHQ has up this post on “”Compassionate Conservatism” … Kill It With Fire!” It’s a must read and don’t forget to check out the comments.