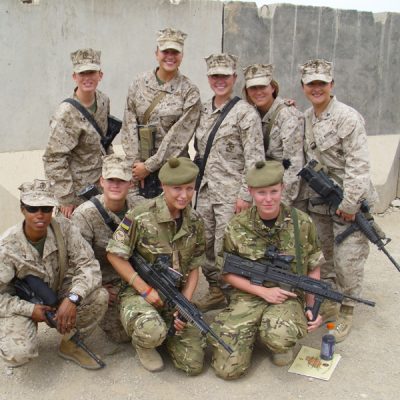 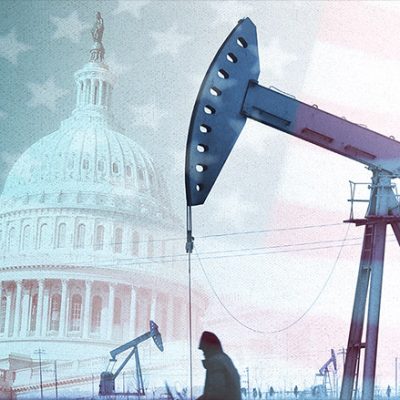 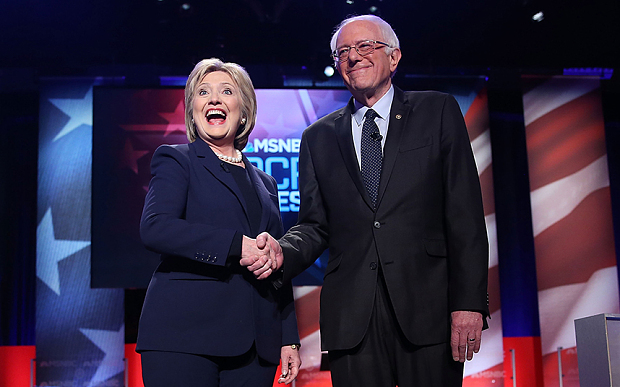 So, last night Bernie and Hillary, the two senior citizen candidates went head to head…or was it toe to toe? Either way, it was well, interesting. 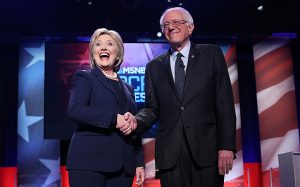 I could pick apart all the things each one said about the other…or even their stance on the issues. But what it came down to was a hissy fit of epic proportions. But first, someone either neglected to do a mic check or both their hearing aids were on the fritz

That was an observation early on… and it just kept getting worse. I mean, Hillary was even advised by the folks over at Time that she needed to avoid the shrill effect, and she obviously ignored it. As for Bernie? Well he just yells anyway sooo… Let the bickering begin!

“Artful smears”?? Who in the world puts those two words together? Oh right, Hillary does. That sounds like a weird back handed compliment to me. By the way, Hillary? Those contributions you speak of? You are getting called out on those and the over-priced speaking fees because they are problematic, not artful. There is a distinct difference. But then again, when asked directly about releasing the transcripts of all her pricey speeches, her answer was very much a Non-Answer!

A head on question asking her to release the transcripts of her highly paid speeches and she responds "I'll look into that . . ." #DemDebate

Oh she’ll look into that alright! Pretty sure she’ll do every tap dance possible, show every bored face necessary, and somehow figure out how to spin that issue as yet another piece of that vast right-wing conspiracy. Especially since one of her lobbyist pals for Goldman Sachs was conveniently in the audience!

Bernie Sanders: "The business model of Wall Street is fraud;" if big banks not broken up, they will need to be bailed out again. #DemDebate

Ok fine. Dismantle Wall Street…and then what happens? See, if you do, then those companies who have (according to Bernie) unlimited funds won’t be around to pay all your socialist little minions their $15 an hour or more wages that you demand! In fact, Bernie?!! I’ve a question for you! Those investment funds that you have? How many of those companies are wandering around Wall Street these days? If you “break up” Wall Street, whatever do you think will happen to your investment funds? Yeppers – that’s right! They’ll go POOF!

Two more items from last night’s debate. The establishment vs the outsider.

Oh good grief! Bernie? You’ve been hanging out as a Senator in Washington DC for how long? And yet you somehow want to paint yourself as an outsider? Ummm, yeah no. Oh and Hillary? Don’t think you’re off the hook either. Lets see, First Lady of Arkansas, First Lady of US for 2 terms, US Senator from New York, Secretary of State, candidate for President. Survey says! They are BOTH establishment whether they want to admit it or not. 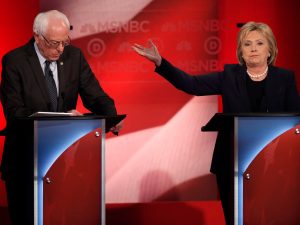 They both have lots of promises. Promises that will give us horribly expensive healthcare, will tank the economy, hinder small business growth, and you know that whole minimum wage raise thing. However, when Hillary took good ole Bernie to task on who did better about keeping promises, she missed a huge elephant in the room of her own making. Yessiree – remember this campaign ad?

Lets just talk about one of those promises that she didn’t keep at 3am shall we?

Benghazi. That. Is. All.

As for Bernie’s promises? He’ll lead us down the path to socialistic destruction if we don’t call a halt to all the free stuff that will come with a price tag which will surpass even our $19 Trillion debt we are currently carrying!

Needless to say, it doesn’t matter which one is more progressive or socialist than the other. Both are equally dangerous because neither one of them is interested in looking out for this Republic. Two Democrats had what they thought was an “intelligent” conversation last night.

Well there is that. The winners of last night’s Democrat Debate were not Hillary Clinton or Bernie Sanders. Nope, not a chance. The inventor of the Mute Button and all hearing aid manufacturers knocked it out of the park.