Conundrum of the Day – Who’s lying? Obama or Hillary Clinton?

Conundrum of the Day – Who’s lying? Obama or Hillary Clinton?

Definition of conundrum:  “a confusing and difficult problem or question”.

First we have Hillary Clinton claiming in her new book, “Hard Choices” that she was asked by Obama to attack Sarah Palin after it was announced she was McCain’s pick for Vice-President.  And, of course, she says she declined:

Former Secretary of State Hillary Clinton reveals in her new book that Barack Obama’s team asked her to attack Alaska Governor Sarah Palin after Sen. John McCain (R-AZ) choose her as his running mate in the 2008 presidential race.

“[The Obama camp] immediately issued a dismissive statement and reached out to me in hopes I would follow suit,” she wrote. “But I wouldn’t.”

The details of the event have been published by CBS, which has already obtained a copy of the book scheduled for release on June 10.

“I was not going to attack Palin just for being a woman appealing for support from other women,” she wrote. “I didn’t think it made political sense, and it didn’t feel right. So I said no.”

But David Plouffe recently and quite distinctly disagreed with Hillary’s comments in her book:

“We never tried to do that,” Plouffe asserted “We did want her to go out there and speak, but not about Sarah Palin’s gender.”

It’s a conundrum!  Who’s lying?  Who’s telling the truth?  What came first –  the the chicken or the egg?

Meh.  As Hillary likes to say, “What difference does it make?”

Both Barack Obama and Hillary Clinton are world-class liars. 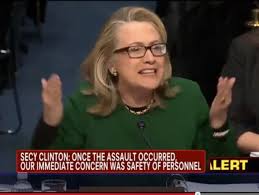