Next post
A Return To Normal After The Election? 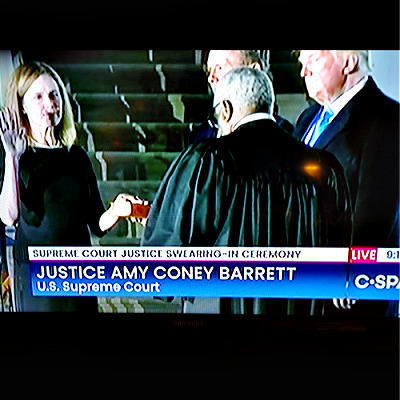 Tears in my eyes tonight as President Donald Trump walked out to the South Lawn of the White House with two other great Americans, Clarence Thomas and Amy Coney Barrett. It’s not just that we finally have a Conservative Woman Justice; it’s that Clarence Thomas, the longest serving Justice swore ACB in. It was majestic and affirming. And, revenge is a dish best served cold. I will explain.

Our Darleen covered the vote in the Senate tonight. As she wrote, the Democrats let themselves down with the spewing of their bitter words. Read her post here.

Even though I am a supporter of President Trump and Amy Coney Barrett, I had no idea what this moment would mean to me. For years, we have been told we had to support women just because they were women, even if we disagreed with their fundamental philosophies. Although I may not always agree with Justice Barrett on her decisions, I am secure in knowing that she knows and loves the Constitution. She does not think that the Constitution is a flawed document that she needs to fix.

Prior to the arrival of Trump, ACB and Clarence Thomas, we heard Irving Berlin’s great “God Bless America”. This cranky, cynical woman was surprised by the tears in my eyes. Here is the video of the event. It is so beautiful:

Amy Coney Barrett is proof that you don’t have to walk in lockstep with the Liberal narrative to have power. Happy Birthday to Hillary Clinton.

CNN had to be the spider in the party punch in its coverage:

The ceremony comes a week before Election Day and a month after a White House Rose Garden event to announce Barrett’s nomination — which has been labeled by public health experts as a coronavirus superspreader event.
At least a dozen people who were at the announcement in September confirmed they had contracted the coronavirus shortly after their attendance.
But unlike the Rose Garden event, when many attendees went maskless and social distancing went largely unobserved, the audience at Monday’s swearing-in was socially distanced and masks were required. The event marked one of the first times the White House has implemented social distancing protocols.

What made this event even more meaningful was Clarence Thomas swearing Justice Barrett in. Revenge is a dish best served cold, the old saying goes. Tonight, for Justice Thomas, was the ultimate revenge. Back in 1991, when he was Senator Joe Biden, that nasty piece of work tried to ruin Clarence Thomas. Do you remember. I remember sitting like a slack-jawed yokel. If you have forgotten, you can watch the video here. If you don’t want to watch the video, you can read the transcript here.

POETIC JUSTICE @JoeBiden was the committee chairman who launched the “high-tech lynching” against then Judge Clarence Thomas.

On the other hand, Nancy Pelosi’s daughter wasn’t happy.

Dark of night. No anti-#covid masks even from the guy who had it and was saved by your tax dollars. No safe distancing. #StolenJustice sworn in by Clarence Thomas. You are being Trolled by Trump. Please #vote accordingly. pic.twitter.com/FT9SNLZWqu

I am one happy woman and the United States of America wins. God Bless America.