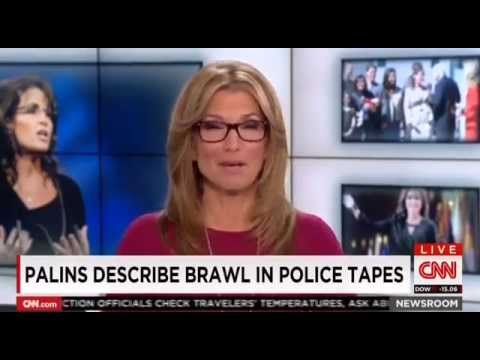 The double standard is staggering and sickening. (See below for UPDATE)

As was well covered last month, the Palin family was involved in what has been popularly called a “drunken brawl” at a party. Of course, the initial coverage made it sound like Sarah herself had grabbed brass knuckles and started clobbering people. The truth is not quite as “fun” for the left, but they are going to have a party with it anyway. Because the truth is that it was a bunch of 20-somethings – Palins included – who decided to mix it up after too much to drink and too many insults exchanged.

The police report paints a confusing picture of the huge fight, with each version of events from those involved differing wildly, no doubt impaired by alcohol.
Indeed, it is not clear from any of the witnesses who started the fight and the report essentially boils down into a he-said, she-said situation.
However, while blame may not be clear, the police report which dates from the night of father Todd Palin’s 50th birthday celebration on September 6, lists Bristol as a suspect, her brother Track, 26, as a victim and Sarah and her husband as witnesses.
It also lists Willow, 20, as a ‘person interviewed.’

Because while the story of Hunter Biden – you know, the son of the SITTING vice-president – getting discharged from the United States Naval Reserve for doing cocaine is pretty much embargoed by the media, CNN anchor Carol Costello is positively giddy over the Palin story and Bristol’s audio tape. Take a look for yourselves.

Someone check Carol Costello’s chair and make sure there was a puppy pad beneath it, because she might have had a little “accident” while going through her spasms of smug glee during that video clip.

Costello – who would never treat anyone with the last name Biden, Obama, or Clinton this way if they were describing a physical assault to police in raw audio – is getting hammered for her hypocrisy.

@CarolCNN @CNNPolitics Glad you think a girl being assaulted by a man is funny. It's ok if she's a Palin, right? #PalinBrawl #WarOnWomen

Yes, just imagine what would have happened to Costello if she had giggled about Janay Rice being beaten after that TMZ video was released. After all, Costello thinks assault is just HYSTERICAL.

Predictably, the rest of the left is having fun with this, because if a Palin gets beaten up, well, that’s okay.

So, take note. It’s okay to laugh at a woman being assaulted as long as you don’t like her or her family. That’s what Carol Costello says. And we “can all thank her later.” Remember that.

I eagerly await her chortling review of Hunter Biden doing cocaine and using his father’s connections to keep himself rolling in that sweet 1 percenter cash. I’m sure Costello will be equally thrilled to be covering that story.

UPDATE:
Oh, this gets even more disgusting. Carol Costello came vigorously to Janay Rice’s defense because – wait for it – she herself was a victim of assault.

You want to know why I never told the authorities, or my family, that a college boyfriend threw me against a wall and knocked me out? Because, at 20, I thought I deserved it. Some of my girlfriends made me feel that way. My boyfriend certainly did. I was ashamed.
You want to know why I agreed to see him again after he assaulted me? Because when all was said and done I could not believe the charming, handsome man I chose to be with could hurt me again.
I quickly discovered I was wrong about that and I left him.

Which makes her laughter at Bristol Palin’s description of assault especially ugly. Why does this woman still have a job in front of the camera?