Next post
Is George P. Bush the GOP's future? 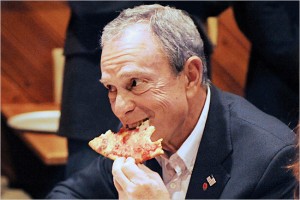 You’d think under a crisis like Hurricane Sandy, Bloomberg could let up on the food nanny stuff. But oh no. As victims of Sandy starve, Bloomberg is banning food donations from all government-run homeless shelters. Why? Because they can’t verify the salt and fat contents.

So you see, you might be starving to death. But under Bloomy, at least you won’t get fat! That’s something to be thankful for. Right?

In one of NYC’s darkest hours, with resources stretched thin in the wake of Hurricane Sandy, Mayor Michael Bloomberg is showing his priorities with a ban on food donations to homeless shelters. No, not because of food contamination, but because the city can’t properly assess salt, fat and fiber in donated food and thereby ensure starving people are getting the optimal levels of nutrition. Can’t have dumpy-looking homeless people on the streets! We knew Bloomberg was a health nut, but maybe he’s just anti-food? Maybe put this one to a vote — it’s hard to imagine what harm fresh soup and bagels (two items that have already been turned away) could do to a hungry person.

I guess you can look at it this way. People might die of starvation, but at least the obesity epidemic will end!