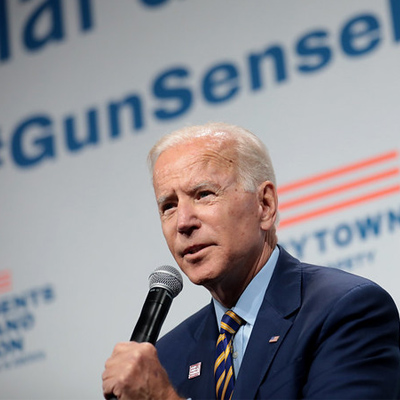 The Democratic debate in Charleston, SC, was once again a slugfest with all the candidates taking aim at Bernie Sanders. That was evident in the amount of time each candidate got to speak. Bernie led the pack, with Bloomberg coming in second. But Joe Biden, the supposed frontrunner, only came in fifth of the group of seven. So he had to make the most of his time with impassioned speeches.

Biden got so wound up in an attack on Sanders he claimed that 150 million people have died since 2007 because of guns. That’s right, 150 million.

“Imagine if I said we give immunity to drug companies, we give immunity to tobacco companies. That has caused carnage on our streets. One hundred and fifty million people have been killed since 2007 when Bernie voted to exempt the gun manufacturers from liability. More than all the wars.”

Keep in mind that in 2019 the Census Bureau estimated the population to be about 330 million. So basically Joe killed off half the US population.

I wonder where he got that information — did Corn Pop tell him that?

The Biden campaign, of course, shrugged off the gaffe. “He meant 150k. He’s used that line multiple times before.”

So why didn’t the moderators question his claim?

The simple fact is that the media, just like the rest of the Democratic candidates, believe every anti-gun narrative they hear. For example, they pushed the falsehood that there were “11 school shootings” in the first 25 days of January, 2018. They inflate gun deaths by adding suicides to the number of homicides. Plus, when it comes to discussing types of guns, they make fools of themselves by talking about “rapid fire magazines” or a “chain saw bayonet” attachment. And let’s not get started on their looney label of the semi-automatic AR-15 as a “weapon of war.”

So no wonder the moderators didn’t question Joe Biden’s assertion that 150 million Americans have died from gun deaths since 2007. It fits their narrative, so it’s all good.

But that wasn’t Biden’s only gaffe of the evening, either. He virtue-signaled how he, unlike Bernie Sanders — or President Trump for that matter — would never meet with dictators.

Hold on — isn’t that a picture of Biden smiling with Nicolás Maduro, the socialist dictator of Venezuela? The guy who has turned the nation into a hellhole?

Biden says he won't meet with dictators. What do you call the smiles and laughter with the DICTATOR OF VENEZUELA? pic.twitter.com/wv68uGzk5P

Desperate Joe is desperate. He pushed the moderators to give him more time to talk, calling them out when he thought they cut him off. He used his time to push a preposterous gun deaths number which no moderator countered. And he finished his evening with one more gaffe: he stopped in mid sentence when ranting about North Korea.

“Why am I stopping? No one else stops.”

In the old vaudeville days, someone offstage with a hook would drag a flailing performer from the stage. I think the time has come for someone to use the hook on Joe Biden.