Next post
Portland: Not All Shoplifters Booked Into Jail 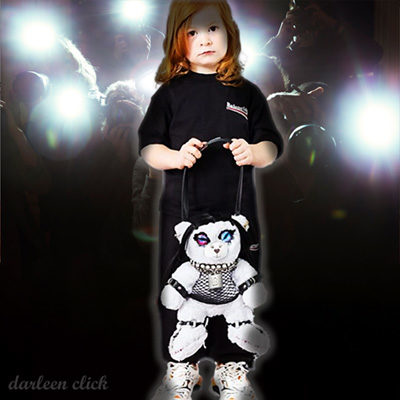 Oh, the fashion word can be so cut-throat! Despite apologies from Balenciaga that were issued earlier this week, some insiders do not want to be associated with creative director, Denma (“Denma”) Gvasalia.

And Demna, himself, is not taking any real responsibility, either. Apparently, as the story goes, Demna did not know “what the campaign was going to look like” after it was photographed.

Seriously, darlings? Doesn’t everything in a campaign go to photography and come back in a proof before it goes live? Demna is feigning innocence on this one and, just last week, Balenciaga filed a $25 million lawsuit against North Six, the producers of the ad campaign. People of the fashion world are speaking out:

Oh please! Demna doesn’t put out one image that he hasn’t approved. Demna is not only the creative director, he’s driving all the imagery behind the campaigns. To blame a production company is nuts.”-Olga Liriano, model booker, magazine editor

Show me one “creative director” in the fashion world who does not want his/her stamp of approval on everything. They are the brand. Demna is Balenciaga. Right down to his Balenciaga Couture Engineered by Mercedes-AMG F1 Applied Science face shield that he now wears on the regular. B-T-Ws…this monstrosity will cost you about six grand to acquire. High-fashion, as they call it. It’s amazeballs what stupid people with money would be willing to do with their money.

Speaking of stupid people, Kim Kardashian thinks Balenciaga is quite great. Though, she stands a lot to lose if she were to throw her dear friend and Met Gaga sidekick, Denma, and the fashion house itself that has her dripping in couture under the bus. Doesn’t matter that she has kids herself. She’ll throw out a (regular-sized compared to her surgically altered-ass), half-assed apology to save face.

I appreciate Balenciaga’s removal of the campaigns and apology.”-Kim Kardashian

Who wants to wager Kim saw the campaign before they went to print? Moving right along and down the runway…

In speaking with them, I believe they understand the seriousness of the issue and will take the necessary measures for this to never happen again.”-Kim Kardashian

Please, Kim! This woman’s response was written oh-so-carefully by her PR firm. What am I, personally, waiting for? The Kardashian-worshipping, mega church pastors and their kids who don Balenciaga on stage while asking the congregation to tithe their 10 percent. They’re out there. Can’t wait to get their take on this!

Getting back to the story at hand, the morally superior betters at Balenciaga want YOU to know they are upstanding citizens, they want you to know they had NO IDEA about the creative direction of the campaign. They are so morally upright, they even cut Kim Karsadhian’s ex-husband Kanye, Yeeze, Ye-whatever the hell he is calling himself these days-loose because he is a bigot!

Denma continues to hide behind his ugly face shield as we hear yet from another insider:

We’re not talking about some Joe Schmoe tractor company in Brooklyn. This is Balenciaga — where they have a top-of-the-line team when it comes to line retouchers, editors everything. They’re playing (North Six) for fools, throwing a summons their way and expecting people to believe the head of Balenciaga didn’t know what was going on. The lawsuit threat looks like a performative stunt to distract from what really happened.”

People in the industry often want to push the envelope and be what they think is cool and edgy — but they don’t think things through and nobody will tell them no.”-Lorin Cole, The New York Post

Demna is often thought of as fashion’s playful saboteur, suffusing his work with comedy bordering on contempt — and yet behind it all is a kind of sincerity that can sometimes be difficult to discern amid the spectacle.

No other working designer is as confessional; with each collection, what seems like irony is often a chapter in an ongoing autobiography.”-Nick Haramis, The New York Times

Kids holding bondage teddy bears. Comedy bordering on contempt? And where is this discernible sincerity amid the spectacle? Literature on child pornography? “Oh, stop”, they will say! “Denma is a creative genius! Leave him alone! He is just being a playful saboteurrrrrrrr“!

We strongly condemn child abuse; it was never our intent to include it in the narrative. Our plush bear bags and the gift collection should have not been featured with children.”-Balenciaga

More from the bondage boot-licking piece in The New York Times:

Then there’s his resort 2023 collection for Balenciaga, which included models in wool coats and sequined gowns worn over full-body latex bondage suits — for another designer, the S&M gear might have been little more than an outré gesture, but that, he says, ‘was very personal to me, part of my sexual education.'”-Nick Haramis, The New York Times

An Outré gesture? Well, mais, oui, I would say it was outré AF! But, perhaps it was a confessional of sorts…an ongoing autobiography. Sexual education? Okay, groomer.

Again, to reiterate…the ad featured kids with bondage teddy bears. There is no masking the the obvious. Not even a $6,000 dollar piece of trash on Denma’s face can cover this up.

Move over, Mugatu. Derelicte is soooooo 2001. Make way for Demna’s new Balenciaga line: Dépravation. (Pivots left, look over her shoulder and struts out).