Next post
The Islamic State is failing at being a state

Last night a 6-year veteran of the Berkeley, Missouri Police Department; a suburb right next to Ferguson, Missouri drove to a Mobile gas station near the 6800 block of N. Hanley Road to conduct a routine check. The officer arrived at the scene, got out of his vehicle and started talking with those loitering in the parking lot. Readers can watch the events unfold on the surveillance video provided by the St. Louis County Police:

As you can see, one suspect pulled a gun on the officer. The officer, rightly fearing for his life, pulled his own weapon and fired three shots. One round fatally wounded the suspect, another hit the tire of the police vehicle, and a third has not been found. The second suspect fled the scene. According to St. Louis Today:

From the videotape released by St. Louis County Police and Belmar’s description, the officer was near the front driver’s side of the vehicle and the suspect was on the other side, near the car’s headlights, when the shooting occurred.

As the officer points his gun, he is backing away and loses his balance, Belmar said. As he fell, he dropped his flashlight and fired off at least three shots.

The suspect was pronounced dead at the scene by EMS units. Berkeley police called the county’s crimes against persons unit at 11:45 p.m., and they arrived at the scene at 12:15 a.m., Belmar said.

The body, which was covered and concealed from the crowd by a partition, was removed from the scene at 1:40 a.m., Belmar said.

Within a very short time after the suspect, now identified as Antonio Martin, was shot the scene became littered with protestors. Officers from multiple agencies were called in to deal with approximately 200-300 protestors. And yes, you guessed it, the protestors weren’t interested in the facts of the case. Nope, they were more interested in sporting yellow crime scene tape, throwing bricks at the police, setting off firework devices, breaking windows, and having 4 of them get arrested for assaulting police officers. 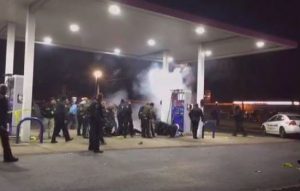 In fact, some protestors didn’t even know what really happened. According to Fox News:

Orlando Brown, 36, of nearby St. Charles was among the protesters. He said he didn’t have all the details about the shooting but said he wondered if it was a case of police aggression.

“I understand police officers have a job and have an obligation to go home to their families at the end of the night,” he said. “But do you have to treat every situation with lethal force? … It’s not a racial issue, or black or white. It’s wrong or right.”

Its a question of wrong or right??!! Well Orlando, just what would YOU do if someone was pointing a gun at you? Ask the person to join you in a sing-a-along? Spend time deciding whether you should respond at all? Oh I know! Maybe you would reach for your Taser or Mace and aim it at the guy who is POINTING. A. GUN at you! Yeah, I didn’t think so. When Chief Belmar was questioned about that very same thing; Matthew Weaver of The Guardian reports:

Belmar said it was “unreasonable” to expect the officer to have responded with mace or a taser when he was faced with a suspect raising a gun. “The officer responded with what he thought was commensurate force at the time,” Belmar said. He added: “Bad choices were made … this individual could have complied with the officer. It didn’t have to end with him approaching him with is arm extended and an 9mm pistol in his hand.”

EXACTLY! You see, Antonio Martin may have been 18 years old when he died; however, this young MAN has a record of making some very bad choices since his 17th birthday. And this record isn’t one that has penny ante stuff in it either. Nope, this young man was quite busy during the past year. His criminal record includes multiple theft charges and three ARMED assaults. Yes, you read that correctly. In the space of one year, Antonio Martin engaged in armed assaults against people, and racked up a series of thefts. His final choice was the worst of all. Because of Antonio Martin’s decision to pull a gun on a cop; Antonio is dead, a police officer is on administrative leave, protestors wreaked havoc yet again, the media is writing their own slanted narratives and getting duped, and the city of St. Louis is left wondering when the next shoe will drop.