Previous post
The Hideous Fantasies of ISIS: Where are the Muslim Defenders of the Jordanian Pilot?

Next post
Official End to Afghanistan Combat Declared - Did Anyone Tell the Bad Guys?

On Sunday December 28, early in the morning an AirAsia passenger jet disappeared. According to Jethro Mullen of CNN:

The aircraft, flying from the Indonesian city of Surabaya to Singapore, went missing as it flew at 38,000 feet over the Java Sea between the islands of Belitung and Borneo — a heavily traveled shipping channel with shallow waters, according to Indonesian authorities, who are leading the search and rescue operations. 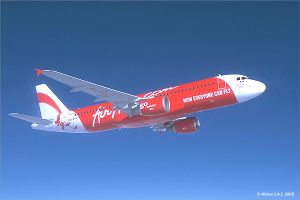 Flight QZ8501 had just left Surabaya on its regular early morning flight to Singapore. On board were 162 people. They are from Singapore, Britain, Indonesia, France, and Malaysia. They include 7 crew members, 16 children, and a baby. Friends and relatives have gathered at both airports to wait word on the search. In the meantime, AirAsia CEO, Tony Fernandez, expressed his thoughts via Twitter:

My only thought are with the passangers and my crew.We put our hope in the SAR operation and … http://t.co/m95Ei6OnEP

I am touched by the massive show of support especially from my fellow airlines. This is my worse nightmare. But there is no stopping.

Our priority is looking after all the next of Kin for my staff and passangers. We will do whatever we can. … http://t.co/6BFsUR7zDS

Many news outlets and Twitter users are already drawing comparisons between this tragedy and that of Malaysia flight MH370. However, while there are certain similarities, there are also distinct differences. AsiaAir and the pilots of QZ8501 had excellent track records as reported by CNN:

The missing plane is operated by AirAsia’s Indonesian affiliate, in which the Malaysian company holds a 48.9% stake, according to its website.
AirAsia has a “very good” reputation for safety, CNN aviation correspondent Richard Quest said.
Flight 8501’s captain has a total of 6,100 flying hours, and the first officer a total of 2,275 flying hours, the airline said. The plane’s last scheduled maintenance was on November 16, it said.

Malaysia Flight MH370 was owned and operated by Malaysia Airlines and was a Boeing 777-200ER. The AirAsia passenger jet is an Airbus 320-200. Two distinctly different passenger jets and the crews had different levels of experience.  The Airbus itself has a good track record as does AirAsia.  Fox News reports:

The Airbus A320 is a workhorse of modern aviation. Similar to the Boeing 737, it is used to connect cities anywhere from one to five hours apart. There are currently 3,606 A320s in operation worldwide, according to Airbus. The A320 family of jets, which includes A319 and A321, has a very good safety record, with just 0.14 fatal accidents per million takeoffs, according to a safety study published by Boeing in August.

AirAsia, which has a presence in several Southeast Asian countries, has never lost a plane before. AirAsia Malaysia owns 49 percent of the Indonesian subsidiary. The airline typically flies short routes of just a few hours, connecting large cities of Southeast Asia. However, recently it has tried to expand into long-distance flying through its sister airline AirAsia X.

Furthermore, it must be pointed out that the two passenger jets disappeared in two different areas. 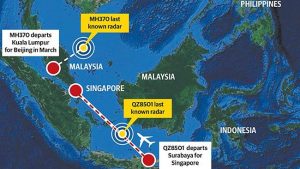 Malaysia Flight MH370 disappeared 10 months ago somewhere over the Indian Ocean, after deviating from its flight path several times. The search, conducted over very deep ocean waters, was difficult from the start due to the uncertainties of the jet’s flight path after all communication between towers and the plane were lost. Meanwhile, AirAsia Flight QZ8501 had a scheduled flying time of less than 2 hours on a relatively straight flight path between Surabaya and Singapore, and it stayed on the flight path. Also, the waters along QZ8501’s flight path are quite shallow compared to the Indian Ocean where MH370 was presumed lost.

While families wait and pray for good news, aviation experts are asking interesting questions. Particularly in light of the A320’s captain’s message requesting the flight redirect because of bad weather. Yesterday Peter Smith, an aviation expert spoke to news.com.au. He stated:

it was curious that if QZ8501 had struck bad weather, why no further contact was made with Air traffic control.
“Even if we assume that the aircraft did encounter such incredibly adverse weather conditions that it broke up in midair or the conditions led to the pilots losing control, there are still a number of questions that need answering,” said Mr Smith.
“Obviously the first priority for the pilots is to fly the aircraft but relaying a message to Air Traffic Control (ATC) about what’s happening only involves depressing a single button on the control column and simply speaking.
“It would also only take a few seconds to squawk 7700 (emergency) on the SSR box which would alert ATC to there being a problem although not what the problem was.”
He said severe weather was a common feature of Indonesia at this time of year, but it was almost unheard of for a modern aircraft to be brought down by turbulence at altitude.
“It’s a different situation when the aircraft is close to the ground but at altitude, even if the aircraft stalled, there would be ample height for the aircrew to recover the situation and regain control,” Mr Smith said.

Most certainly these are valid questions and comments. It is highly likely there will be more of the same over the next few days. Meanwhile, as search operations are suspended until Monday, the families and friends of the passengers and crew along with employees at AirAsia can only wait. Let us join them in praying that their loved ones will be found.