Next post
No Handshakes Or Elbow-Bumps For Trump Biden Debate 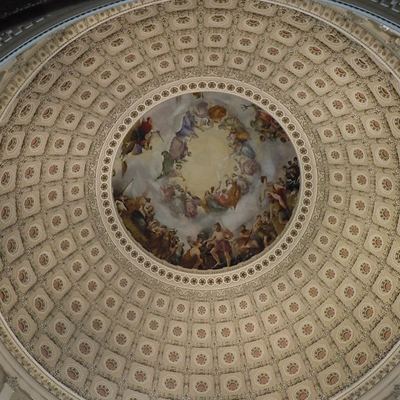 On October 12, Amy Coney Barrett, nicknamed the “Glorious ACB,” will enter the Thunderdome of the U.S. Capitol. There, Democrat senators will try to destroy her with smears and accusations. They may not have the votes to defeat her, but they’ll use her confirmation hearings to rally the Left for Joe Biden.

They will play, as our Deanna put it, their version of Calvinball, where there are no rules, no limits of decency to be followed. In fact, Chuck Schumer hinted as much in his comments about President Trump’s nomination of ACB. According to Schumer, “just about every American will be hurt by Judge Barrett’s views on the issues.”

Yes, ACB will usher in a world where there are no more labor unions, the environment will disintegrate, and gay people will no longer be able to marry. And, of course, women will have no “rights” — in other words, access to unrestricted abortion. She will summon the Stay Puft Marshmallow Man to invade the streets of New York City, too, I suppose.

All joking and Ghostbusters references aside, the Senate Democrats have a long history of dragging SCOTUS nominees through the mud — provided, of course, a Republican president nominated them. Nor did this custom start with Justice Brett Kavanaugh. The nasty practice started in 1987, when they successfully derailed the confirmation of Judge Robert Bork.

President Ronald Reagan nominated Bork, then a judge on the U.S. Circuit of of Appeals for the District of Columbia, to the Supreme Court. Bork was a man of impressive credentials and towering intellect. The American Bar Association pronounced him “well qualified” to sit on the court. But Bork was also a constitutional originalist, which, in the eyes of Democrats, was an unforgivable sin.

So when Robert Bork entered the Thunderdome, Sen. Ted Kennedy pontificated that in Bork’s America, there was no place for blacks or women. In the summer of 1969, there should’ve been no place for a woman in Ted Kennedy’s Oldsmobile, either. But by 1987 that was, ahem, water under the bridge.

In the end, Judge Robert Bork did not ascend to the Supreme Court. But the Democrats sensed that “borking” was a good strategy, and they tried it again in 1991, after President George H.W. Bush nominated Clarence Thomas to SCOTUS. Then law professor Anita Hill accused Thomas of sexually harassing her when she worked for him at the Office of Civil Rights. References to pubic hair on Coke cans and a porn star named Long Dong Silver entered public discourse. It was disgusting, filthy, and uncorroborated. And who was head of the Senate Judiciary Committee and in charge of the confirmation hearing? None other than Sen. Joe Biden.

Thomas responded to his inquisitors with a combination of quiet rage and eloquence, the likes of which have not been seen again, not even during the Kavanaugh hearings. Clarence Thomas was magnificent. He emerged from the Thunderdome scarred, yet defiant and unbeaten.

Move up to 2005, when President George W. Bush nominated John Roberts to the Supreme Court. After discovering that Roberts and his wife had adopted two children from South America, the New York Times began digging into adoption records. Not only that, but Democrat allies at NARAL Pro-Choice America slandered Roberts in an ad. Backlash ensued, so NARAL quickly pulled it. However, the internet, as you know, is forever.

Quick reminder that Democrats and the left have a long tradition of smearing the SCOTUS nominees of Republican presidents. Here's a slanderous ad that NARAL Pro-Choice America ran–and quickly pulled amid backlash–during the confirmation hearings for John Roberts in 2005. pic.twitter.com/kwvwF23yTE

The following year another one of President Bush’s appointees received the smear treatment from the Democrats. Judge Samuel Alito, like Robert Bork, tackled Ted Kennedy in the Thunderdome. Kennedy accused him of racism due to his membership in a group he had belonged to 30 years earlier called the Concerned Alumni of Princeton. Someone in that group had written an article which Kennedy felt was racist and anti-feminist, so he demanded to know if Alito agreed with the writer. Alito responded that he would have never endorsed the article, but that wasn’t enough for Kennedy. Instead, he said that Alito’s responses “are extremely troubling and in fact I don’t think that they add up.”

Meanwhile, Samuel Alito’s wife, Martha-Ann Bomgardner, had enough of hearing Kennedy and other Democrats insinuate that her husband was a “closet racist.” She fled from the Senate floor in tears. But such are the strategies of Democrat senators who will use any sort of sleaze to undermine SCOTUS nominees of Republican presidents.

So what will happen when Amy Coney Barrett enters the Thunderdome? After all, not only is she the nominee of a Republican, but the Republican whom Democrats hate the most. And a Presidential election is coming soon.

I’m sure they’ll trot out whatever aspersions they can heap upon ACB’s devout Catholic faith. In fact, anti-Catholicism has already reared its ugly head in the Senate, as our Toni has noted. Plus, members of the Hollywood peanut gallery like Bill Maher have also ridiculed her faith. On HBO, Maher called her a “fucking nut” while members of his audience clapped and barked like trained seals.

But Democratic senators may be treading dangerous grounds if they seek to placate their allies on the Left by smearing Amy Coney Barrett. She’s not only brilliant, but a truly decent and honorable woman. In an opinion piece at Bloomberg, Noah Feldman, a professor of law at Harvard, wrote that ACB “deserves to be on the Supreme Court.” After all, he’s known her for over 20 years, he says.

“I disagree with much of her judicial philosophy and expect to disagree with many, maybe even most of her future votes and opinions. Yet despite this disagreement, I know her to be a brilliant and conscientious lawyer who will analyze and decide cases in good faith, applying the jurisprudential principles to which she is committed. Those are the basic criteria for being a good justice. Barrett meets and exceeds them. . . .”

“To add to her merits, Barrett is a sincere, lovely person. I never heard her utter a word that wasn’t thoughtful and kind — including in the heat of real disagreement about important subjects. . . . .This combination of smart and nice will be scary for liberals.”

When ACB enters the Thunderdome next month, Democrats should tread lightly. They should treat her with respect. But if precedence is any indication, they’ll go for her jugular. It’s their default setting, after all.