The news is out today that Ariel Castro, the slime who kidnapped three women (two of them minors when kidnapped), imprisoned them, and systematically raped and beat them over the course of ten years, has taken a plea deal.  This – there are barely words that are fit to print for him – bastard was sentenced to life plus 1000 years in prison.  The women he kidnapped were 14, 16, and 20 when he stole them away from their lives and families.  They now face the challenge of rebuilding their lives with their families, who lived in fear and agony over not knowing their fate, with the ghost of a decade of hell in their memories.

We rightly condemn Castro for his crimes.  But let us contrast that with the brave testimony and pleas of 11 year old Nada Al-Ahdal of Yemen.  MEMRI TV has put up a video of Nada describing the fate her family had planned for her – marriage, now.  At 11 years old.  She protested, and was told that if she fled to an uncle (who she did manage to escape to), she would be killed.  Now she says to the camera, “I’m better off dead.  I would rather die.  I’d rather live with my uncle than with these people…. What kind of people threaten their children like that?” Even though its hard, watch the entire video. 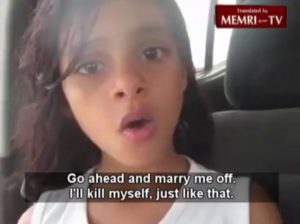 Save for one relative that Nada knew she could turn to, she was alone in a vile system that finds it perfectly acceptable for a child of ELEVEN to be married off.  And she’s not being married off to another 11 year old.  In 2010, another story out of Yemen told of a 13 year old child dying after being violently raped by her 23 year old husband.  The details of that story are unbearably graphic and heartbreaking, as the “husband” wanted the 13 year old be tranquilized so she would not resist him.  And even her own mother initially urged her to allow him to “have sex with her husband so as not to shame the family.”  She eventually died as her mother sat by her side and watched.

Western society sees a monster like Ariel Castro, who took teenage girls against their will to serve his own sick, sadistic purposes, and wants him punished by every means available within the law.  He robbed two women of their childhoods, and he took from all three women their lives for ten long years.  However, when they were finally free, they found the open arms and loving hearts of their families to welcome them back.

In Yemen, and in other Islamic societies,  families are giving over their daughters into that same kind of sadistic sexual slavery, with little more than hand-wringing and tsk-tsking from the West.  And we have leaders who still insist on saying that “Islam is a peaceful religion” over and over and over again.

These are not isolated incidents.  This is how Islam systematically degrades women: by telling them when they are children, they are nothing more than property to be bought and sold, used and abused, at the will of fathers and husbands, all in the name of Allah.

Nada escaped her fate, but listen to her haunting words.  They should serve to prick our consciences and keep our eyes wide open when hearing platitudes about the “Religion of Peace.”