Next post
Nancy Pelosi Stands For Taiwan Against China Threats 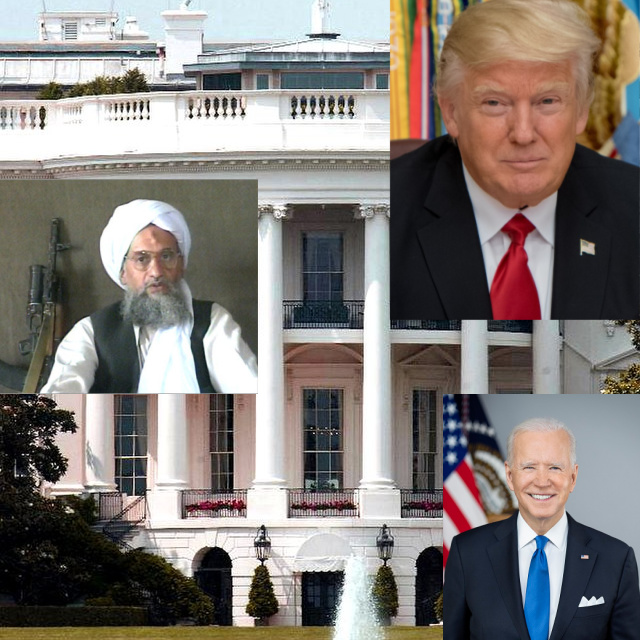 They can’t help themselves. Trump Derangement Syndrome (TDS) is real and apparently incurable. This past weekend, the CIA used Hellfire missile armed drones to turn 9/11 plotter Ayman al Zawahiri into mist. Joe Biden took a victory lap last night in a fashion reminiscent of Barack Obama. But, the Left spent the evening crowing that Trump was playing golf while Joe was presidenting. I kid you not.

Zawahiri is dead. Praise the Lord. The CIA got it right. We are all glad that Biden (or his puppet masters) made the call to go rather than dithering and recommending against it as he did with the Bin Ladin raid. Deanna posted the details of the Zawahiri drone strike and Biden’s self-congratulatory speech and you should read it here. We are euphoric that Allah has another dead terrorist, but we remember the 13 dead military personnel from Biden’s ill-advised pull-out from Kabul. We also remember those who were physically and mentally injured in the suicide bombing attack and are still deal with the wounds.

But, but, but, the Left and Never Trumpers bellow that Donald Trump played golf and hosted a golf tournament with a Saudi-owned golf league, at Trump’s Bedminster, New Jersey club. TDS clearly affects rational thinking. They have all forgotten when Barack Obama bowed to the Saudi King at the G20 summit in 2009. We’ll get to Joe Biden’s Saudi visit in a minute.

First up though, Maggie Haberman is the White House Correspondent for the New York Times and here is her stunning stupid take:

On a different track, the Biden administration killed bin Laden's powerful deputy as Biden's predecessor spent the weekend being criticized by families of 9/11 victims for his business relationship with Saudis, whose golf network he hosted at his club https://t.co/u4makpCP70

Poor Maggie. Ya gotta feel for anyone that STUPID. Yes, a few families of 9/11 victims did protest at the Bedminster facility. Miss Maggie has forgotten that the families had a statement when Joe went to Saudi Arabia:

“We appreciate the president’s commitment to do everything he can to support the 9/11 family community, but empathy is not enough,” Terry Strada, the national chair of “9/11 Families United,” said in a statement. “President Biden must do what past presidents have not, which is to demand transparency from Saudi Arabia and accountability for those who supported al Qaeda and the hijackers who murdered our loved ones.”

Who can blame them? The Bedminster protesters spoke out:

The group, 9/11 Justice, seeks to bring Saudi Arabian government officials, whom they assert supported the terrorists, to judgment. They are infuriated that Trump once agreed that the Saudi government was responsible, but has changed his tune, they said, to cash in on Saudi efforts to sanitize the nation’s global image through sports.

“How much money does it take to turn your back on your country, on the American people?” said Juliette Scauso, who was 4 years old when her father, the firefighter Dennis Scauso, perished in the attacks.

A popular Twitter theme is that Trump at the LIV event said that we hadn’t gotten to the bottom of 9/11. He is too right. We may taken out Bin Ladin and Zarahiri, but there is a lot more that is yet unknown.

A ton of conspiracy theories have been proved correct lately, Mr. Meidas. At least Donald Trump never went to the Saudis, hat in hand, to beg for oil. Don’t forget that Biden got shut down. No oil for you. Donald Trump made us energy independent and didn’t get 13 military personnel murdered in Kabul.

And, Donald Trump is not sitting in the Oval Office right now. Donald Trump didn’t re-open Terror University in Afghanistan either.

You know what really made the Left and Never Trumpers mad? Watch this video:

This was it. This is what hurt the feelings of the Left and Never Trumpers. It kept them from enjoying the well-deserved death of Zarahiri. The spectacle of Donald Trump with Representative Majorie Taylor Green and Tucker Carlson standing on the balcony at Bedminster while the crowd chanted “Let’s Go Brandon”. And, the Lefty angst is almost as good as Zawahiri being dead.