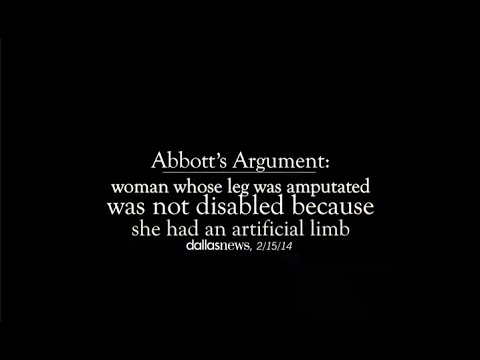 She has no answers for addressing the exploding costs of illegals invading her state. She has no answers to address the reports that ISIS is at her borders. Nor does she have answers on how to retain the robust Texas economy left behind by the retiring Rick Perry. So Perky Pink Sneakers, Wendy Davis, is doubling—or is it quadrupling?—down on what she does best: Exploit her opponent’s handicap in an attempt to use it for political gain, and then accuse him of doing what she just did. During a radio interview this week when asked if Greg Abbott is exploiting his disability:

Here’s the rest of her statement:

“That he suffered a tragedy and that he’s overcome it. And that’s to be admired. But the real point here is that while he rightly got his day in court, and he sued a homeowner and he sued a tree company, and he got millions of dollars, he has been fighting and his public service career, ever since, to close that door behind him. And that’s the real issue in this race.”

Greg Abbott’s disability is the “real issue in this race?” Not the economy, not national security, not the threat of homeland terrorism, not the annihilation of our healthcare system, not freedom from tyranny. No. It’s Abbott’s wheelchair. Well, one of you is “certainly making sure that people are aware” of that, Wends. It’s just that figuring out which one is which requires a mirror. And a lot of soul-searching. Keep digging, Wendy, you haven’t found the bottom yet.

But wait, Wendy, here’s a guy you can point your screechy, disabled-exploiting finger at and actually find the target: A typical Democrat politician trying to rake in every vote he can, not by offering good policy and honest debate, but by using not only the functionally disabled as props like Wendy Davis does ad nauseum, but by going one step further and exploiting a disabled young woman…who’s in a coma. Yes, you read that right. Take a look at Nebraska Democrat Dave Domina’s campaign ad:

Not surprisingly, the backlash against Domina, who is infamous for defending a Nazi war criminal he insists has “lived an honorable life” in the United States, was swift: 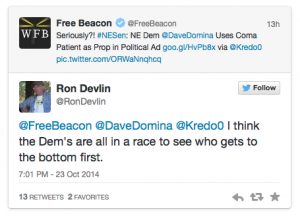 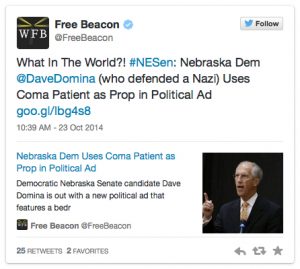 Of course, anyone with a compassionate bone in their body feels for this woman and her daughter, and we hope and pray for her comfort and an eventual recovery. But Democrats, whose policies have never worked anywhere, ever, never fail to show their true colors, particularly at election time when their real thirst for unlimited power is on full display. And yes, the Grand Ol’ Party has its own occasional exploitative cretin (I’m looking at you, Thad Cochran). Nevertheless, while they have successfully painted the GOP with the Brush of Bigotry, and managed to brainwash a significant portion of the voting public, the very sexism, racism, bigotry, and no-limits exploitation they claim the Right owns, has, in fact, wholly infected the Democrat Party. The only thing that ever amazes me, is that how anyone with one functioning brain cell can support these shameless, lying cockroaches.

And that poor soul, lying in a bed in a coma, just trying to survive, whose choice of whether or not to participate in a campaign ad was not her own? Well, you guessed it. She will most likely vote Democrat come November 4th. One way or another.