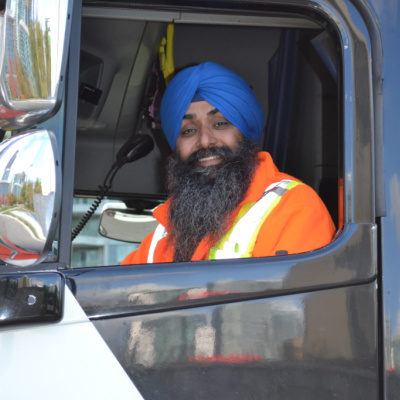 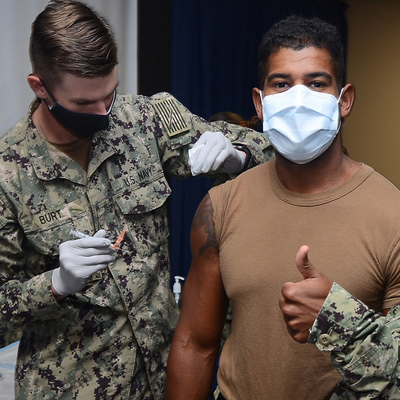 Covid vaccination rates are dropping across the United States, especially in some rural areas. Young adults are shunning the vaccine, too. According to the Centers for Disease Control, fewer than 1.1 million first dose shots are jabbing arms per day, as opposed to the nearly 2 million from just three weeks ago. Vaccine avoiders exist in places like Colorado, Oregon, and Michigan — all of which are blue states. So this isn’t a simple right-vs-left thing.

Scott Harris, public health officer in Alabama, thinks vaccination avoidance in his state is due to those white rural types who don’t trust the gubmint.

“Right now, the most hesitant group is white conservatives and they may be the most at-risk going forward.”

But is anyone really shocked at the drop-off rate in Covid vaccination? After all, look at the jumbled messaging from the CDC and their confounding charts, which merely tell you what you “can” do without telling you why. The chart ends with: Fully vaccinated people: Wear a mask.

So why would anyone be inclined to get vaccinated? Weren’t vaccines supposed to be our tickets to normalcy?

For example, on Monday the New York Times published an article entitled: Reaching ‘Herd Immunity’ Is Unlikely in the U.S., Experts Now Believe.

“Now, more than half of adults in the United States have been inoculated with at least one dose of a vaccine. But daily vaccination rates are slipping, and there is widespread consensus among scientists and public health experts that the herd immunity threshold is not attainable — at least not in the foreseeable future, and perhaps not ever.”

Well, that’s certainly going to inspire the hesitant to get their vaccines, isn’t it?

Dr. Marty Makary, Professor at Johns Hopkins School of Medicine & Bloomberg School of Public Health, had issues with the NYT article. That’s because the author failed to account for the natural immunity which occurs when people contract Covid and recover. Add these unvaccinated people to the vaccinated and you attain herd immunity.

The article dismisses natural immunity–fails to put any real number around it's prevalence which is upwards of half of unvax ppl. That factor changes the outlook. The article is correct that herd is not binary, and that CV will persist at low levels, as I stated in my Feb model. https://t.co/IXpwHJlKia

Never mind — fear sells, and the NYT peddles it.

So does MSNBC’s Joy Reid, apparently. She has received both Pfizer vaccines, and still jogs outside wearing not one, but two! masks. She also seems very proud of it.

Joy Reid says that she went jogging today while wearing two masks even though she is fully vaccinated pic.twitter.com/h7zFE9CzkW

“It can start with one person fainting that can set off a chain reaction of symptoms in anxious people who see or hear about that first person. These days, people also react to things they read or watch in Facebook posts or on other sites.”

And then they wonder why vaccination rates are dropping.

Plus, there are also the out-and-out jerks, like whomever runs this hotel in Chattanooga, TN. They don’t care. You’re gonna suffer with a mask anyway. So why get the vaccines? 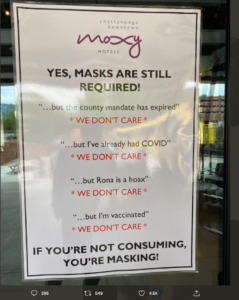 Finally, let’s look at the example set by the Big Guy, the Big Kahuna, El Presidente himself. Joe Biden still insists on wearing a mask, even though he’s had his vaccinations. The guy can’t even address a crowd outside unless he has his binky, er. . . mask. He panics if he can’t find it.

Joe Biden, who is fully vaccinated, loses his mask in his pocket.pic.twitter.com/zHW9Lq5r6P

Even Jake Tapper at CNN wondered why Biden still wears a mask, so he asked senior adviser Anita Dunn on Sunday’s State of the Union. Dunn hemmed and hawed while flipping her bridge or dentures or whatever in obvious discomfort before giving a non-answer.

You want to know why vaccination rates are tumbling? It’s not because of politics or anti-vaxxer conservatives or the Orange Man. It’s the messaging from elites in Washington, the media, and the current occupant of the White House.