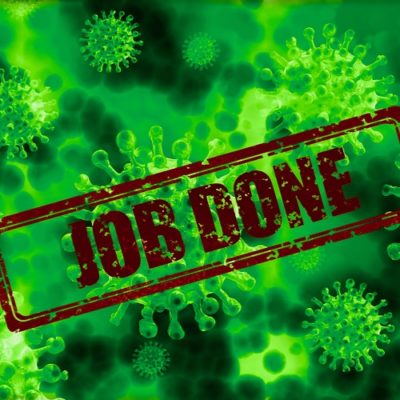 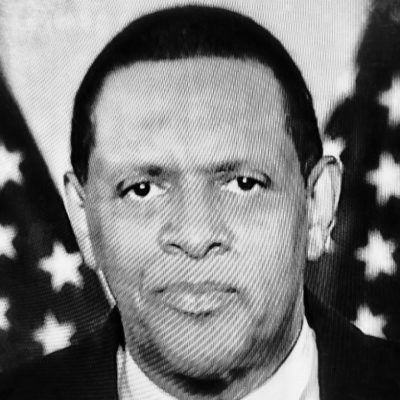 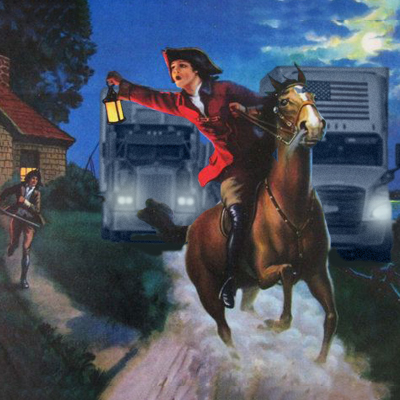 Well, no, the DHS didn’t channel Paul Revere. But it did warn that American truckers mimicking their Canadian cousins could disrupt life in the United States. Heck, they might even impede the Super Bowl or the State of the Union.

The DHS addressed the memo to its police partners, saying that the agency. . .

“. . .has received reports of truck drivers potentially planning to block roads in major metropolitan cities in the United States in protest of, among other things, vaccine mandates. The convoy will potentially begin in California early as mid-February, potentially impacting the Super Bowl scheduled for 13 February and the State of the Union address scheduled for 1 March.”

Plus, trucker groups have been organizing on social media, such as the “The People’s Convoy” which is planning a “March for Freedom Convoy to DC 2022.” Truckers will meet in Coachella, CA, on March 4 for a rally “to defeat the unconstitutional mandates.” After that they’ll leave California and head cross country, with more rallies along the way.

So what’s this all about? Why, vaccine mandates, of course. Moreover, Samir Kapadia of the Vogel Group, a business consulting firm, warns that if American protests are like those in Canada, there may be supply disruptions. And Joe Biden will get the blame for those, too.

“The unique element of this scenario is how a social protest around vaccine mandates crippled the supply chain—it wasn’t systemic. We’ve been facing supply chain constraints for almost two years, but this is the first time a social issue prompted such a significant collapse. Should this persist or U.S. truckers mimic the Canadian protests, the president will face greater scrutiny on a national level.”

So what’s a mandate-loving government to do?

Media Fear and Loathing of Truckers

Media reaction to the truckers has been derision which is now turning into fear.

For example, the ever-smarmy Fox News host Geraldo Rivera told the panel on “The Five” that he has a “big problem” with the Canadian truckers. That’s because there are swastikas! and Confederate flags! OMG! The horror! (Although Dana Perino questioned, “Confederate flags? In Canada?”)

Geraldo says his "big problem" with the "Freedom Convoy" is that there have been Confederate flags and swastikas among the protesters.

Jeanine Pirro immediately shouts him down.

"Don’t give me this nonsense 'somebody had a flag, I didn’t like it, and therefore they are racist'" pic.twitter.com/B32ZCdBvhA

Check out this supercut of media elites showing their contempt and loathing for those blue collar knuckle-draggers. Why, some of those goons even shouted “Let’s Go Brandon!” How dare they! And of course some media types invoked the name of Donald Trump, because he still leaves rent-free in their noggins.

You can practically see the venom dripping from their fangs as they speak.

And now a CNN reporter is afraid that the protests are “escalating by the hour.” She’s also heard rumors that protests are going to pop up elsewhere, too. Like the US maybe? Whatever shall we do when the great unwashed take over American roads? Why, the insolence of these lesser beings who refuse to listen to those who are better than them!

"Escalating by the hour." Anti-Freedom Convoy reporter Paula Newton from CNN declares the "fear is real" because "If this is the kind of civil disobedience that is tolerated … what can happen next?"
She was shaken by rumors that another protest was going to start somewhere else pic.twitter.com/8iSdcbe87U

Media and Government Gaslighting Us

So now our DHS and the media are wringing their hands over what might happen if Freedom Convoy Fever breaks out among American truckers. Hmm, the end of Covid restrictions, maybe?

But where were those self-righteous prigs when scenes like this were happening across the US in 2020? 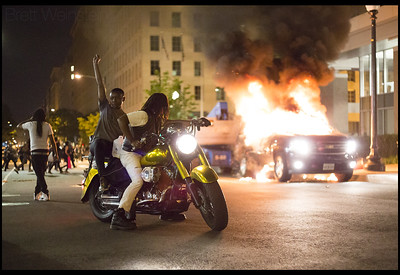 That image came from a George Floyd riot in Washington, DC, in May, 2020. And how could we ever forget CNN gaslighting us by describing the 2020 rampage in Kenosha, WI, as “fiery, but mostly peaceful protests”?

Or what about when New York Times writer Hannah Nikole-Jones claimed that “Destroying property, which can be replaced, is not violence.” Or when disgraced CNN reporter Chris Cuomo asked “Please, show me where it says protesters are supposed to be polite and peaceful.”

What a pack of two-faced hypocrites! As Red State writer Bonchie tweeted:

“Set cities on fire and murder people and CNN will call your protest “fiery but mostly peaceful.” Park some trucks and throw up some bouncy houses for kids and they’ll have a nervous breakdown.”

Then there are government elites, like then-Sen. Kamala Harris, who urged her supporters to help bail out the rioters in Minneapolis. And Rep. Alexandria Ocasio-Cortez (D-Dim Bulb) who tweeted: “The whole point of protesting is to make people uncomfortable.”

I wonder if she feels the same way about truckers protesting vaccine mandates?

Finally, do you remember Nancy Pelosi’s dismissive attitude towards vandals who in June, 2020, tore down a statue of Christopher Columbus in Baltimore?

She waved it off with a dismissive, “People will do what they do.”

Does that go for American truckers, too, Nancy?

Truckers Are Widening the Crack in the Narrative

Americans know that government officials have lied, and lied, again, and again, about the need for lockdowns. The need for us to swaddle our faces in cloth and paper to stop the Covid spread. And orders that everyone must take the vaccine in order to save America from scenes like the Black Death in medieval Europe. A vaccine that has not stopped the disease in its tracks, anyway.

So now there’s a chink in their Covid narrative, and Canadian truckers — of all people — are widening that breach. Soon to join them will be their American brothers to south, which has caused the DHS to sound the alarm. Meanwhile, Democrat politicians are dreading the midterm elections. And the media are clutching their pearls, terrified that no one will take them seriously anymore.