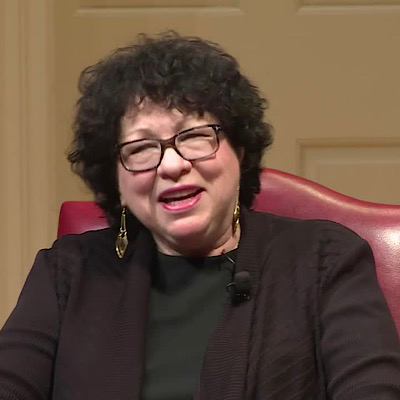 On Friday, the United States Supreme Court allowed the Texas Abortion Ban law to remain in place but has agreed to hear oral arguments on the law November 1st — including  whether the law’s provision allowing private citizens to bring suit against abortion providers – is permitted by the U.S. Constitution.

Cue liberal outrage. Associate Justice Sonia Sotomayor – AKA “The Wise Latina” – is not happy at all with her colleagues for letting the law remain in place and she let them know it.  I could use words to describe her dissent like fiery! compelling! or strong!  But frankly, the real word is predictable.

Just in case you’re not in the loop, the Texas Heartbeat Act, commonly called the “Texas Abortion Ban” law, blocks almost all abortions after a heartbeat can be detected which is about 4 weeks after fertilization, so a 6-week gestation. The law has, as expected,  infuriated many pro-aborts in Texas, and across the country, to the point of being apoplectic. They march, they scream, they make their little kids march and scream, whilst holding ghoulish signs and pressing their flacks in DC to prosecute someone, anyone. Of course pro-abort activists avoid mentioning anyone involved in abortion other than the woman getting one. If they have to, they will make vague references to the proverbial “clumps of cells,” but never embryos themselves, and certainly not specific developmental milestones like – wait for it – heartbeats. And a favorite talking point of the pro-abort crowd is the very real fact that women often don’t know they’re pregnant by the sixth week — which effectively bans abortions in the state altogether.

I’m ok with that.

Now back to The Wise Latina and her dissent.  You’ll want to read it in its entirety, but let me highlight three excerpts of her best “puissant” concerns. (I.D. notes removed because of easier readability.)

The promise of future adjudication offers cold comfort, however, for Texas women seeking abortion care, who are entitled to relief now. These women will suffer personal harm from delaying their medical care, and as their pregnancies progress, they may even be unable to obtain abortion care altogether. Because every day the Court fails to grant relief is devastating, both for individual women and for our constitutional system as a whole…

Next, the money quote.

The court also found that patients who are able to leave Texas have encountered restrictions and backlogs exacerbated by S. B. 8, citing evidence of the Act’s “stunning” and “crushing” impacts on clinics in Oklahoma, Kansas, Colorado, New Mexico, and Nevada.  An Oklahoma provider, for example, reported a “staggering 646% increase of Texan patients per day,” occupying between 50% and 75% of capacity.  A Kansas clinic similarly reported that about half of its patients now come from Texas.  The District Court found that this “constant stream of Texas patients has created backlogs that in some places prevent residents from accessing abortion services in their own communities.” I cannot capture the totality of this harm in these pages. But as these excerpts illustrate, the State (empowered by this Court’s inaction) has so thoroughly chilled the exercise of the right recognized in Roe as to nearly suspend it within its borders and strain access to it in other States. The State’s gambit has worked. The impact is catastrophic.

These ruinous effects were foreseeable and intentional. Were there any doubt, proponents of S. B. 8 have boasted in this very litigation that “Texas has boxed out the judiciary” and crowed that “[a]bortion . . . is a court-invented right that may not even have majority support on the current Supreme Court.”

…Because of the Court’s failure to act today, that relief, if it comes, will be too late for many.

There is no dispute that under this Court’s precedents, women have a constitutional right to seek abortion care prior to viability. As noted, S. B. 8 was created to frustrate that right by raising seemingly novel procedural issues, and it has had precisely the intended effect. Under such unique circumstances, the equities plainly favor administrative relief while this Court sorts out these issues. Every day that S. B. 8 remains in effect is a day in which such tactics are rewarded. And every day the scheme succeeds increases the likelihood that it will be adapted to attack other federal constitutional rights.

Prior to the Supreme Court, The Wise Latina, in her 11 years on the Federal Appeals bench, had never ruled directly on an abortion rights case – only on side issues.  Her judicial philosophy on abortion rights at the time of her SCOTUS nomination were unknown and both sides of the issue were more than annoyed at that.  However, in this short video from 2009 while in her SCOTUS nomination hearing, Sonia Sotomayor clearly says Roe v Wade is settled law.

Fast forward 12 years to today and there is no such polite endorsement or subtle acknowledgement of Roe v Wade in this dissent. Rather, The Wise Latina comes across as a total blood thirsty ghoul when it comes to the pre-born. And the leftist sycophants of the web? Well, they ate it up of course. Here’s just a small sample of the vast glorification across the Twitterverse:

Justice Sonia Sotomayor, once again speaking out all alone for the ones who need it most:https://t.co/jnMtEtw0b9 pic.twitter.com/N0e0EXKSpz

Poor guy. In his bloodlust, he clearly can’t spell. Just go ahead and add that “t” to the end of Elie’s “though(t).”

I've said this for a while. Sotomayor is who people though RGB was. https://t.co/7oWGimHqum

#SCOTUS conservative majority are made up of trash politicians hiding behind their sham law degrees.

Sonia #Sotomayor is a low key hero with her brilliant dissents. #abortionrights

Given the veracity of her dissent, and that she has already clearly signaled her opinion before hearing any facts from the upcoming case on 11/1, perhaps The Wise Latina thinks she has the right to put her finger down on the scales of justice. Nope. She alone isn’t the decider, thank God.  Personally, I’m putting a lot of time in prayer on this, and a lot of faith in the power of legal persuasion (to gain majority) by Thomas, Alito, and Gorsuch. And yes. I understand that there are many, even on the Right, who may think this law goes too far. I get that. I simply disagree. For me it’s a basic premise: how does a law recognizing and protecting the personhood of a pre-born child ever go too far?

Convince me.  I bet my life you can’t.

“Speak up for those who can’t speak for themselves…”  Proverbs 31:8

Featured photo used in this post is a screenshot cropped from the webcast “In Conversation with US Supreme Court Justice Sonia Sotomayor,” February 14, 2019. Library of Congress.