Previous post
And This is Why Selfish People Should Not Procreate

The Great Uniter Tackles the Biggest Problem of Our Time: Nicki vs. Mariah

The Great Uniter Tackles the Biggest Problem of Our Time: Nicki vs. Mariah 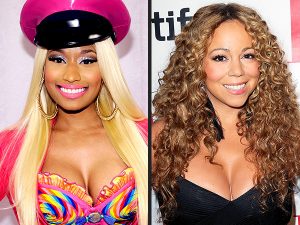 Man, it’s a good thing that the Middle East isn’t burning in a flood of anti-American violence, or that we’re not losing miserably in Afghanistan thanks to Obama’s restrictive ROEs, or that our economy isn’t going down the drain. Clearly, this is the most important thing Obama could be focusing on right now! Having solved all of our country’s problems, President Obama has moved on to truly pressing matters: the supposed feud between new American Idol judges, Nicki Minaj and Mariah Carey.

Naturally, a feud of such magnitude was top of mind when the president called in to radio host Michael Yo’s “The Yo Show,” and in a display of diplomacy we’ve come to know well from Obama, the president does not take a clear side on the feud, but he’s optimistic everything will be OK in the end.

“Can you repair the relationship with Mariah Carey and Nikki Minaj on ‘American Idol’?” Yo asked.

Not letting the president get off too easily, Yo asked Obama the hard-hitting question about whether he has a favorite between the two. “Mariah, she’s actually done some events for us. I’ve gotten to know her and Nick (Cannon), she’s a wonderful lady. Nicki I don’t know, but I’ve got her on my iPod.”

Ah, yes. Obama brings people together. I guess that explains all of the class warfare and race-baiting that’s taken place since he’s been in office, huh?