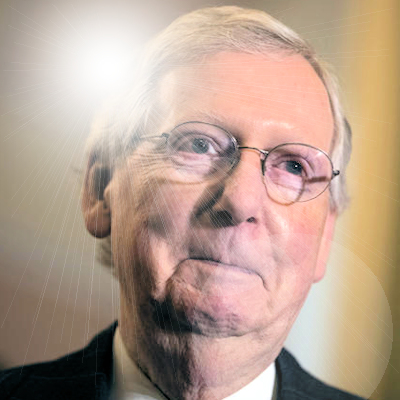 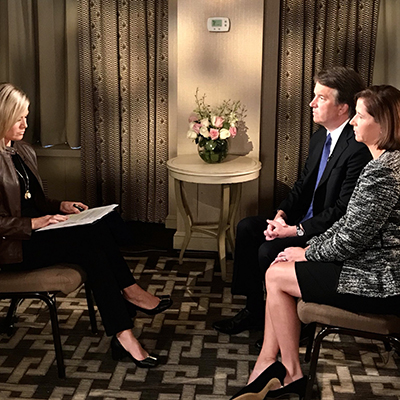 Even before Judge and Mrs. Kavanaugh’s interview aired on The Story with Martha MacCallum last evening…

…the liberal activists/morally bankrupt projectionists masquerading as objective journalists were already smacking them, and ironically their interviewer, around on Twitter.

Wife at your side, check.

Insulting to women much? Check. And how ironic. By the way, this woman has two children. What a great role model. And we wonder why so many kids bully their classmates, why they don’t practice critical thought, and why so many girls use cries of “sexual assault!” as a blunt-force weapon.

Funny how when a woman who has built an incredible career as a fair journalist is set to interview Kavanaugh, this is how the left reacts. They don’t care about fairness, they care about destruction. https://t.co/1th34em0Gk

And then there’s so-called “conservative,” Jennifer Rubin, who I’ve never seen utter one objective word about anything Trump-related:

having done Fox TV (and done is woodenly) he lowers himself to status of partisan hack. Doesn't bother to tell Senate his story first.

Oh, I see. Have you chatted with Ms. Ford about that not-bothering-to-tell-the-Senate thingy? By the way, Judge Kavanaugh HAS communicated with the Senate Judiciary Committee. Repeatedly. Try to keep up.

Kavanaugh's letter to the Judiciary Committee is here: https://t.co/Egc0cGGysz

Of course, know-nothing, D-list celebrity Alyssa Milano climbed out from beneath her slime-covered rock to throw stones at Kavanaugh, again, without giving him any presumption of innocence, or even bothering to, well, watch the interview:

Kavanaugh is going on @FoxNews tonight, AKA the, “where accused people go to try and salvage their lifetime appointment on the Supreme Court” channel.

Right. Where he was interviewed by…a woman. But Milano’s a champion of women or something. Unless, of course, you don’t toe her man-hating feminist line and happen to—gasp!—think for yourself. And ask substantive questions.

Meanwhile…thank heavens for the calm, rational, critical thinker that is David French:

-Was a virgin through high school and beyond.

-Was never at a party at a location matching the description in Ford’s allegation.

These are specific claims.

And the always-fair Guy Benson:

Astonishing that Brett Kavanaugh has to defend himself against gang rape charge for which there is no evidence. TMI 'virgin' moment in Fox @marthamaccallum interview was in response to that. Michael Avenatti must be delighted.

Martha McCallum is asking this brilliant nerd if, as alleged, he ever gang-raped anyone. This is insane. The unhinged left has somehow reached a new low https://t.co/7gkwayrNfb

Anyone else need a Clorox Bleach shower? 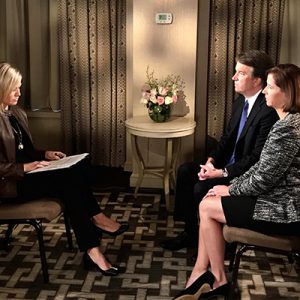 To this objective viewer, the Kavanaughs appeared sad. And tired. And a bit shell-shocked. But they also appeared resolute.

Imagine for a moment that you’re facing the full weight of the Democrat machine—no doubt in my mind puppeted by a certain former president and a decrepit old billionaire—coming down on you like a proverbial ton of bricks, while the wayward #MeToo movement is grotesquely exploited to sully your history, one that’s filled with nothing but stellar judicial decisions, community service, and commitment to family. How would YOU handle it? I’d suggest that the Kavanaughs are brave beyond measure, and displayed last evening the reason a man of his character belongs on our Supreme Court: he’s calm, thoughtful, measured, and a fighter, and he’s “not going anywhere,” Mazie Hirono (Femocrat, Hawaii). And that’s precisely the kind of justice we need in this country right now, where a mere accusation is enough to shatter the life of another human being.

Meanwhile. The media, and their Hollywood counterparts, continue to be utterly perplexed as to why so many of us—from all political persuasions—don’t trust anything they say or print. And yet, they continue to shamelessly function as activists for the DNC, anyway, rather than reporting the news fairly and without bias. It seems to me that those obvious partnerships could be considered in-kind donations to the Democrats.

Paging the FEC. And maybe a campaign finance violation case could even weave its way to the Supreme Court one day. You know, the court on which Justice Kavanaugh will hopefully soon be sitting.